DesdemonaDespair notes in timely fashion that Insurance Networking News reported on a meeting March 1, between representatives from the insurance industry and US Senators, to discuss the increase in damages from extreme weather events. 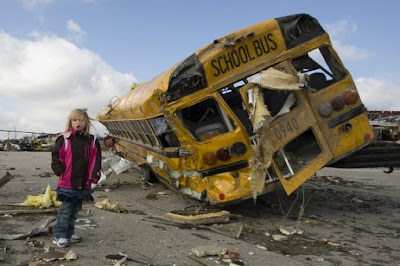 At moments like this I wonder why anyone should worry about trees dying slowly from absorbing toxic air pollution, when it looks like we're about to kill them much more quickly with violent storms spawned by global warming. 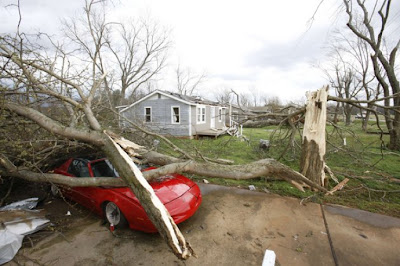 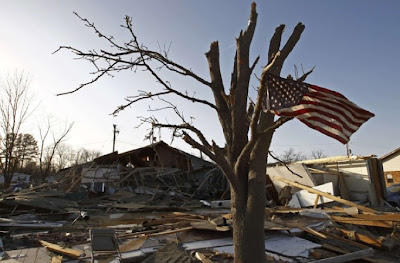 "The politics of global warming have typically involved much debate as to the role climate change plays in growing weather-related risk.  Yesterday, however, at a Capital Hill a press conference on the cost of climate change, debate was not on the agenda." 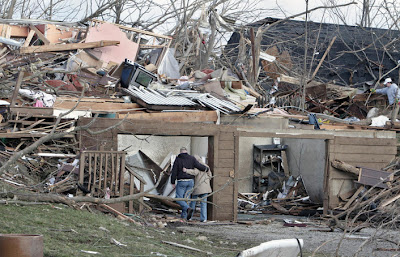 "Pointing to a year of history-making, $1 billion-plus natural disasters, representatives of Tier 1 insurance companies took a definitive stance with members of the U.S. Senate to confirm that costs to taxpayers and businesses from extreme weather will continue to soar because of climate change." 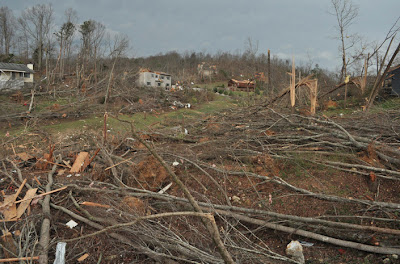 "Representatives from The Reinsurance Association of America, Swiss Re and Willis Re and Ceres, a nonprofit organization that leads a national coalition of investors, environmental organizations and other public interest groups working with companies to address a variety of sustainability challenges, joined Sens. Bernie Sanders (I-Vt.) and Sheldon Whitehouse (D-R.I.) yesterday to discuss the growing financial impact of global warming." 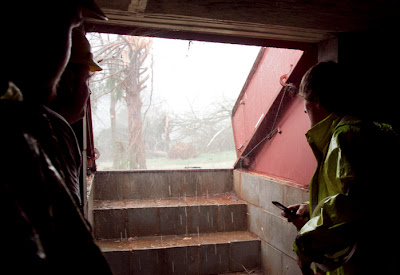 "'From our industry’s perspective, the footprints of climate change are around us and the trend of increasing damage to property and threat to lives is clear,' said Franklin Nutter, president of the Reinsurance Association of America. 'We need a national policy related to climate and weather.'" 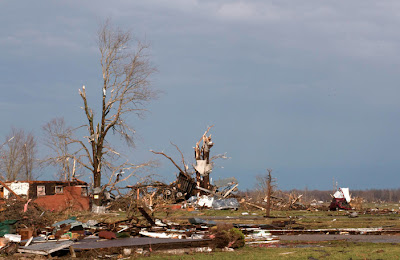 "Property and casualty insurers in the United States experienced an estimated $44 billion in losses last year when hurricanes, droughts, tornadoes and other natural disasters were more severe, longer, more frequent and less predictable than in the past." 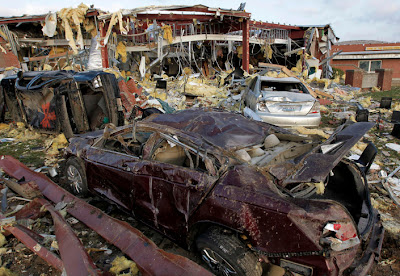 Of course, all the way back in 2008 the insurance giant MunichRe harbored little doubt that they are convinced climate change was already posing problems, and issued the following press release:

"Torsten Jeworrek, member of Munich Re's Board of Management: 'This continues the long-term trend we have been observing. Climate change has already started and is very probably contributing to increasingly frequent weather extremes and ensuing natural catastrophes. These, in turn, generate greater and greater losses because the concentration of values in exposed areas, like regions on the coast, is also increasing further throughout the world.'" 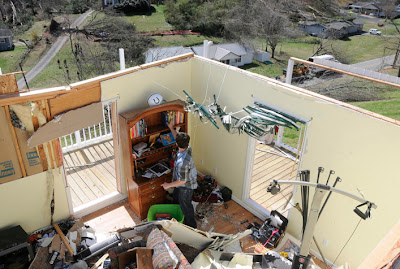 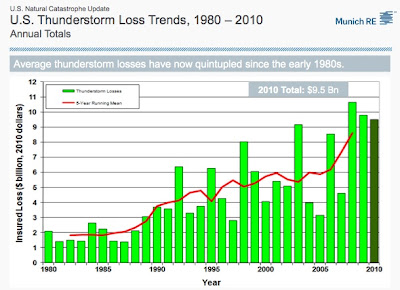 They had to construct a completely new chart for 2011, which dwarfed prior calculations:

Here are two other charts from their 2011 reports which were published this past January: 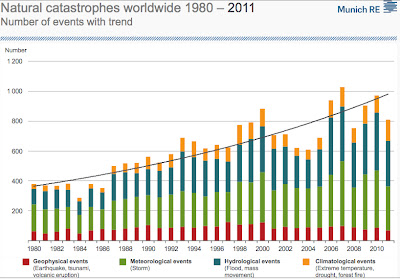 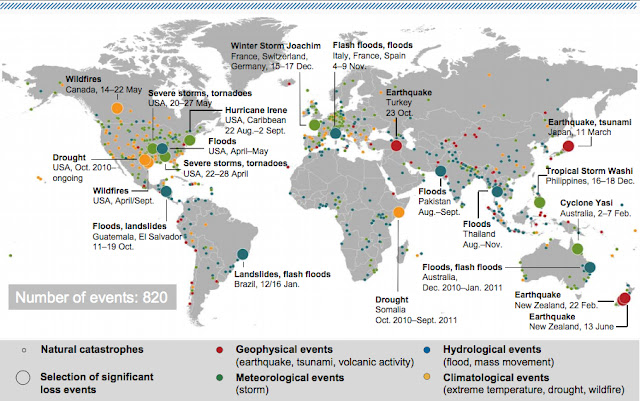 This most recent onslaught is even more terrifying because it is early in the season for tornados. 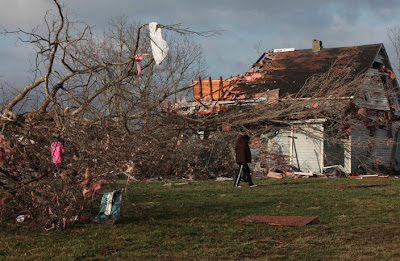 The sheer number of storms and the geographic spread are also mind-boggling. 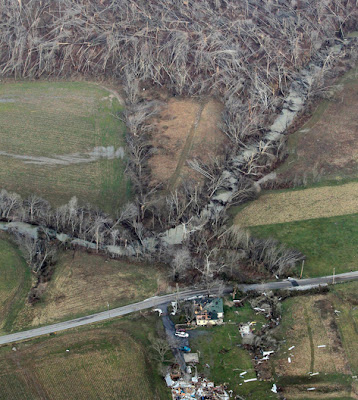 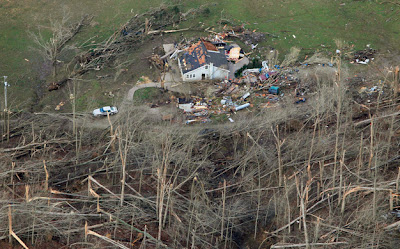 "The spate of storms was the second in little more than 48 hours, after an earlier round killed 13 people in the Midwest and South. They were the latest in a string of severe-weather episodes that have ravaged the heartland in the past year." 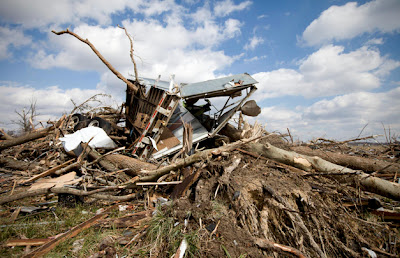 "Friday's violent storms touched down in at least a dozen states, killing 19 people in Kentucky, 14 in Indiana, three in Ohio, and one each in Alabama and Georgia." 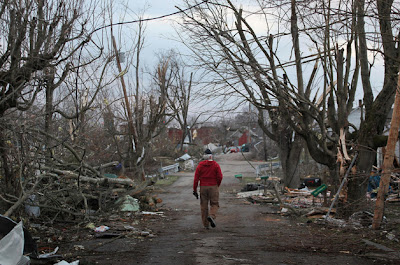 This woman was reunited with her rescued cat, named Thumbelina, a character whose whimsical adventures made it one of my most beloved Hans Christian Anderson fairytales, when I was young and read them all, over and over.  I really can't think of what to say about scenes of such heartache, so I'll end with a quote. 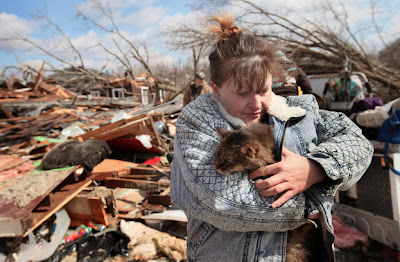 “Life will break you. Nobody can protect you from that, and living alone won't either, for solitude will also break you with its yearning. You have to love. You have to feel. It is the reason you are here on earth. You are here to risk your heart. You are here to be swallowed up. And when it happens that you are broken, or betrayed, or left, or hurt, or death brushes near, let yourself sit by an apple tree and listen to the apples falling all around you in heaps, wasting their sweetness. Tell yourself you tasted as many as you could.” ~ Louise Erdrich, The Painted Drum 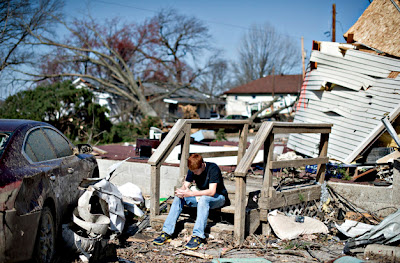 Cupcakes for a 12-year-old's birthday party were left to cool on the counter minutes before disaster. 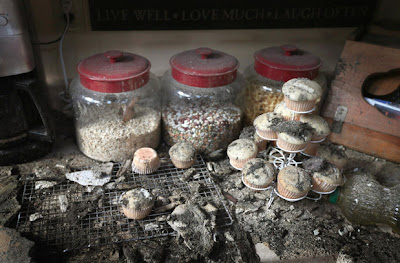 Photo credits here and here
Posted by Gail Zawacki at 9:35 AM