"The Guns That Smoked" - how the 1% stays in power


An anonymous "Insider" has published an unsurprising but still infuriating exposé in CounterPunch, detailing coordinated attempts by mainstream political front organizations to promote a massive and cynical campaign, the "99 Percent Spring".  This amounts to a transparent attempt to purloin the honest revolutionary fervor of the Occupy movement and harness that energy away from genuine change and towards the reelection Obama - and of course ultimately to perpetuate the very failed system that OWS has so courageously challenged.  Following are some excerpts - I recommend reading the whole thing, of course!  And please share. 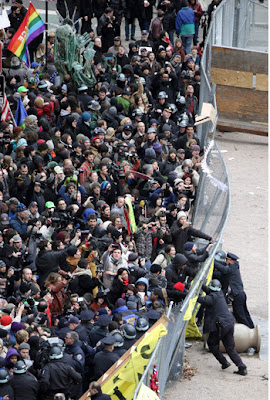 Smoking gun one: A WhoIs domain name search yields that The99Spring.com was created on February 9 and the Administrative Contact is none other than MoveOn.org Co-Founder, Wes Boyd.
Smoking gun two: The homepage of The99Spring.com includes a hot link that reads“Get Involved in the 99% Spring.” A click on the link takes you directly to a MoveOn.org “99% Spring Action Training” webpage, where you can either sign up for a listed 99% Spring Training in one’s respective locality, or create your own training.
Smoking gun three: A look at the bottom of the webpage shows the website was designed by Agit-Pop.com. Agit-Pop.com is the website for Agit-Pop Communications, a public relations firm which describes itself as “an award-winning one-stop creative studio delivering strategic messaging, cutting edge New Media and boots-on-the-ground campaigning to the progressive netroots.”
At the very top of its list of clients? MoveOn.org, but of course.
Smoking gun four: A conference call to prepare leaders for trainings will be lead by a MoveOn.org Field Organizer, David Greenson on March 14, according to a 99 Spring email blast.
Smoking gun five: The 99 Spring sent out an email with a subject line that read, “Become a 99% Spring Trainer” from Liz Butler and Joy Cushman. The question then is who are these two?
Butler, her LinkedIn page shows, is the Campaign Director for 1Sky, which in April 2011 merged with 350.org to become known simply as 350.org, the organization chaired by journalist and climate activist Bill McKibben.
Cushman, on the other hand, is the Organizing Director of the New Organizing Institute (NOI), a Democratic Party-aligned, MoveOn.org-aligned front group. NOI hit the ground running in 2004, according to the NOI website, explaining,

“Like the Leadership Institute on the right, the NOI would become the ‘go to’ place for technical and strategic training. We’d begin by training and placing newly trained Internet campaign professionals (online organizers, Internet directors) on dozens of 2006 campaigns. Candidates and organizations, frustrated by their own inability to generate [Howard] Dean or MoveOn[.org]-like results online, would be eager to accept these students, taught by ‘the best in the biz.’”

This portion of the website has since been scrubbed, but can be found via the WayBack Machine.
Eli Pariser, Board President of MoveOn.org, served on the original Advisory Board of NOI, as did MoveOn.org Co-Founder, Joan Blades.
James Ruckers was also included on the initial NOI Board of Directors, who now serves as Executive Director of MoveOn.org’s solidarity with people of color front group, Color of Change, which he co-founded with Van Jones in the aftermath of Hurricane Katrina. Ruckers formerly served on MoveOn.org’s staff as Director of Grassroots Mobilization from the fall 2003 to summer 2005, according to NOI’s website.
A key original NOI staff member included Co-Founder Zach Exley, who now serves as Chief Community Officer at Wikimedia Foundation. Exley worked atMoveOn.org from January 2003–March 2004 and served as NOI’s President from January 2006-April 2010. He also served as Director of Online Organizing and Communications for the John Kerry for President campaign in 2004, all of this according to his LinkedIn account.
NOI’s Inaugural Training took place in late-February 2006 and was described as

“including individuals from Moveon.org, the Kerry and Dean campaigns, the Democratic National Committee, and leading internet consulting firms. NOI trainees did not simply learn the best practices of new organizing – they learned those practices from the best in the field.”

Trainers in the house that cold late-February included two MoveOn.org staffers: Tom Mattzie and Rosalyn Lemieux, who have since moved on (excuse the pun) to stints as a consultant and as a Partner at Fission Strategy, respectively. Exemplifying the revolving door of the Democratic Party non-profit foundation-funded front groups, Lemieux formerly served as Executive Director of NOI from August 2006-2007 before eventually moving onto her current stint at Fission.
Smoking gun six: Recent emails I obtained from the New Organizing Institute show that MoveOn.org and NOI are by-and-large, interchangeable, revolving door type entities that share lists, staff time, and common goals: electing Democrats, cloaked as supporting grassroots, democratic (with a lower “d”) political action.
These emails came from the NOI’s Cristina Sinclaire from the email address 99spring@neworganizing.com. According to her LinkedIn profile page, Sinclaire formerly served as Field Coordinator for the Maryland Democratic Party and as a Field Organizer for Obama for America in 2008 in Ohio, demonstrating her loyalty to the Democratic Party cause. Her Twitter page’s background picture is of a young Barack Obama.
Smoking gun seven: 350.org, it appears, is also “in on this game,” so to speak, as Bill McKibben has signed onto The 99 Spring’s “call to action.” Furthermore, 350.org organizer Joshua Kahn Russell, formerly of the Ruckus Society and Rainforest Action Network, also sent out an email blast on the 350.org list promoting The 99 Spring’s “week of action.” In that email, Russell writes,

“I met about half of you folks who were arrested at the Tar Sands Action last summer when I helped lead our nightly civil disobedience trainings to prepare for the action at the White House.
I’m writing you now, 6 months later, about an opportunity we have to expand and deepen the movement we helped build last summer, in coordination with a whole bunch of other organizations who are beginning to embrace the tools and strategy we put to work in Washington DC.
The opportunity is The 99% Spring, an initiative to train 100,000 people in peaceful direct action this April, empowering people all over the country with the skills and inspiration we need to transform the country. It’s wildly ambitious, and we’ll need to come together in a big way to pull it off.”

Russell proceeds to ask those on the list serve either to sign up to host a training, or volunteer as a trainer, the former request taking those on the list to MoveOn.org’s sign-up page.
Smoking Gun Eight: The Nation magazine self describes itself this way: “The Nation will not be the organ of any party, sect, or body. It will, on the contrary, make an earnest effort to bring to the discussion of political and social questions a really critical spirit, and to wage war upon the vices of violence, exaggeration, and misrepresentation by which so much of the political writing of the day is marred.”
In reality, the Nation is heavily hyping MoveOn’s 99 Spring, made clear by the cover of its April 2, 2012 edition, which is a special issue dedicated to the cause.
As grassroots organizer Kevin Zeese points out, there is a genuine (as opposed to manufactured and illusory astroturf) Occupy Spring forthcoming, called for by the true grassroots. The Nation conveniently leaves that one out of its issue, of course.
“What makes The Nation ‘Occupy Spring’ issue — giving Occupy to the MoveOn types – is that there is actually is an American Spring going on,” said Zeese. “All over the country Occupy remains active and we have an upcoming event called National Occupation of Washington, DC, to begin the weekend of March 31 and April 1 that 25 Occupies have endorsed, which The Nation did not even mention.”
This skunk gets even more stinky. One of the featured contributors of this issue, penning an article titled, “Occupy is Dead! Long Live Occupy!” for this issue, was Ilyse Hogue. She is now a full-time writer at The Nation.
“With a spirit of inclusiveness that mimics the slogan, established institutions from MoveOn to National People’s Action to the United Auto Workers are investing collective resources into The 99% Spring, a massive training project that aims to train 100,000 people in nonviolent civil disobedience and economic literacy,” wrote Hogue in her article, a shameless plug for The 99 Spring.
According to her biography on the website, she “…is a social change practitioner, media consumer and analyst, and on-line engagement expert.” Hogue worked at a Democratic Party front group Media Matters for America in 2011 as a Senior Adviser before coming to The Nation in 2012. The smelliest tie of them all: from 2006- 2011, Hogue served as Director of Political Advocacy and Communications for none other than MoveOn.org.
Coming full circle, Hogue also serves on the Board of Directors of Rebuild the Dream, a Van Jones lead Democratic Party front group co-created in June 2011 with MoveOn.org, according to an article by The Nation’s Ari Berman. Rebuild the Dream, many will recall, was one of the key front groups attempting to co-opt Occupy Wall Street last fall, as uncovered by Kevin Zeese.
This skunk stinks!
Posted by Gail Zawacki at 1:58 PM