Both of these gentlemen explore language, and what it means to name something. To progress from just seeing something to actually naming it is a breathtaking leap. 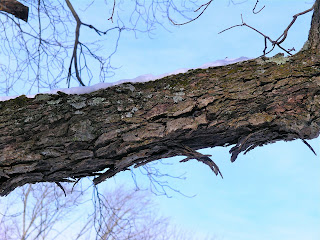 Well, there is no name that I can find for "falling off bark" but I did finally locate the proper term for one of the other things I see happening, on trees, which is the proliferating growths. 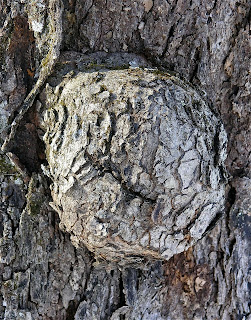 It is a canker. This defining has horrible and important implications, but more on that later - first, at the behest of my new-found French friend, I have a photograph of one of his Arbres Venerables. It is in Basking Ridge, in front of the church in the center of town. 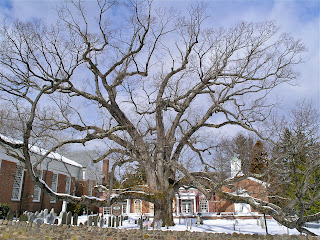 Of course, I don't want to find forebodings of demise...but I inevitably do. To the right of this tree, in the back of the annex, resides a rather substantial cryptomeria. 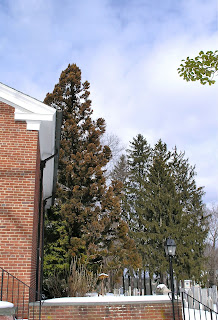 And it is slowly frying in a bath of toxic greenhouse gases. But hey! Some nice fellow saw me taking pictures, shivering in a howling wind, and invited me inside. 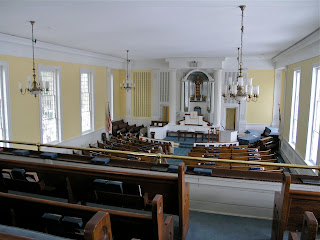 Anyone who knows me would expect me to be gasping like a fish out of water in the interior of a church, because I am a life-long, unabashed atheist. But, I also love tradition, and revere classical architecture, and quality of craft. This church is suffused in light and quiet dignity. 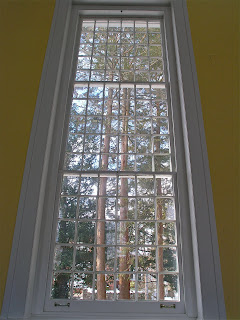 The windows on the opposite side of our tree are sublime with conifers. I grew up in a house built in 1720, in a town with more 17th century homes still intact than anywhere else in the US, and so I love old multi-paned windows, with wavy, bubbly glass. 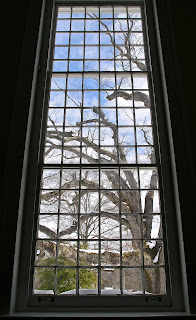 Here is a view of The Tree. 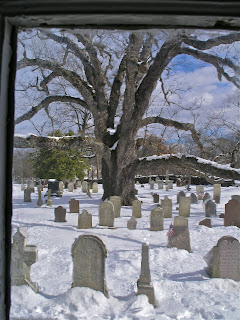 This is through just one pane. The wiggly lines that define the edges of tombstones are because the hand-blown glass is distorted. It actually gets wider at the bottom over time, sinking from gravity. 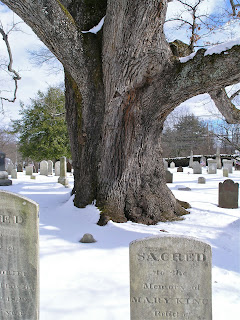 Back outside, the trunk has a reddish hue in places, a rather new phenomena I have observed that is becoming more common. 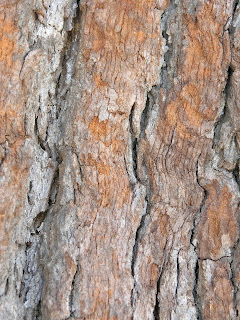 In this instance it looks like it is from exposure, 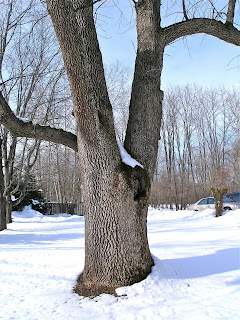 But on this tree it looks more like a growth on the surface. 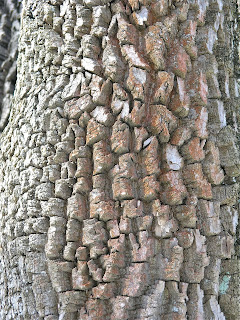 Next door to it, is a tree losing bark, 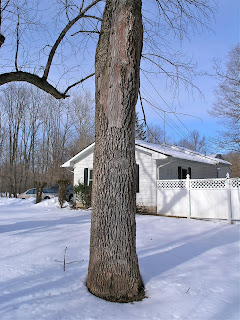 which also has the spreading red pigment. 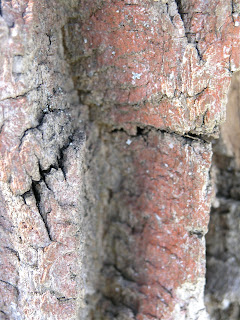 Many trees are sprouting cankers up and down their trunks. 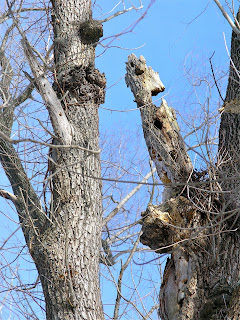 and everywhere, branches are breaking off. 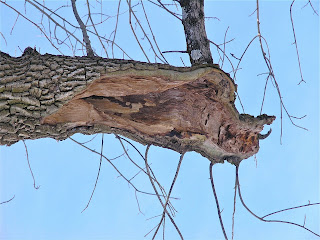 A bit further on is the entrance to an historic estate. 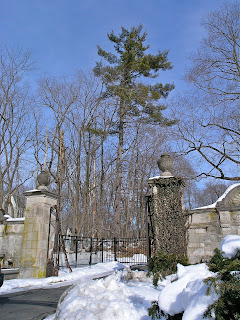 This yew in front of the gate has been fascinating me for some time. 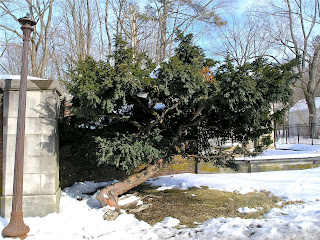 The trunk is getting more and more colorful. 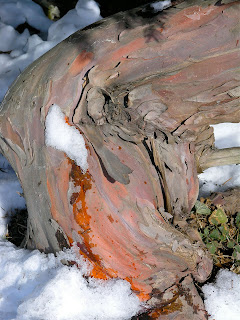 Even the bricks have strange growths. 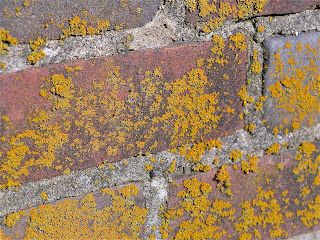 One of the first things I learned when I started searching the intertubes for information about tree troubles - such as drooping, singed, scorched, or discolored leaves, thin crowns, and broken branches - is that once such symptoms of decline are visible, the tree is going to die. The only question is will it be completely dead in one season, or three, or a decade. 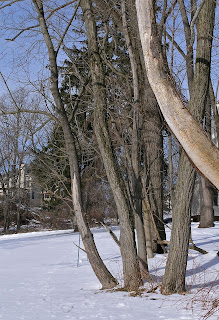 So I have known since the summer of 2008 when I found this webpage that all the trees are dying, and have been struggling with that information and all the terrible implications that follow from the wholesale death of trees. I have been trying to inform people in the hopes that we can slow down or reverse the damage. It would be nice if trees didn't go completely extinct.

Nevertheless, the last week or so have been, let's say, a challenge to equanimity. It's becoming glaringly obvious that every tree still standing is going to die very soon, whether we figure out what's causing damage to them and change it, or not. There are several things that lead inexorably to this very perturbing conclusion. 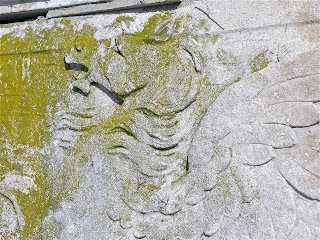 One is, the incredibly rapid and universal death of conifers. You can drive along the freeway for miles and not see a single healthy conifer. For the most part, there is no green in the landscape at all, because they have dropped their needles entirely and blend in with the leafless deciduous trees. Of those who retain needles, they are very thin, and the colors are unnaturally yellow, purplish, or red. Stands of cedars look like they are blistering, on fire. 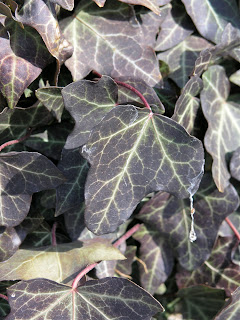 Last fall, green ivy started turning red, and florists were all excited to include it in holiday arrangements. Now the ivy on the column has turned black, with prominent veins. This inability to produce chlorophyll is fundamentally what is killing vegetation. 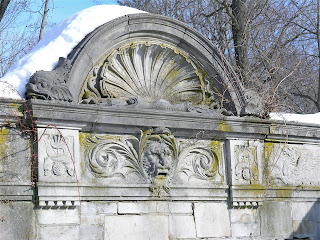 Another portent is the proliferation of weird growths on trunks and branches. These cankers, according to wikipedia, are usually lethal:

Some cankers are treatable with fungicides or bactericides, but many are not; often the only treatment available is to destroy the infected plant to prevent the disease from spreading to other plants.

If you take a look at the article, you'll find that cankers are the result of various fungi; that's why it's important to note that according to the study in Wisconsin linked to here, trees exposed to ozone are more vulnerable to all sorts of pests and disease and opportunistic parasites. 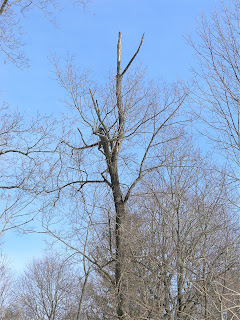 Perhaps the most disturbing sign that trees are doomed is the splitting and falling of bark from trunks and branches, and the gaping holes that are multiplying in number and growing in size. 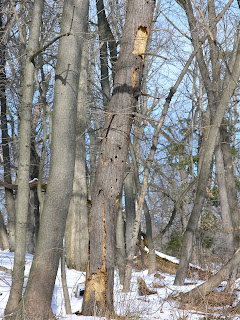 This is occurring on trees of all ages. 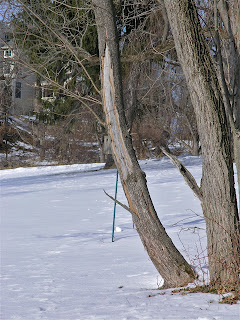 Just in time to cheer me up, it turns out that the Forest Ecology Network, which I had thought was moribund because their last newsletter was from Fall 2008, published a newsletter in January. Check out the titles in the table of contents:

Have We Passed the Tipping Point - page 2

For Obama, No Opportunity Too Big to Blow - page 4

Too Late? Why Scientists Say We Should Expect the Worse - page 8

Why Politicians Will Not Save Us - page 10

Why the Congress’ Climate Bills Will Not Work - page 11

The Most Important Number on Earth - page 20

This collaboration represents a rather rare conjunction of ecology and climate change science. To an unfortunate degree, people concerned with the environment and pollution and those concerned about climate change from CO2 work in tandem but are not integrated. Then there are the Peak Oil types who are mainly concerned about the breakdown of our civilization, which is totally and fatally dependent on cheap fuel. On occasion members of these groups are actually antagonistic towards each other, which is insane.
It's pure speculation on my part but since I am concerned about all three and follow their debates, I have posited that the climate change types are mostly scientific (although this will change as the effects become more obvious); the Peak Oil people are techy, or financial types, and are terrified of losing their ipods and other gadgets; while the environmental types are leftist hippies concerned about world justice and scrambling to obtain funding for their "save the whale/polar bear/rainforest" not-for-profit charity - not necessarily in that order.
In other news...
Oh Goody, we live in the most amazing times! The oceans haven't been acidifying this rapidly for 65 MILLION YEARS! The predictable outcome of this is explained comprehensively in this Yale 360 article.
Click here for nature photo contest entries - they are all beautiful!
Posted by Gail Zawacki at 7:25 PM