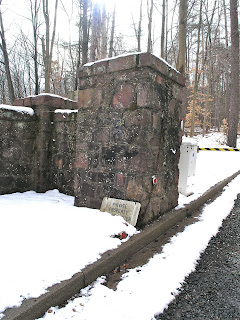 I pass this gate on a regular basis. It's obviously private property, and I don't know who it belongs to. 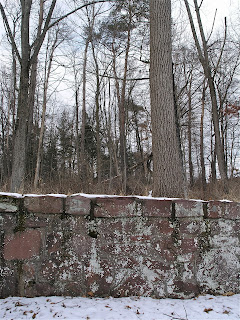 It has been amusing me to watch the lichen spread on the stone wall, it almost looks like it is being gradually whitewashed. I could see from the crowns of the trees beyond the wall that they are dying. 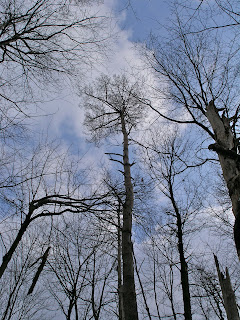 I decided to climb over the wall and have a peek. 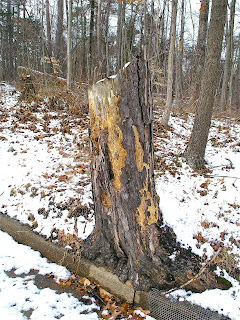 With the exception of trees that threaten the driveway, like the one above, nobody has been cutting or clearing the fallen branches and trunks, so it's possible to get a good sense of just what percentage of trees are dying in this location. 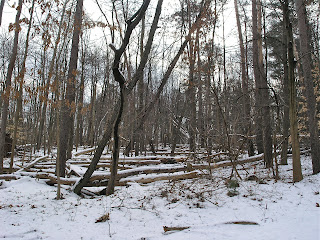 And I would estimate it's close to 100%. In addition to all the logs on the ground, the standing trees uniformly exhibit symptoms of decline. 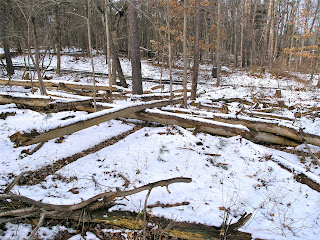 It's an incredible sight. 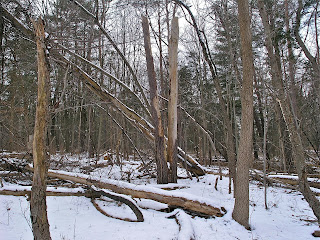 Sometimes, the trees break at some point along the trunk, and in other cases they keel over bringing up huge clumps of roots and dirt. 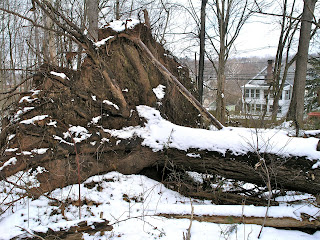 These roots ripped out of the earth are much taller than I. 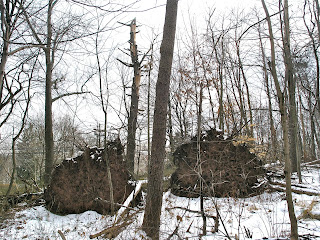 Here it is clear that the standing trees will soon join those already lying on the ground. 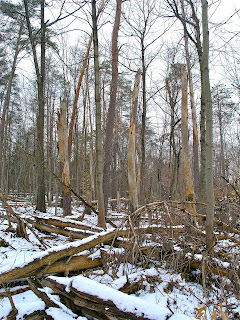 Some stumps are hardly recognizable. 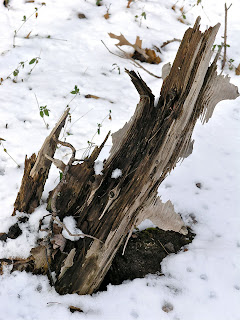 Think how many must have already rotted away to the point where they are not there at all. 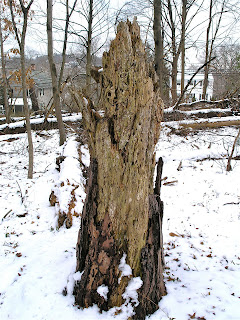 There were no young trees that could regenerate the forest, other than a few seedlings like this one, from the past year. Nothing from a foot high to 10 or 20 feet. 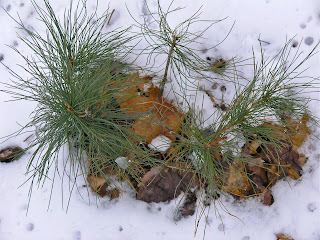 The storm story on the front page of HuffPo is headlined: “Epic Snowstorm Batters East Coast: Trees Are Starting to Come Down”

Please note, trees are not supposed to fall down because it is snowing. Trees evolved to survive much worse snowstorms than this (note the very last excerpt below). If it was normal for them to fall down because of snow, they would have all fallen down by now and we wouldn’t have any left.

There are many areas of untouched woods, where there are more trees lying on the ground than there are standing. Why? We are poisoning them with toxic greenhouse gases. They cannot breathe (photosynthesize) in the atmospheric anarchy of our fuel emissions.

Here are sections from the article. We can expect much more of this as the dying trees fall:

“A blizzard battered the Mid-Atlantic region Saturday, with emergency crews struggling to keep pace with the heavy, wet snow that has piled up on roadways, toppled trees and left thousands without electricity.

“Things are fairly manageable, but trees are starting to come down,” said D.C. fire department spokesman Pete Piringer, whose agency responded to some of the falling trees.

“Maryland Transit Administration spokeswoman Jawauna Greene said the underground portion of the Metro could reopen later Saturday but it depended on the weather conditions.”

“We have trees on the overhead wires, trees on train tracks. We can’t get anything out,” she said.

“Hundreds of thousands of customers across the region had lost electricity and more outages were expected to be reported because of all the downed power lines.”

“The biggest snowfall for the Washington-Baltimore area is believed to have been in 1772, before official records were kept, when as much as 3 feet fell, which George Washington and Thomas Jefferson penned in their diaries.”

This link is to an article at Climate Progress, about the EPA decision to push for more use of biofuels. In the comments I have been trying unsuccessfully to find out who, if anyone, is taking into consideration the effects of emissions from burning ethanol. It seems not even those who are enlightened about climate change want to deal with that question!