There has been enough research to prove that ozone damages vegetation, and reduces tree growth. Here is a report sponsored by our very own Department of Energy that says so. But it's from 1995! Where have the alarm bells been for the past fifteen years? I will write them to ask, but in the meanwhile, I have other questions. 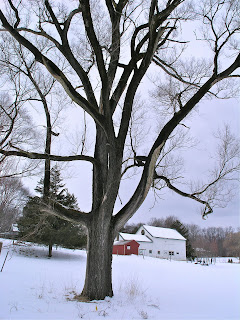 Since ozone has been around for decades, what is causing so much curious new phenomena? Like this absolutely amazing white streaking, on this tree - and there are others developing the same markings - which looks as repugnant and nasty as Cruella deVille!

This bizarre contrast on bark is unprecedented. 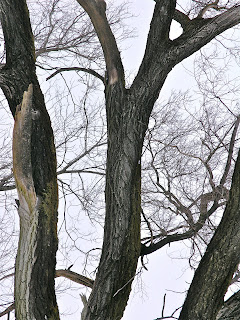 What can explain it? Is it biofuel emissions? Mercury or nitrogen deposition? 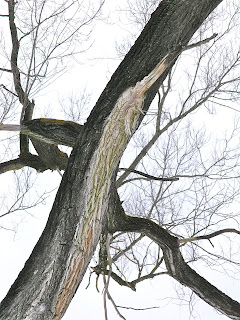 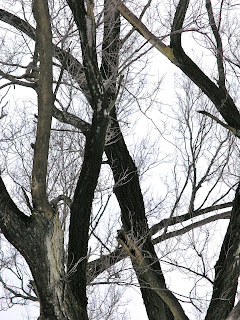 All I know is, something is terribly, lethally, awry. 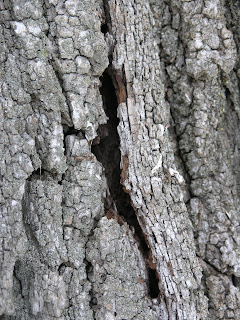 Add to this strangeness the lichens that are spreading like wildfire; the rapid appearance and growth of cankers; bark splitting and falling off, and turning all sorts of weird colors from pitch black to lurid bright green to red, holes, and weeping, bleeding sap - all of which is photographed on this blog - and one has to conclude, something new and hazardous is lurking invisibly in our atmosphere. 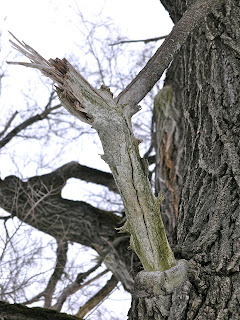 Here's another inexplicable and new occurrence: After the very heavy snow, many evergreen shrubs had their branches bent by the weight. They went from looking uniformly brown or yellow, to revealing the inner layers, which are still bright green! This is noticeable on cedars, yews, and here, as pictured on some arborvitae. 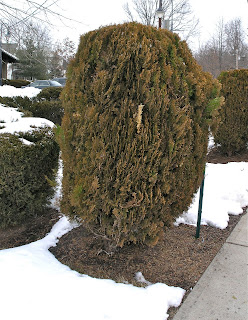 Why should the outer tips be singed and the inside remain green? 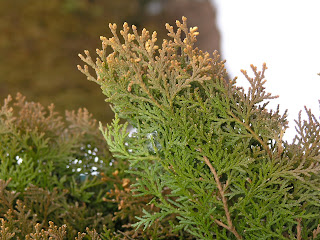 I don't know, and can only hazard some wild guesses. Is there too much UV radiation filtering in, burning the exposed layers? Is it the crazy fluctuation of temperatures? Is all the toxic soup of volatile organic compounds reacting to the proliferation of cell phone radiation? 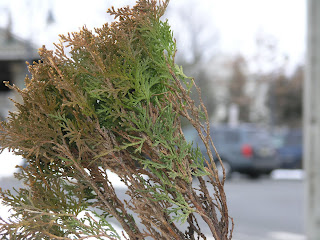 Emily Dickinson said:
Hope is the thing with feathers
That perches in the soul,
And sings the tune without the words,
And never stops at all,
And sweetest in the gale is heard;
And sore must be the storm
That could abash the little bird
That kept so many warm.
I've heard it on the chillest land,
And on the strangest sea;
Yet, never in extremity,
It asked a crumb of me.
Is it too late - have we unleashed enough amplifying feedbacks to destroy any hope for the continuation of human civilization? That was more or less my question in this post, and my answer then was: Probably! So should we give up in despair?
Absolutely Not!
RPauli sent me a link that led to this article called Abandon Hope, which states (assuming I am interpreting correctly) that efforts to live sustainably cannot be based on hope for avoiding the worst consequences of climate change, because those are already inevitable - but rather, if we are not to despair, we need to develop and nourish a culture of living sustainably for its own sake...as the moral way to live, regardless of the ultimate fate of our culture.
That is similar to my own thoughts ever since I learned that catastrophic climate chaos is looming in our future, and has been for decades, if not centuries. It took 65 million years for the world to achieve, through generations of evolution, the height of biodiversity that humans have enjoyed, and exploited. Everywhere on earth throughout our history, we have driven species to extinction - and in the past century, we have polluted to the point where the ecosystem as it has existed for millennia is now irretrievable. Check out this story about the collapsing food chain in Antarctica, for just one example, and for another, evidence that pesticides used in salmon aquaculture are killing off the lobsters (sob!). Those are just two tiny anecdotes in a deluge of planet-wide disasters.
If I didn't have children, it would be much simpler to just chalk it all up to physics. We are all particles of energy - and so what if our civilization ceases to exist!
But, as a mother, I grieve and agonize over the pain my children will suffer, as will all the children who are going to inherit a hideous future of danger, violence, deprivation, and conflict, with little amelioration. It's quite a task to find any happiness, let alone hope, when contemplating such prospects. Every now and then I feel a faint remembrance of an inkling of happiness, and I'm grateful when that happens!
Those who die before the full brunt of collapse occurs can consider themselves lucky to have the luxury of a hospital with medicines and pain relief. It's going to be quite interesting to see how those witnesses that remain will react to the cataclysm. Here is a poem, via Des:
There Will Come Soft Rains by Sara Teasdale
There will come soft rains and the smell of the ground,
And swallows circling with their shimmering sound;
And frogs in the pool singing at night,
And wild plum trees in tremulous white;
Robins will wear their feathery fire,
Whistling their whims on a low fence-wire;
And not one will know of the war, not one
Will care at last when it is done.
Not one would mind, neither bird nor tree,
If mankind perished utterly;
And spring herself when she woke at dawn
Would scarcely know that we were gone.
I fear this poem, which describes the resurgence of nature after a war destroys humanity, is wildly optimistic. All signs in the scientific literature, if taken objectively, point towards surpassed tipping points and positive feedbacks that eventually will lead to runaway global heating, and it will take until the next orbital wobble towards a new ice age to revert and stabilize a climate to the point where it is habitable - if then.
Back on the narrower topic of trees, I have personally received reports of similar vegetative decline from people in California, Colorado, Oregon, Virginia, Pennsylvania, New Hampshire, Vermont, Massachusetts and Maine.
slanted tom says, in a comment at ClimateProgress.org:
February 17, 2010 at 4:03 pm
Witsend: I looked at all of your New Jersey photos and see the same sorts of damage here in NE Georgia. Where I live backs up to about 3000 acres of what was farmland before 1950 and is now woods where only deer hunters go in the fall (without vehicles). During the past 15 years I’ve noticed that what had been dense undergrowth and towering pines with many vines is now clear and open. Twenty years ago it would take a machete to hack through these place and now it’s just a casual walk. I put it off to the pine bark beetles and fungus killing the pines and deer eating the lower understory and the severe drought of a few years ago. But there’s more to it. Atmospheric mercury, ozone and other pollution seem to be the culprit. I have 3 very old large white oaks which could easily be more than 200 years old in the yard. They show the kinds of damage that you have photographed.

I hope some researchers get grants to find out why so much vegetation is dying back. I was hoping that our formerly human friendly environment could be saved by the massive planting of billions of mixed species trees. This won’t work if they can’t grow because of what our civilization has put in the air.

The significance of complex ecosystems was framed rather well in this comment at RealClimate.org, by one Tim Jones:

RE: 5 elliot says: 16 February 2010 at 11:47 PM
“Dont make cataclysmic predictions the world will not end because of AGW and life (including human life) will go on. It just might be a bit warmer and for where I live that would be a good thing!”

Elliot should try to think outside the box he lives in.

Where we own property in Central Texas I’ve lived through three summers and more of “exceptional drought,” the worst it gets, and whole summer months of temperatures over 100º and almost no rain at all. I’ve very well seen that just the beginning of a barely discernable warming trend has had cataclysmic effects, whether the drought is merely coincident or not.

By effects I mean the base of the food chain being wiped out.

Flowering plants wilt and die. Thereby insects that depend on host plants don’t survive. Thereby birds and mammals depending on seeds and insects migrate away or die off.
Hummingbirds become totally dependent on their human feeders then only to migrate on. Old oak and cedar elm trees dependent on certain levels of rainfall suddenly wilt and die. Creeks and rivers dry up so aquatic life dies out. The aquifers aren’t recharged so springs and seeps dry up and wells silt up and then go dry as well.

With the grass short and sparse and brown the cattle industry goes belly up. With no rain the corn and cotton fields wilt away if they get started at all. In the cities, as the reservoirs dry up drought stage alerts make for water rationing. The heat makes summertime electric bills skyrocket and the poor suffer even more for that.

Since the movement of the subtropical zone northward is forecast to be a consequence of global warming these tastes of drought are indicators of what’s to come, if it hasn’t already started. The whole American Southwest is subject to this, and it’s not just there.

Believe me, desertification is a serious matter. The predictions of impending catastrophe need to be made loud and clear.

That RealClimate post was about media attacking the credibility of scientists, and distorting their results, to which I commented:

I blame John Edwards. The tabloids exposed his tawdry affair, thus, junk news sources gained credibility. That, and the fact that scientists are too timid about publicizing and linking current effects of AGW.

Scientists should be on the teevee news every night with pictures of cow carcasses from the drought in Argentina, bleached coral reefs and dead sea beds, wildfires in Australia and California, collapsing ice shelves, melting ice caps with stranded walruses and penguins, shrinking glaciers and pictures of the people that need them for water, record breaking precipitation events like blizzards, droughts, and tornadoes in cities. Throw in some footage of scalped mountain tops in Appalachia.

THAT should be the news, not made-up controversies. Forget your rectitude, scientists, step up to the plate! A habitable climate for YOUR children is at stake!

To which some actual scientist replied - and I do not know whether he meant to convey exasperation towards me or towards the constraint upon scientific speech, with his sigh:

> Forget your rectitude, scientists, step up to the plate!

Gail, that works only once. Our rectitude is our only weapon. Sigh.