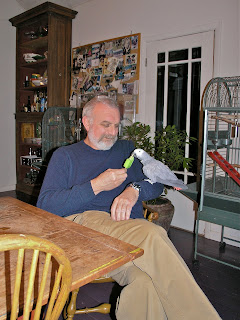 The first thing I read this morning was a summary from Colorado State University Extension, titled "Air Pollution Affects Local Trees" about the effects of ozone on vegetation. It's worth reading for the matter-of-fact descriptions of damage and symptoms, and the distinct lack of alarm. Ozone causes plants and trees to die, ho hum.
Now I have to admit I am grateful to Andy Revkin. In general I dislike him, because he has had a uniquely valuable forum at the NYTimes to address climate change, which he has squandered thanks to an unconscionable lack of passion or conviction. It is more typically my wont to describe my feelings for him thusly, (to a friend):
But in this interview at e360.yale.edu, he did a creditable job (which may have been accidental) of describing a fundamental breech between the approach of environmentalists and climate change scientists towards educating the public:

"e360: Do you think the fact that most people are really still not paying attention or are that concerned about this issue, do you think that’s a function of the media and scientists not communicating it well, or is it a function of people not really reacting to a problem or situation that seems very far off into the future?

Revkin: It’s pretty primal. Which explains why there are some advocates for action on climate who keep trying to link the here-and-now events: Australian wild fires, or the tree die-off [in North America]. If they can make the point that these changes that you’re seeing viscerally in your landscape now are the result of this thing, maybe that will be more likely to change people. But there, too, the causal linkage between a regional change and human-driven warming of the climate through the buildup of greenhouse gases is one of the hardest things to do confidently."

My comment was:
Yes, that would be me. Losing our trees is intolerable to those of us unwilling to cheerfully relegate our children to the slow suffocation of the hermetic existence you seem resigned to for them.

I would personally like to see Mr. Revkin make like a reporter and call the USDA and the Forestry Service and the USGS and get some real numbers from them.

Today everywhere I look I run into this story and feel like I'm Alice gone through the looking glass. It is about a long term study in Maryland purporting to show that - thanks to rising levels of CO2 - trees are growing faster. This is presented as though it's a good thing - you know, the old "CO2 is food for plants"!
Leaving aside the fact that the human equivalent of that theory would be that bingeing on a high calorie diet and getting fat is good for humans in the long run (uh, it's not), it completely ignores the effects of the "other" greenhouse gases - nitrous oxide, sulfur dioxide, acetaldehyde - that bathe the trees in toxic ozone and acid rain. How this study could find trees thriving in Maryland is astonishing.
So, I wrote a letter to the lead author, copied below, to find if any "trick" has been employed to "hide the decline". And the only other thing I would note is that the funding for the project is from HSBC Bank. A quick search on Yahoo for "HSBC" greenwash (which means, posturing for public relations or advertising purposes to be environmentally friendly while actually pursuing decidedly unfriendly policies) yielded 46,700 results. Just sayin'!
Here's my letter:
Posted by Gail Zawacki at 7:55 AM