Blame it on the Weather

When I checked a link to video at my earlier post about trees falling in Central Park, I found it had expired, but happily located a new one to replace it that is even better. I suppose it's going to take some time and more events like this one, a wild storm in Europe that knocked over trees and branches, which actually caused quite a few injuries and deaths, before most people detect enough of a pattern to understand that there is something more substantive going on than random bad luck with the weather. 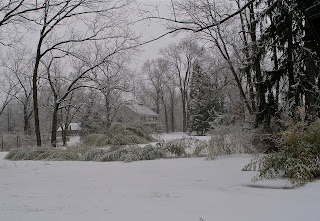 This last snow was very heavy and wet, it flattened my bamboo, which have since bounced back. 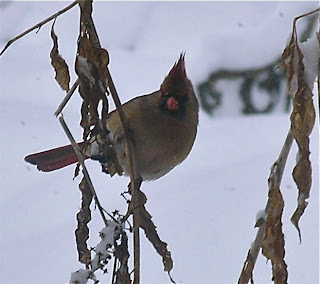 This female robin found something to nibble upon from these shriveled vines. I am so excited! I ordered a new fancy schmantzy camera, after much agonizing, having decided that since the world is going to hell in a handbasket anyway, I may as well take the best pictures of what remains that I can. 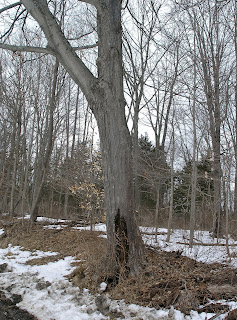 Today it was over 40 degrees F., and in the thaw many trees were losing sap from their trunks and branches. The tree in the foreground is, and there is another, further back on the right, that has the identical problem. 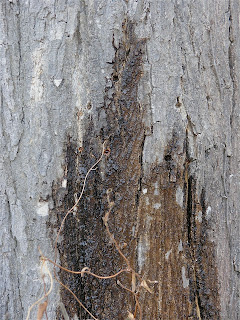 This oozing of sap must have something to do with the bark falling off. In instances where it isn't actively wet, it leaves stains on trunks where it has plainly been exiting from holes - and there are more and more holes. 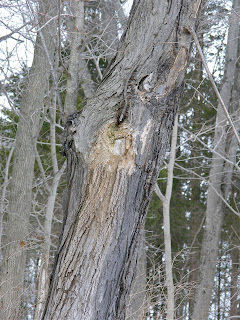 Smaller trees are just as apt to be losing their bark as larger trees. This slender trunk has a diameter of only about 6 inches and its bark is splitting and peeling. 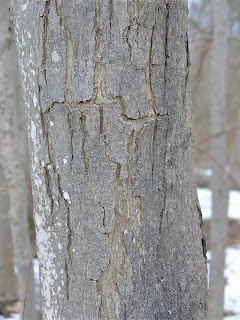 It has spots of dried sap depositions on the surface. 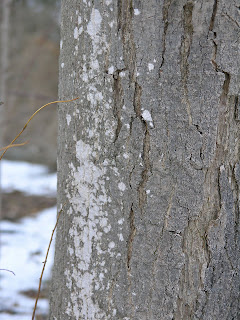 And the protective bark is peeling off high and low. This is very serious because it is becoming evident on every species of tree, of all ages - and the time between when bark begins to fall off and the tree is completely and obviously lifeless is very brief. It is as though you started bleeding through your skin, and then it fell off. Zombie alert! 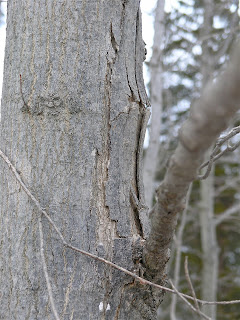 In addition, I am being amazed at how quickly trees are turning from alive to completely rotted, whether still standing or fallen on the ground. I wonder if there is something in the atmosphere that is accelerating the process of decay in addition to causing universal decline. There are old stumps around my home that had persisted in pretty much the same shape after being cut down three decades ago, but now it seems like trees disappear in a matter of a couple of years. Bizarre! 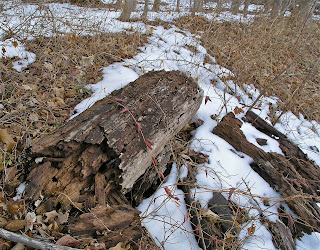 It's early for these oyster mushrooms to appear - I guess somebody forgot to give them the memo about what a cold winter it's been! It's early for these to be flourishing as well. When I get a chance, I will check on the daffodils that emerged in December. Last time I looked, in mid-January, they were still there, slightly larger. 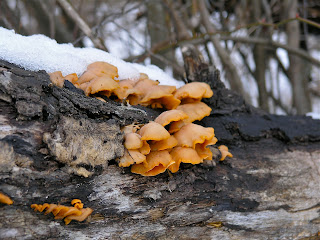 I have just noticed, (duh!) that I can create separate pages for the blog, that open with tabs. This is a bit of a project, because I would like to go back and collect all the links to scientific research and organize them separately, so if anyone is looking for that (including me!), they won't have to slog through all of my personal observations, speculations, and diary entries.
Until I figure out the process and find the time to revisit old entries though, Wit's End will remain a thoroughly disorganized "loose and baggy monster" as my college literature prof used to call certain novels.
And alas the search feature on my blog host is abysmal!
Posted by Gail Zawacki at 2:26 PM