Early yesterday morning it was blissfully peaceful. I forgot about TEOTWAWKI for a few moments when I woke and the world looked blue, and remembered instead a winter long ago, when I was 13 years old. A series of Nor'easters hit Ipswich, and there was so much snow there was nowhere to put it. 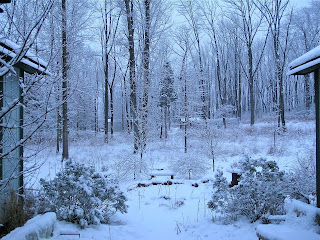 It was piled in steep mountains along the roads, and it was endlessly amusing to clamber to their peaks and leap into soft drifts. The streets were reduced to narrow footpaths through white canyons. The schools closed for over two weeks, and helicopters were dispatched to drop food to the most isolated areas of town. 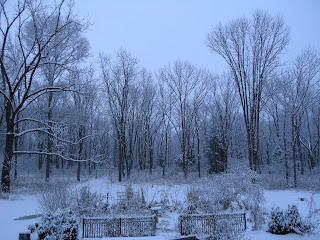 One night when the snow was coming down so thickly it was impossible to see more than a few feet, I ventured outside in the dark. It was so exciting to be alone in such a massive storm. I sat under a laden pine and just listened to the sound of the snow falling, billions of fat sparkly flakes that eliminated any other consideration. 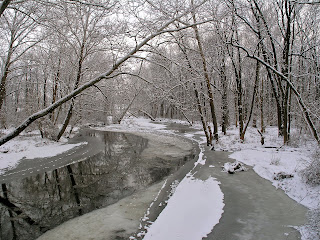 When my children were little, we would scoop up fresh snow in bowls and pour maple syrup on it, and eat it with a spoon. Now, I know the snow is brimming with invisible toxins. 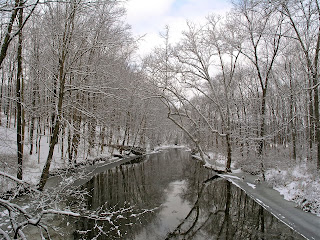 But it is still beautiful to behold. 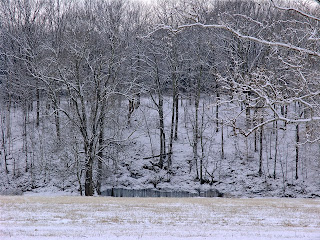 There is a cavern, on the far side of the Black River, that always is curtained by huge icicles in freezing weather. 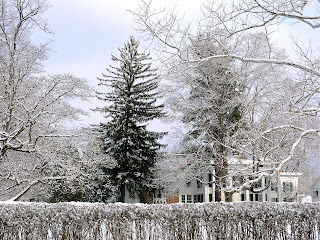 The pines at Purnell are becoming more and more spindly. 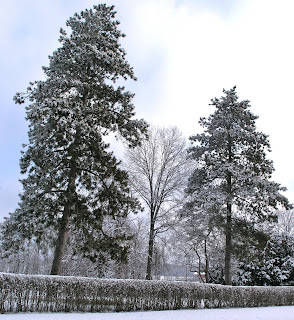 These two have what foresters refer to as "tufted" growth, from losing inner needles. 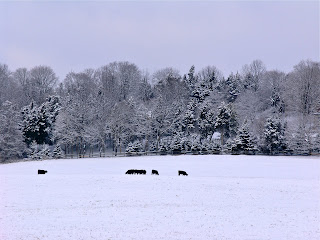 The cows were out early in the morning, snuffling aside the snow to graze. 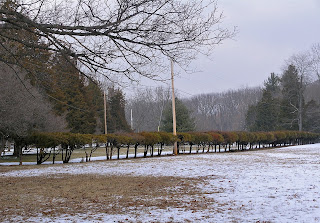 I had to go to a store in the afternoon, and took pictures along the way home. That hedge used to be solid green. 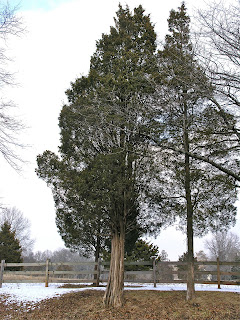 The indigenous cedars were never a particularly bright green, but the needles are now brown, and many are a funereal blackish hue. 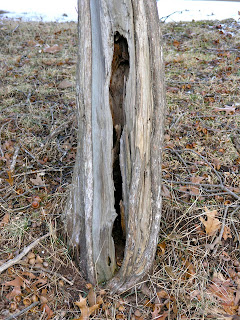 Many of the trunks are becoming hollow. I think this one looks sort of like "The Scream!"

Just as bark is falling off maples and oaks, the trunks of cedars themselves are splitting. 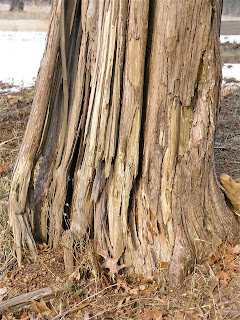 The one above is splitting from the base, and the one below is rotting fast. 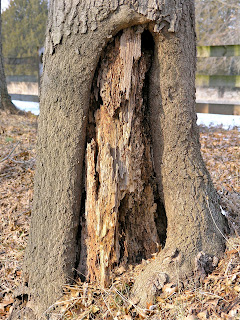 I found another magnolia that produced seeds, which I have never seen before. 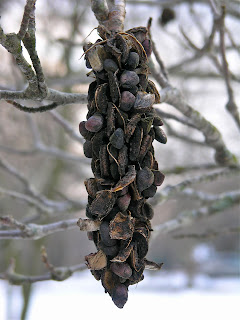 This picture conveys the typical look of untended woods. 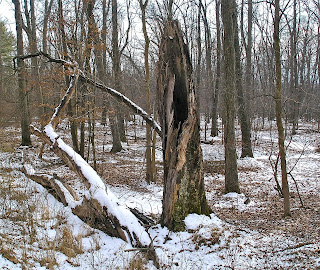 I believe that is shagbark hickory - but the pieces of bark on them are curling away from the trunk. 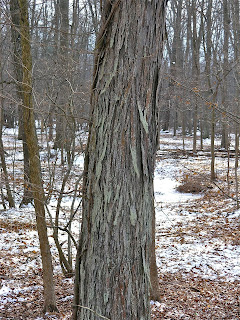 These two large cryptomeria are about 30 years old. They have gone from thick and green to this sickly sight. 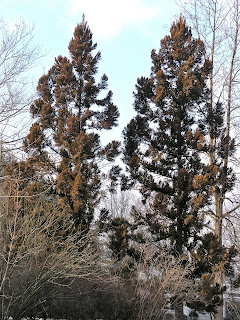 Here are the honey locusts along my street. First, the tops broke off, in the past two years. 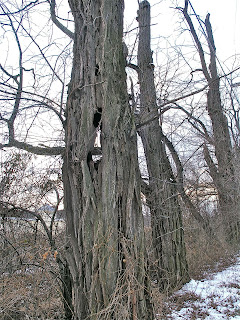 Now, the remaining trunks are splitting. 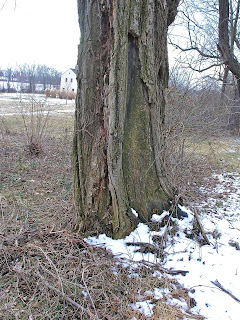 They reveal rot, and fungus. 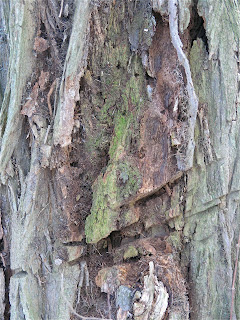 And some are so hollow, you can all the way through to the sky on the opposite side! 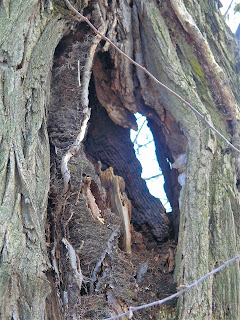 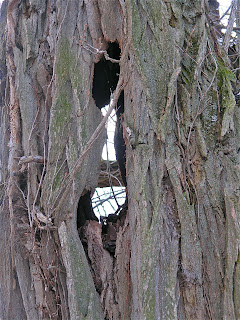 In spite of the purportedly cold weather, this forsythia bush is blooming. 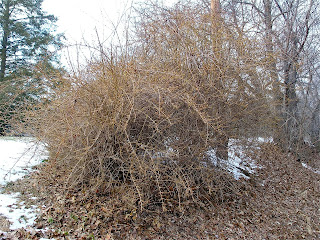 The flowers though were nipped by frost. This is a very bad trend. Already, I have seen buds swelling on fruiting trees, and magnolias. 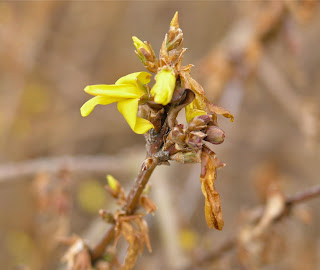 By the end of the day, most of the snow was gone. But we are expecting even more, starting tomorrow! 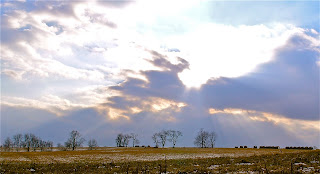 A careful read of this article in Science Daily leads inexorably to one appalling conclusion: scientific experts - let alone average people - have absolutely no idea what is going on in the atmosphere. There are so many emissions reacting to each other and to radiation that it's anarchy in the skies.
Yesterday, according to ClimateProgress President Obama said this:
"By the way, remember acid rain? That’s how that got solved, was basically what happened — the Clean Air Act slapped a price on sulfur emissions. And what ended up happening was all these companies who were saying this was going to be a jobs killer, et cetera, they figured it out. They figured it out a lot cheaper than anybody expected. And it turns out now that our trees are okay up here in New Hampshire. That’s a good thing. So we should take a lesson from the past and not be afraid of the future."
Of course I'm completely in favor of his policy to cap carbon emissions, but here was my reaction to his rosy assessment:

Sorry, Obama, the Clean Air Act was not the success greenwashing industry and government pretend it is, and the forests in New Hampshire and everywhere else are decidedly NOT healthy. Here’s an excerpt from an interview with Dr. Charles Driscoll, but any internet search about acid rain will reveal the lasting, persistent damage and the ongoing deposition from multiple sources:

"larryo: So on acid rain. It’s below the radar of the media these days. Any idea why?

cdriscoll: I sent you the Science Links report and paper we did a few years ago to try to bring it back to the public attention. I think it is because the 1990 Clean Air Act Amendments addressed the problem in part and the media and public have the perception that the problem is solved. Also other national and global environmental problems have emerged."

It’s not going to be possible to solve our emissions problems if we don’t start getting realistic about the scope of the impacts.

I might have added these links (but that would have put me into moderation purgatory): This information from Virginia contains the following ominous passage:

"Scientists knew that the 40 percent [reduction in admissions] was not going to be enough to stop acidifying streams in some places," Bulger says. "That number was never scientifically based. It was a compromise."

This is terrifying because it is exactly what all sorts of policies to address global warming propose to do - make compromises that aren't based on the science. That approach didn't work for reducing acidity in soils, streams and lakes - killing fish, vegetation, amphibians and birds - and it's not going to save humans from catastrophic climate change, either! You can't argue with Mother Nature - she doesn't care about the Senate, the Congress, the lobbyists, or even you or me.

And for anyone who really wants to wallow in the theatre of the absurd, here is a story from ten years ago in the New York Times, exemplifying just how quaint is any concern about toxic emissions.

And now, an uplifting palindrome (or semordnilap? whatever...) that has had over 10 million views on YouTube!