Last week a flock of robins descended, at least 100 of them. And they are still loitering the premises! 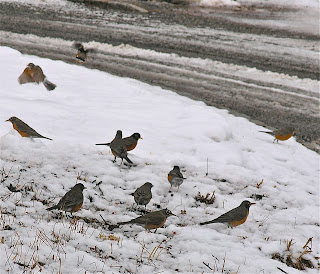 The dried fruit on the crabapple trees have been hanging, shriveled and unappreciated, all winter - so I was glad to see that the robins enjoy eating them, and to hear their singing. Is it early for robins to appear, migrating in such multitudes? I don't know - but last week I saw an opossum, and I have to wonder about that too. 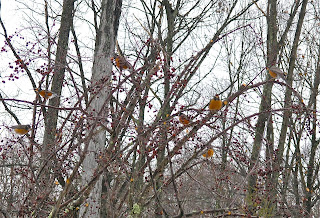 Following are a few examples of the prevailing trends that make for the inescapable conclusion that unprecedented things are occurring in our tree population. I'm not sure why exactly, but I do know, none of this is normal, or beneficial. First - bark is frayed, splitting, and falling from trunks and branches. 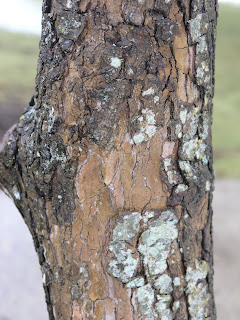 This happens to be a dogwood - but you can find the same thing on every species. It's unbelievable how fast this trend is visible, among trees young and old and in between. 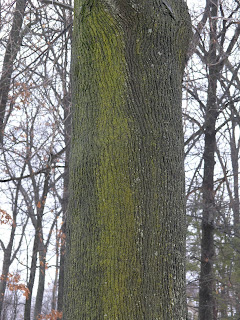 Nasty opportunistic fungi and molds and lichens are proliferating at an astounding pace. 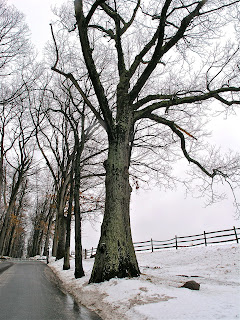 Huge old trees like this have been swamped with lichen. 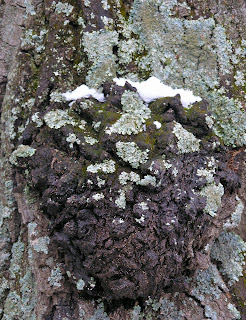 Many are sprouting cankers, which are one of other indices of lethal fungus. 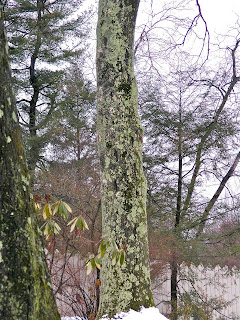 It just cannot be healthy for a tree to be inundated with a growth like this. 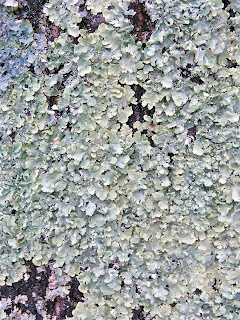 It's to the point where hardly any bark is left that isn't garbed in another alien organism. 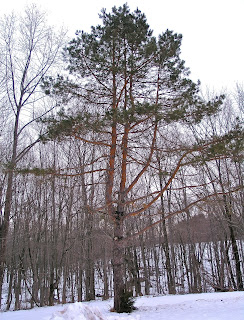 Every sort of conifer is either totally bare of needles, or thin. 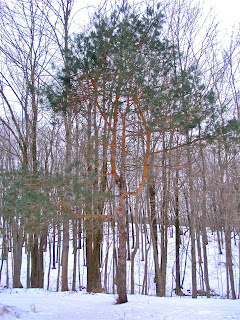 This makes for a very changed landscape, where the view into a mixed wood is wide open, through pines that until this year were solid walls of greenery. 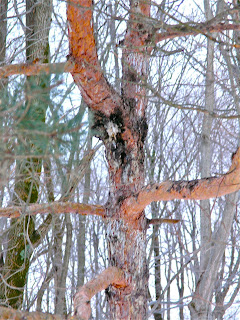 The interiors are a palette of extreme hues of red (lost bark), black (fungus), and white (oozing sap.) 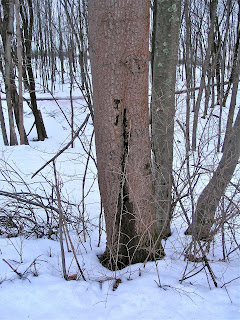 Here is yet another new, and not yet identified, bizarre pigment appearing on trunks and branches. 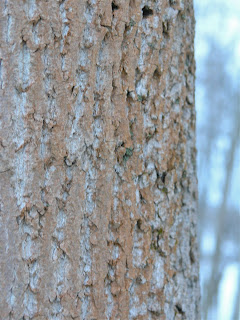 It is a strange red hue. Here is a closeup of a rampant calamity - splitting and seeping, bleeding sap. 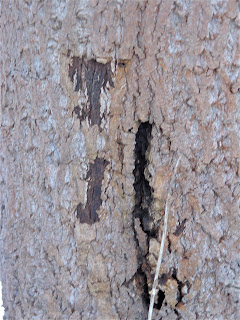 The woman who planted this Alaska Cypress is quite a devoted gardener. Last fall, it was a cascade of lush green. You couldn't see through it to the wall of the building. It's a very special and unusual specimen. 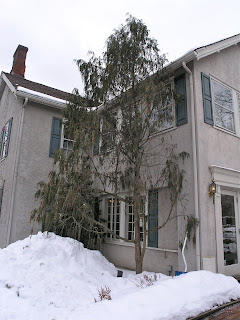 I was curious about the species, so I asked her what variety of conifer it is. 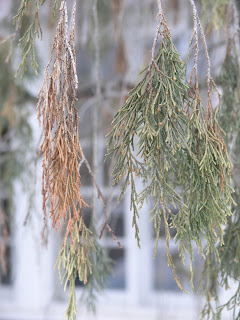 Then to be polite and respectful, even though it's obviously on death's doorstep, I blurted out something awkwardly dumb like, well, it's just lovely! To which she replied, with a pained and stricken expression, "Thank You!"
Here are the two poems promised in the title of this post:
A Song of Enchantment
A song of Enchantment I sang me there,
In a green green wood, by waters fair,
Just as the words came up to me
I sang it under the wild wood tree.
Widdershins turned I, singing it low,
Watching the wild birds come and go;
No cloud in the deep dark blue to be seen
Under the thick-thatched branches green.
Twilight came: silence came:
The planet of Evening's silver flame;
By darkening paths I wandered through
Thickets trembling with drops of dew.
But the music is lost and the words are gone
Of the song I sang as I sat alone
Ages and ages have fallen on me -
On the wood and the pool and the elder tree.
Autumn
There is wind where the rose was;
Cold rain where sweet grass was;
And clouds like sheep
Stream o'er the steep
Grey skies where the lark was.
Nought gold where your hair was;
Nought warm where your hand was;
But fantom, forlorn,
Beneath the thorn,
Your ghost where your face was.
Sad winds where your voice was;
Tears, tears where my heart was;
And ever with me,
Child, ever with me,
Silence where hope was.
Posted by Gail Zawacki at 6:01 PM