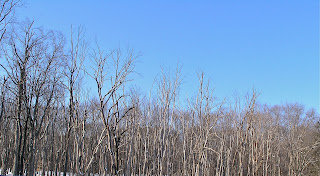 The NYTimes has an article about potential federal action to protect coral reefs using the Endangered Species Act, stating they "could be wiped out by midcentury if the government does not take steps to protect them from warming waters, rising ocean acidity and pollution." Well, this picture taken today (JFK Parkway between Short Hills and Livingston) is the terrestrial equivalent of coral bleaching. Click on it to see, every single one of those trees is dead. They look ghostly white because they are smooth and bleached - all their bark is gone.
Following is my comment on ClimateProgress.org, which linked to the story about coral bleaching:
It is so pathetic that people could save so much energy by making trivial adjustments to their behavior. One of the problems is that energy is artificially cheap, and doesn’t take into account costs like – cancer treatment. Another is that for people to make even the slightest attempt to conserve – like not, say, leaving their car running while they stop at the post office – would require an admission that one or more of the following are true:

Most people are (rightly) terrified of each and every one of those facts and so, rather than face up to reality, they squander fuel in defiance of any logic.

But I really wanted to post a comment about the coral reefs. It is high time somebody made the same case for trees, which are equally at risk of extinction from greenhouse gases.

That, however, goes back to the digression above. Trees are too close to home – what could be more American than apples? Exotic fish and corals are distant enough, we can contemplate their loss. But trees?

I am reposting this picture, one of my favorites, in honor of coral reefs.