It's wonderful to see that ever more people are waking up to the dangers of pollution, and taking personal risks to stop it that would have seemed outlandish just a year ago - such as this gallant grandma in Oklahoma, who used a bikelock around her neck earlier today to halt excavation for the Keystone XL pipeline.  But while the article on the Great Plains Tar Sands Resistance website talks about the health effects in neighborhoods in the path of pipelines, from spills and emissions and chemicals, not once does it mention climate change - let alone the global trend of forest dieback from rising levels of tropospheric ozone pollution (oh but hey Ozonists are used to that, heh).  I love the way she brought a pillow to sit on! 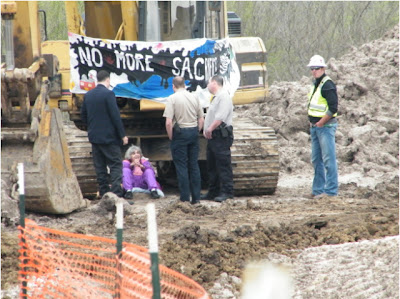 Back in July, after writing an article for Grist about an action to shut down a mountaintop removal mine site in West Virginia, I earned the opprobrium of parties on every side, in part for articulating a schism that most prefer to sweep under the rug.  Apparently I wasn't supposed to delineate the uneasy alliance between outsiders with a broader climate agenda, and many of the Appalachian residents.  Most of the latter are up in arms because of habitat destruction and toxic contamination from the extractive processes that cause cancer and other diseases.  It was evident however that many of them have no objection to the emissions of burning coal, and no quibble with indulgences that are part of an industrial consumer society.  It's evidently okay with them when somebody somewhere ELSE is losing their clean land, water, and air.

After years of shunning any association with hippy "environmental" issues, the big, serious, sciency climate activist organizations are being eclipsed by the suddenly galvanized, genuinely grassroots groups who are rising up to fight the onslaught of corporate Goliaths.  In rejecting ecology for so long, the climate movement has relinquished the narrative and the result is that these burgeoning groups, newly formed particularly as the fracking menace spreads nationwide, are often oblivious or indifferent to the larger issues of climate chaos and ecosystem collapse (which happen to be rather more crucial to the survival of the biosphere, including us).

Does it matter?  Maybe through the process of engagement over local pollution issues, the participants will become educated about the truly existential threats that cross international borders.  It's likely that arrests and corporate control of spill sites will lead some to become radicalized about government and law enforcement and media collusion...but whether they will become enlightened about what my friend Steve Horn describes in TruthOut as "green illusions" is not so clear, since so far the promoters of "green solutions", if the hostile comments there are any indication, still haven't figured it out.

This video makes me laugh out loud every time I watch it...see if you can figure out why.  (hint: it starts at 1:50 minutes in, and the dialogue only gets funnier after that.) 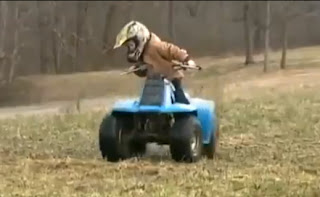