It can truly be said:  Men are the devils of the earth, and the animals are its tormented souls. 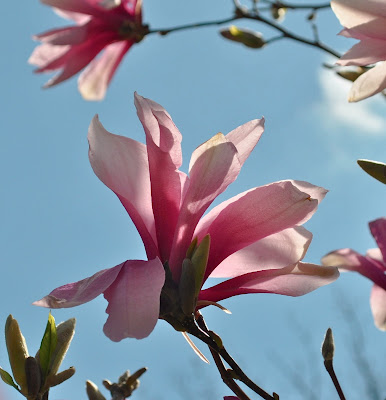 Spring is really here, and the rain obligingly watered my garden last night.  Thank you, rain! 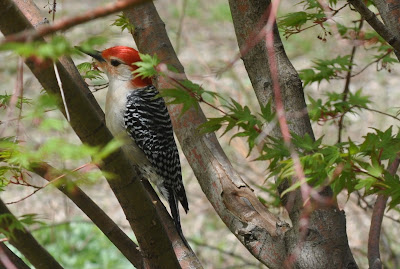 New birds are thronging around the feeder in the Japanese maple, whose pale delicate leaves are unfurling. 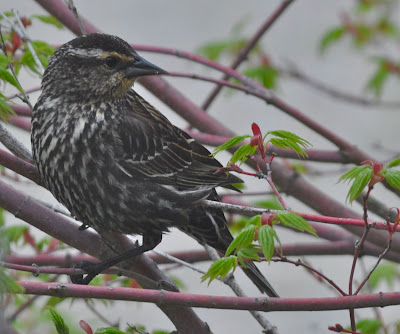 How could a day with so many signs of life, a fragrant breeze, an azure sky, demand a quote as bleak as Schopenhauer's? 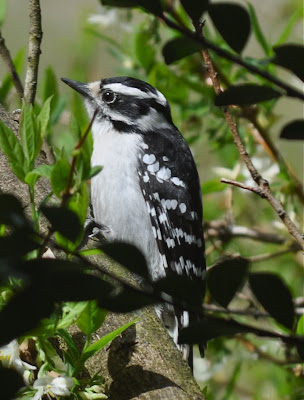 The forsythia along the paddock fence is brilliantly golden. 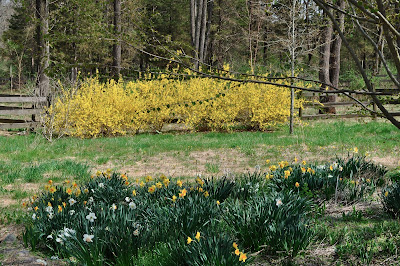 The quince is just opening its buds, with a promise of hard, round fruit in the fall, excellent poached in vanilla syrup for an apple tarte tatin. 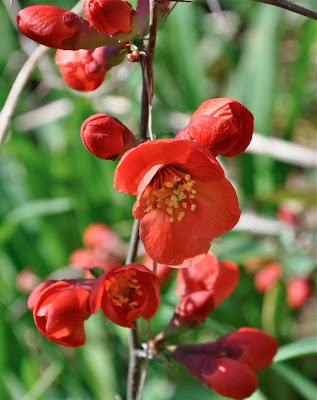 This vinca has a particularly pleasing shade of violet...what could possibly mar April's exaltation? 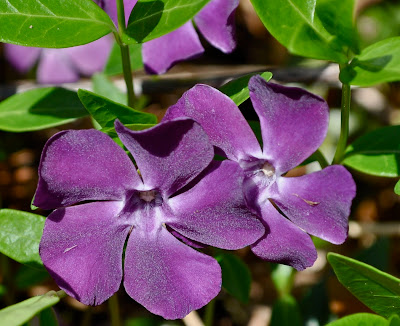 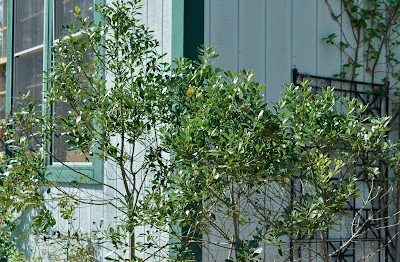 It can be readily detected, however, on the evergreen plants.  The older leaves have been damaged from absorbing pollution, and have fallen off, leaving shrubs that should be a solid, impenetrable lush green with only an upper shell of foliage.  When you look at the leaves directly, the classic speckled symptom of injured stomata is visible on what leaves remain. 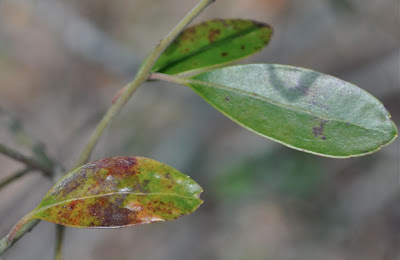 In a matter of days, the inner leaves of the holly by the barn dropped to the ground. 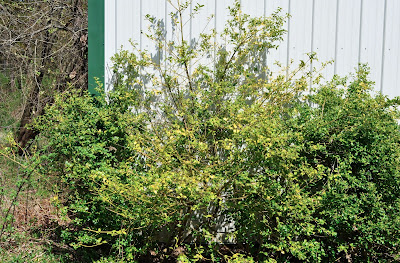 It is making fantastic clusters of buds, in a frantic effort to reproduce before it expires altogether. 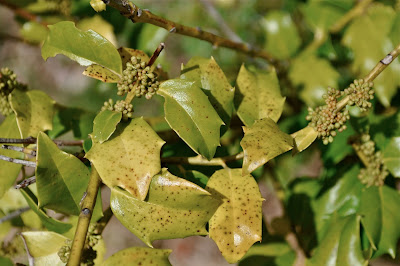 In typical fashion the newest leaves at the tip of the branch, on the left, are in better condition, and they look progressively worse as you move to the older ones on the right. 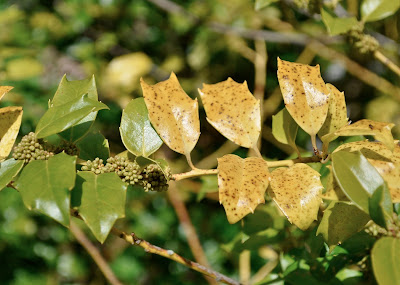 Earlier this week, a link to a fascinating blogpost at Jungle Diary was contributed in comments, which anyone who is interested in trees should make a point of visiting.  Titled "Are the Trees Dying", the author was not familiar with ozone or its effects on vegetation, but he shares my dismay that so few people notice the increasing incidence of premature tree mortality - even in Malaysia where he lives - and writes me that:

I think the haze may have something to do with this, as the haze comes from open burning, and this is releasing a lot of methane and CO2 into the atmosphere, as well. With haze being an annual affair, it's definitely having an effect on the well-being of the forest.

And then, I read a post at Desdemona Despair that has rendered me so incredulous and sickened that I left the following comment:

Humans should be exterminated.  Eating monkey brains while they are alive?  Of all the many horrible things I have ever heard of people doing, to each other or to animals, this has to be the most macabre, closely followed by the bear paw soup.  Any species capable of producing members capable of this DESERVES its extinction.  It can't come soon enough.

The article is about a woman, Rebecca Tillbrook, who is trying to stop trafficking in endangered wildlife.  It begins:


Would you purchase an endangered tiger's tooth as a cure for acne?

Perhaps not, but in many Asian countries, you could.

The fact that the animal may be critically endangered can actually make the purchase more lucrative, as the rarer the animal, the more potent it's good fortune and healing properties.

Like the drug trade, wildlife trafficking is big business.

It continues with the part that left me so revolted:

When Ms Tilbrook first arrived in Cambodia more than a decade ago she was confronted with wild animals being tortured and sold on every street corner.  She says the practices have since moved underground, behind closed doors.

Bears are kept alive in restaurants waiting for customers to order bear paw soup, a delicacy at $300 a bowl. Chefs cut off each paw one at a time, leaving the animal alive, slowly bleeding to death, to ensure the meat remains fresh for the next order.

Other bears are sent to bile farms in China or Vietnam where they live in "crush cages" designed to squeeze every last drop of bile from their pancreas out through the needle of an old catheter, until they stop producing it and die.

Macaque monkeys are yet another culinary delicacy, served either screaming or drugged, strapped beneath the table with a hole for their head to poke through.

Their skull is then removed and their brains eaten alive.

The popular belief is that meat is the healthiest when the animal is alive, and that the more fear an animal experiences at death, the tastier its flesh becomes.

Almost every part of the endangered Asian Tiger can be used and are sold for a hefty fee, including the penis which is brewed as a tea to cure impotence.

After that sinks in, note what else she observes:

"My foundation For the Animals was a reaction to the waste and misuse of a lot of funds that I've [experienced] working in the conservation world for over 15 years," she said.

"Funds are being wasted on overheads like pedantic research, huge salaries, plush offices, business class travel, lavish parties; and things that I feel feed the ego instead of accomplishing the mission that's at hand."

There is much more about the work she is doing in the video below.  Donations can be directed to the Wildlife Alliance through the Australian based foundation For the Animals.

Closer to home, her critique of traditional conservation groups is echoed in this indictment of Sierra Club policies, written by Dr. Glen Barry.  The article is so revealing of what underpins the epic failure of climate and environmental activism, that I'll include only one paragraph here and let you peruse it in its entirety at Dr. Barry's site:


"Sierra Club doesn't really speak out much about protecting remaining large and connected old-growth globally, or working to end markets for FSC and other primary forest timbers. Sierra Club under Mr. Brune continues to support FSC on its web site and in public statements, without mentioning the majority of its products come from old-growth. And Sierra Club - and even 350.org - remain silent on the at least 18% of carbon emissions coming from old-growth forest logging, even as they take an important - yet at this time largely symbolic - stand on tar sands' 1% of global emissions."