Special for Earth Day, the film "Thin Ice" is free to watch online, so it's embedded below for however long it remains available (I think, through tomorrow, April 22) so watch it while you can!  It is comprised of interviews with climate scientists about their work. 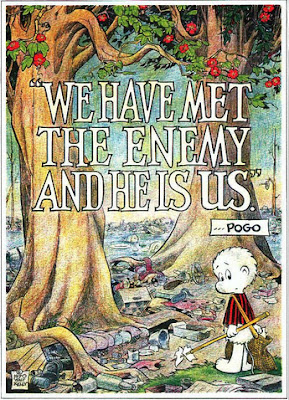 The New Yorker published an article discussing the history of Earth Day, the beginning of which follows:


"On September 20, 1969, Gaylord Nelson, a Democratic senator from Wisconsin, gave a lightly publicized speech in Seattle in which he remarked, “I am convinced that the same concern the youth of this nation took in changing this nation’s priorities on the war in Vietnam and on civil rights can be shown for the problem of the environment. That is why I plan to see to it that a national teach-in is held.” Nelson had been pushing environmental issues for some years, initially worried that water pollution was hurting fishing, canoeing, and other forms of outdoor recreation in his state. In 1963, as a freshman senator, he persuaded President John F. Kennedy to stage a national “conservation tour” to talk about the issue. Kennedy visited eleven states in five days, just two months before his assassination, but the trip was a bust: anemic crowds, little attention, and not much obvious passion from Kennedy himself."

"But Nelson’s idea of a national teach-in took off, to an extent that surprised even him. On April 22, 1970, only seven months after his speech in Seattle, the teach-in, dubbed Earth Day, generated more than twelve thousand events across the country, many of them in high schools and colleges, with more than thirty-five thousand speakers. “Today” devoted ten hours of airtime to it. Congress took the day off, and two-thirds of its members spoke at Earth Day events. In all, millions of people participated. This activity was largely uncoördinated. Earth Day had a tiny national staff—a handful of young activists—and there were no big environmental groups around to get behind it. The staff imposed minimal central direction over the local activity, and chose not to put on a main event, like a march on Washington."

"Earth Day had consequences: it led to the Clean Air Act of 1970, the Clean Water Act of 1972, and the Endangered Species Act of 1973, and to the creation, just eight months after the event, of the Environmental Protection Agency. Throughout the nineteen-seventies, mostly during the Republican Administrations of Richard Nixon and Gerald Ford, Congress passed one environmental bill after another, establishing national controls on air and water pollution. And most of the familiar big green groups are, in their current form, offspring of Earth Day. Dozens of colleges and universities instituted environmental-studies programs, and even many small newspapers created full-time environmental beats."

"Then, forty years after Earth Day, in the summer of 2010, the environmental movement suffered a humiliating defeat as unexpected as the success of Earth Day had been. The Senate Majority Leader, Harry Reid, announced that he would not bring to a vote a bill meant to address the greatest environmental problem of our time—global warming. The movement had poured years of effort into the bill, which involved a complicated system for limiting carbon emissions. Now it was dead, and there has been no significant environmental legislation since. Indeed, one could argue that there has been no major environmental legislation since 1990, when President George H. W. Bush signed a bill aimed at reducing acid rain. Today’s environmental movement is vastly bigger, richer, and better connected than it was in 1970. It’s also vastly less successful. What went wrong?"

You can read the rest for various notions of what went wrong, but I can tell you what I think went wrong:  The only reason environmental legislation was enacted was because the economic cost wasn't yet widely appreciated, and the corporations had yet to assemble opposition.  Soon after, as the incompatibility of endless growth disguised as progress, and clean air and water became apparent, an entire industry was born, of consultants and lawyers and lobbyists, to water down regulations, bribe and corrupt the new agencies and stack them with corporate moles, to infiltrate grassroots environmental organizations and corrupt them by swelling their coffers with corporate foundation money.  Manufacturing was outsourced along with the pollution.  Science became so specialized that ecology was disdained in academia...and then climate eclipsed conservation and concerns about pollution almost completely.

I remember the first Earth Day.  I was fifteen years old, and my family's (non-religious) Unitarian Universalist fellowship had a gathering in the Ipswich Town Hall, an old colonial building with wide-board floors and big mullioned windows with wavy glass.  My contribution was a big cake in the shape of a round ball, which I made by putting together two normal circular layers with round top and bottom baked in mixing bowls.  I made blue and green icing and piped the continents onto the oceans.  As I recall (and I could be very wrong) it looked spectacularly beautiful and tasted delicious.
What is the carbon footprint of freezing and then hauling four tons of ice to Manhattan?  I don't understand why an ice sculpture in New York was a necessary symbol after the embarrassing withdrawal and subsequent apology following a similarly misguided plan by 350 to have an ice sculpture spelling out HOAX melting in Washington.  This stunt was scheduled during the life-threatening heatwave in West Virginia when people there had no power and no water, let alone ice.  WTF did they forget?  It was just last summer!  Was it just an idea someone thought was so clever they were waiting for a less obviously discordant opportunity?  Don't they carve those things with chain saws?? 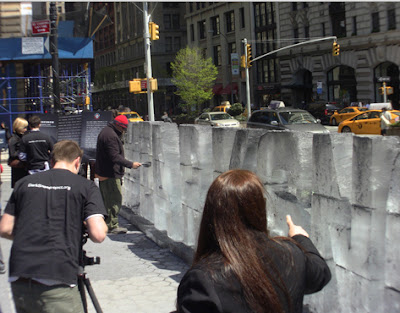 In response to the news that climate activists will be going to Greenland to publicize the melting ice, I wrote the following comments:


When are climate activists going to stop flying in airplanes?  Air flight is not sustainable even if you want to subscribe to the fantasy that it's possible to power industrial civilization for 7 billion people with so-called clean, renewable energy.  It's not just the fuel, of course.  It's all the pollution, and the other non-renewable resources that are finite.

The larger question is when are climate activists going to stop pretending that it's the big bad fossil fuel companies that are to blame when the real problem is the culture that trains people to be consumers of their products?

When are climate activists going to admit that in order for any life to survive on Earth, humanity is going to have to drastically reduce our population and curtail our so-called standard of living (or else Mother Nature is going to do it for us)?

The emphasis on blaming fossil fuel corporations is about as productive as the epic failure of the war on drugs - like blaming heroin for drug addiction.  It's the addicts that need to be reformed.

Until activists walk the walk instead of just talking the talk, they are merely providing fodder for deniers who scream "Al Gore is Fat" - Like this idiot!

In response to a comment at Nature Bats Last I added this:

I think people consume, period.  It's what we do, what we have always done, long before corporations, which happen to be especially efficient at addicting people to consumption on an unprecedented scale.  Now, we're in a culture that teaches us to consume the products of fossil fuels, which are very expensive in terms of pollution, and enable us to extract far more from the natural world than we would without them, not to mention alter the climate with catastrophic results.

We're simply doing on a global stage what we have done, over and over, in more isolated locations, long before capitalism or even agriculture.  This was my follow-up to the first comment:

There is nothing in my comment that precludes going after fossil fuel companies.  I personally go after them as often as I can.  The point I was making is that focusing EXCLUSIVELY on fossil fuel companies and their activities - mining, fracking, keystone xl - which is the main strategy of the major climate activists, is only part of the problem...half of the math, if you will.  [This 350 production is so adulatory, it's painful to watch.]

I also carefully used the word "activists" and not "scientists".  I fully respect climate scientists and their work which obviously cannot be conducted with the same constraints.  You cannot make an omelet without breaking some eggs.  (I'm very fond of poultry analogies.)

What I'm fed up with is the cocktail-party-circuit celebrity activists who not only refuse to discuss overpopulation and overconsumption and social justice and ecology, but are undermining the credibility of the science that says we must radically reduce the human impact on nature by making not even the simple concession of, say, not flying.

So the problem isn't that I (as if I were anyone important) don't want to blame fossil fuel corporations, the problem is that THEY don't want to blame US (remember Pogo?).  Not only do the major "green" groups avoid any criticism of consumption and population (not to mention eating meat, lord forbid Americans be asked to forgo hamburger), but they also won't challenge the entire oligarchy that controls militarism, one of the biggest contributors to greenhouse gases on the planet.  Instead you see them cheering because the Navy is experimenting with biofuels, as if that were a solution.

Next thing you know, Benjamin the Donkey added this wonderful limerick, thanks BTD!!!

Whom should we blame? The plot thickens,
While running around headless quickens;
Since we’ve overproduced,
Effects come home to roost:
There’s nobody here but us chickens.