Tim DeChristopher, free after 21 months, appeared on Democracy Now! for Earth Day. Compared to when I saw his fiery speech at Wesleyan University, before his incarceration, he appeared subdued and somber.  Anyone who still harbors fantasies that our president will do anything about climate change (meaning challenge the corporate despots who run the country) needs to ponder the persecution - yes, persecution not prosecution - of Bidder 70 under the Obama administration. 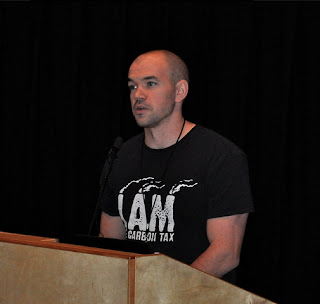 Get Active, was Tim's message.  Interestingly, when asked about the current climate movement, he responded that it's in much better shape but didn't mention 350.org:   "...we have a serious movement that's not impeded nearly as much by the big green groups that are in the Washington bubble which was our problem in 2009.  I've been relatively isolated for the past couple of years and a lot has happened during that time. The Occupy movement didn't exist when I got locked up - the biggest social movement in this country in my lifetime happened when I was behind bars and I only saw it on tv."

Well Tim, your spirit and sacrifice inspired many who took risks to Occupy.  You really deserve that overused (especially in the American media) title of hero.