...a deceiver will never lack victims for his deceptions. ~ Niccolo Machiavelli

“You can't convince a believer of anything; for their belief is not based on evidence, it's based on a deep seated need to believe”. 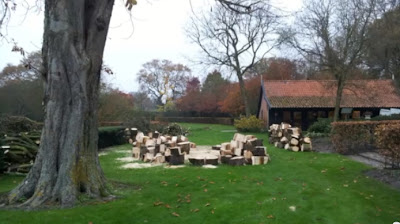 You can call it religion.  You can call it ideology.  Either way, you will never be able to dissuade someone who needs to believe in constructs that define the core of their place in the world - whether that people are inherently good, or at least, make social progress...or that there is meaning to life, or some sort of spiritual anything...or that humans are too puny to change the climate, or destroy most - if not all - of life on earth.


Put another way, as I received in an email this morning:

Homer Simpson says, it takes at least two to lie.  One to speak the lie and the others to believe it. 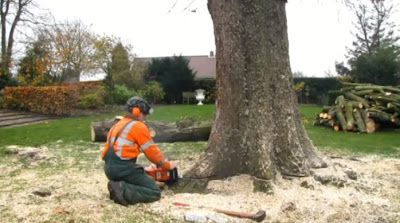 Of course, it helps to understand how effective the lie can be in controlling the believers when deftly executed, if you consider Karl Rove's three rules [thanks to a poet for those pearls of Rovian wisdom], who clearly understood Machiavellian ruthlessness based on a determination of two crucial concepts, that human nature is 1.  immutable; and 2. driven by passions.  I'm sure he didn't invent these precepts, although he articulated them succinctly for our modern times of entrenched corporate media:

1) Attack your opponent’s strength from your weakness.
2) Accuse your opponent of doing what you’re doing.
3) Be worse than anyone can believe.

The effectiveness of those rules depends entirely on the other part of Homer's dictum - those who willingly believe the lie.

Cognitive dissonance arises when perceived reality is not in alignment with expectations.  This anxiety is provoked when people like me, who know, for example, that we are headed towards severe food shortages due to a variety of inexorable trends, go to a gourmet supermarket and find a surfeit of luxury food imported from around the world. 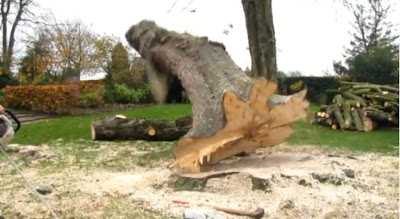 Cognitive dissonance also describes a mental/emotional response that arises when objective facts contradict deeply cherished belief systems that were formed early in life by the dominant culture.  Pain and fear arise when the fundamental basis of a world paradigm is challenged by reality, and a common - perhaps inherent - response is to reject the evidence, indeed to refuse to even look at it carefully, and go into denial or even hostility.

This is the explanation for why otherwise educated people deny and often ridicule the numerous examples of government false flag operations...because it undermines their confidence in justice and decency, security and predictability - as well as their own significance and status as a member of society with influence.  It's the explanation for why ignorant people deny climate change and, for the most part, cannot be influenced by any amount of evidence, even to the extent of distrusting scientists. 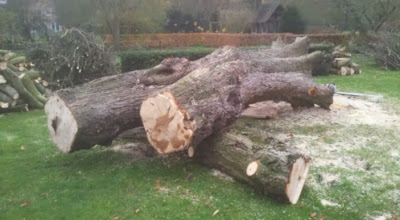 I think it shows how remarkably clever all people are that without needing to follow through for even a few moments the implications of trees dying from ozone, the blinkers are activated instantaneously.  We must have tremendous unconscious foresight to understand, in a viscerally intuitive if not instinctive response, that the death of forests heralds a death knell for humanity, because only the most miniscule number of people acknowledge the accelerating trend that is patently obvious.

So if it's hopeless to change the minds of true believers, the question is, why do so many people waste time refuting and quibbling with their inanities - and why do I waste time writing this blog?  Is it possible to reach SOME people?  Will it be possible to reach ENOUGH people in time to avert a major extinction event?

I think I know that the answers are Hope, Maybe, and No. 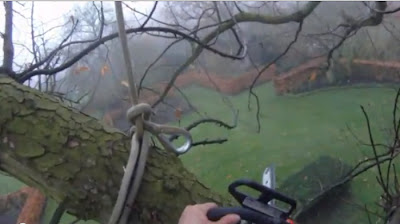 You'd think that nobody but an Ozonista like me would want to watch a half-hour movie of a dying chestnut being cut down in the Netherlands, with up-close views of fungus and lichen.  The only thing more amazing than how much tree workers love to film the dismemberment of especially large old specimens with cameras attached to their helmets, is how many thousands of views their videos receive.  I posted screen captures of this one because of the description (copied below), which is poorly translated but evocative nevertheless...particularly because it says that after removing and examining a core of the rings, the growth has been stunted for twenty-five years.  Hide the decline** anyone?

**“As for 'hide the decline,' Jones wasn’t referring to declines in temperature; he was referring to a drop seen in certain types of tree-ring data after 1960. And he wasn’t referring to Mann’s work—but to that of another scientist, Keith Briffa of the University of East Anglia. Pre-1960, Briffa’s tree-ring density records track the temperature records. Post-1960, there is a decline in the response of certain trees to temperature (possibly due to pollution): the actual recorded temperatures are consistently higher than what the tree-ring data would predict. The temperature records are the more important and reliable data, so Briffa had to discard the tree-ring “decline” records. But the decline wasn’t hidden. It was clearly discussed and labeled in Briffa’s paper. And Mann’s paper didn’t rely on any of those data.”


“The shade of the big horse behind the house in the garden of Blankenburg in Rockanje, during previous cutting operations in recent years have shown that the tree continues to decline in vitality and there was large-scale dieback of the upper peaks in the Crown.

The tree was also severely affected by chestnut which he further weakened and other wood decay fungi more grip on the tree were Kandelaberen would be a temporary solution might have been, but it was the tree anyway eventually after some years died since at 4 years old pruning wounds, no recovery was more ..

Over 10 years ago, the trees are already inspected by a qualified tree consultant and there could be seen that they are approximately 8 to 12 years could remain without danger to the environment will cause.

After counting the annual rings showed that this monumental white horse 128 years has become (census was subsequently performed on a shaved strip wood from the rootstock where both the bark and the heart is still in it), the last 25 years only 5 cm diameter growth occurred.”
Posted by Gail Zawacki at 12:19 PM