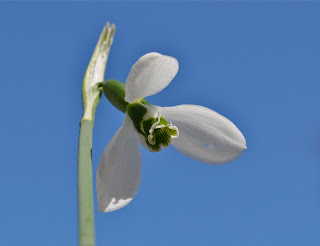 The snowdrops have been blooming for several days, hastened by the almost complete lack of anything resembling winter.  By happenstance I came across an article I recall having read a couple of years ago, which was published in 2006.  I can't remember if I linked to it earlier or not, but its description of the effects of air pollution on trees is so candid and simple, it surprised me all over again.  More than anything, I was surprised all over again to think that not one of the 33,000 employees - which includes 550 scientists with several hundred research assistants and support staff at 67 sites - of the US Forest Service are saying anything to the public with comparable urgency about the terrifying dimensions of this ongoing catastrophe. 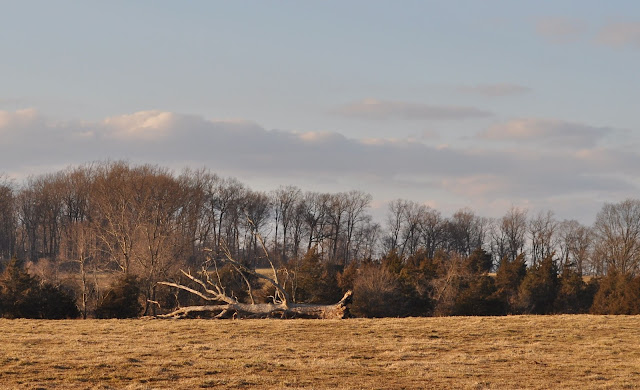 As an aside, even the lame E-HOW internet site answers the question, "What is killing my trees from the top down" this way:  "There are many reasons why trees die from the top down. Problems, including air pollution and drought, can attack a tree, regardless of its species....Pollution from acid rain, ozone and herbicides kills trees in a number of ways.  Ozone interferes with a tree's ability to perform photosynthesis. Acid rain contains pollutants, such as sulfur dioxide and nitrogen oxide, that combine with sunlight or water to form acids that leach valuable minerals out of the soil. Too much herbicide can kill plants. Trees affected by air pollution usually die from the top down. Symptoms include thinning foliage and dieback of branches. Eventually, the tree breaks off or blows over, but the dying process can take 10 years or more."  Duh! 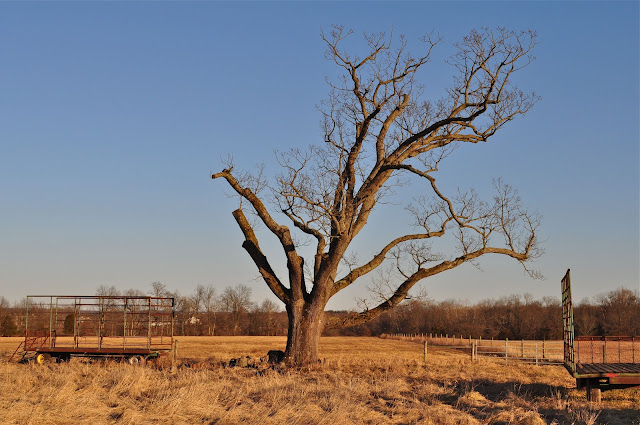 But getting back to the article about Bangladesh, the assessment was written by Md. Asadullah Khan, who is described as a "former teacher of physics" and now a columnist for The Daily Star, the major English newspaper from Dhaka.  I'm going to intersperse excerpts from his review with pictures from New Hampshire woods, sent to me by my friend Susan Shamel of the Global Warming Education Network (GWEN.org): 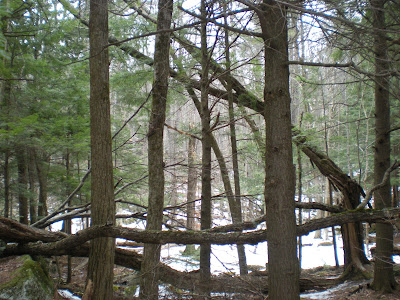 "Unsurprisingly, in Bangladesh trees are being felled for fuel in the households and brick fields and also to meet the growing need of croplands for feeding the burgeoning population. But other than this type of extinction, there is another deadly culprit at work that is slowly denuding the forests of the Sunderbans, Cox's Bazar, Sylhet and in northern parts of Bangladesh much beyond our knowledge." 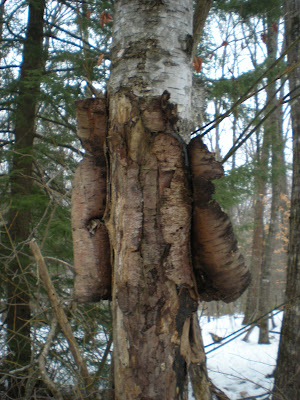 "The disease called 'the dying forest syndrome' which in the Sunderbans is known as 'top dying disease' strikes selectively but with deadly effect. The onset of the disease starts with the dark green branches hanging limply. Between five weeks and three years later, the branches are tinged yellow and then brown. The weakened tree soon drops its needles and eventually stops growing new ones. It becomes leafless at the top and appears stunted. Finally drought, insects, and parasites finish off the weakened plant." 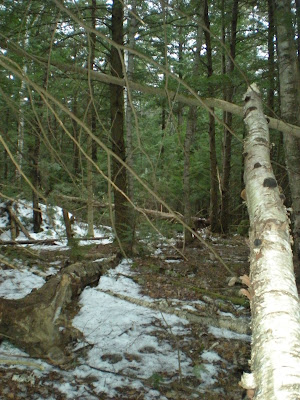 "In parts of Africa, Europe and most notably in the Sunderbans in Bangladesh, the dying forest syndrome causing death of trees has come up as a big environmental disaster. The epidemic of dying trees which has struck the forest resources of the world appears to be quite mysterious. But the most convincing evidence points to air pollution, specially sulfur dioxide and oxides of nitrogen spewed in the air by the ton from electrical generating stations, industrial boilers, smelting plants and automobiles located thousands of miles away." "One school of thought points out, by itself sulfur dioxide can sap the vitality of the tree; so can oxides of nitrogen. But the real problem seems to begin when two gases work in combination in the atmosphere. Hurled into the air by tall smokestacks, the substances mix with water vapour to form sulfuric acid and nitric acid known as acid rain and in the presence of sunlight turn into oxidants such as ozone. When these new chemical mixtures fall to earth as snow or rain or float into forests as wind or fog, they can be far more lethal than the ingredients that went into them." 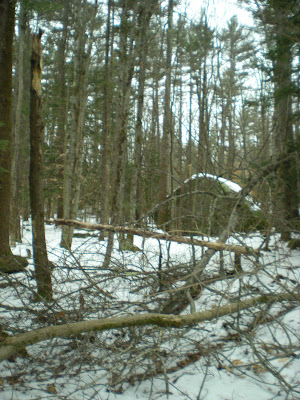 "Acid rain, in the form of dry particles, snow and fog, attacks a tree on all fronts. Airborne pollution settles first on the highest treetops of the forest crown, which acts as a natural windbreak. Acid precipitation filters down to the soil, eats away at the root system and eventually leaches out key nutrients such as calcium and potassium and mobilises toxic metals like aluminum. Once on a leaf or needle, acid rain disrupts the operation of the stomata, the tiny openings that permit a tree to 'breathe.'" 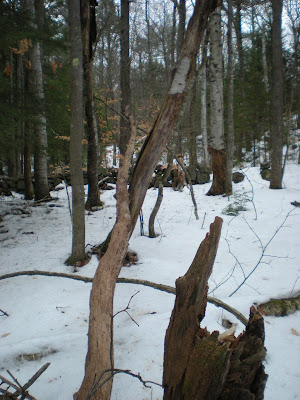 "The process of photosynthesis is thrown off balance, and subtle changes take place in the internal chemistry of the tree that result in discolouration and premature aging. Finally acid rain washes away vital nutrients from the leaves and needles so that the tree slowly starves to death, its respiratory, circulatory and digestive systems being crippled. Much like an AIDS victim whose immune system has broken down, the ailing tree is defenceless against the ravages of nature." 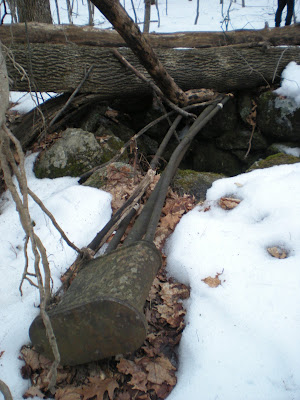 "Experts now say that precipitation these days has become more acidic since the onset of the industrial revolution in the mid 19th century. Measured on a chemical scale of pH from 0 to 14 (most acidic to most alkaline), acid rain is defined as precipitation below 5.6. In most of the industrialised countries of Europe, rainfall now has a pH between 4.5 and 5.5. In some parts of Italy, it has been recorded as low as 2.6 or acidic than table vinegar, which has a pH of about 2.9." 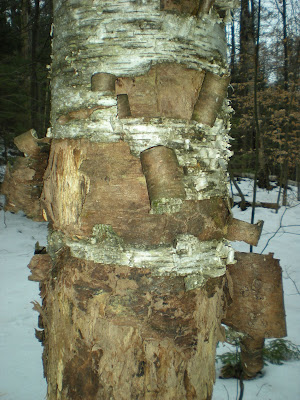 "What makes tracking down the cause of toxic poisoning so frustratingly difficult is the caprice of the wind. Modern smokestacks rising more than 1200ft, may spare the surrounding countryside. But they can emit pollutants high into the air, where they travel along wind-formed "skyways" that can carry them hundreds of miles even beyond the country that produced them. That answers the dilemma of the non-industrialised countries like Bangladesh who are not sinners but have to pay a heavy price for other's faults." 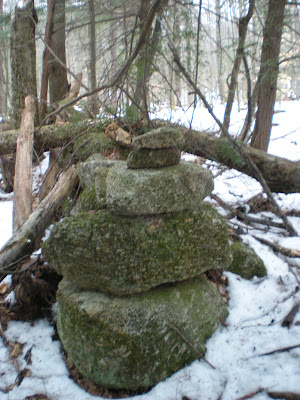 "The dying forest has had a greater importance to the Germans than any other issue. They look at forests as being more important than their own health That leads us to think how much oblivious and unconcerned we are about the depletion of our forest resources through factors like dying forest syndrome or top dying disease in the Sunderbans other than rampant logging by interest groups." 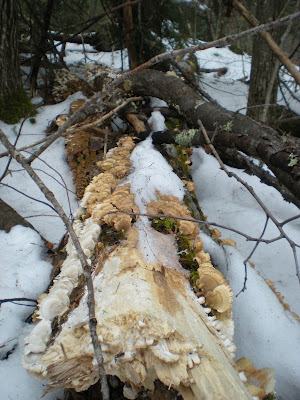 Periodically I perform a search on youtube for videos of dying trees.  More and more are appearing, from all around the world.  People are noticing that trees are imperiled, and they are searching for answers.  Sometimes they speculate the trees are dying due to drought or disease or insects or fungus (even though as is constantly repeated here at Wit's End, ozone exposure makes trees and other plants more vulnerable to all of those secondary, naturally occurring stressors, normally held in check). 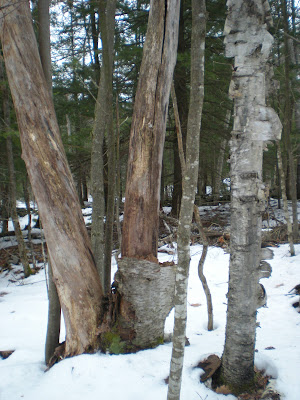 There is never a lack of blame for the environmental disaster du jour, whether the Fukushima nuclear plant or the Gulf oil spill.  Unfortunately, quite a few people who have realized trees are in decline prefer to believe that there is a New World Order conspiracy to irradiate the atmosphere from cell phone towers or HAARP, and/or to shower chemicals from airplanes...for purposes ranging from "useless eater" population reduction to ameliorating global warming to unknown.  The latest theory, espoused on the film trailer at the very end of this post, appears to be that Monsanto is using chemtrails to kill all the crops by creating artificial droughts, in order to drive farmers out of business, so they can buy up all the cropland and control the world's food supply.  Okay I grant you, THERE'S a motive! 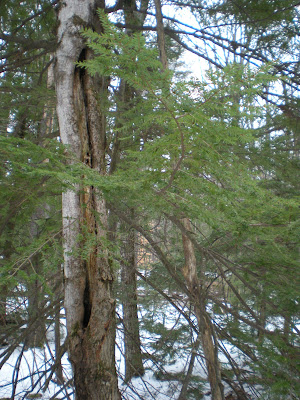 However, as I point out to such adherents to no avail, there isn't any reason to look further for an explanation of tree death than the polluting emissions we are blatantly and unapologetically putting into the atmosphere, quite openly and constantly, from cars, trucks, airplanes, boats, trains, two-stroke engines like chain saws, lawn mowers, ski-mobiles, snow plows, bulldozers, and escaping fumes from drilling for gas and oil, not to mention all the industrial solvents and agricultural fertilizers and electricity production from coal and biomass burning. 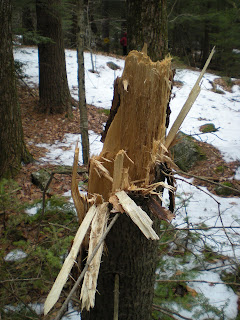 Anyway, just for the record, following are some home-made videos demonstrating the problems that people see, it would seem, everywhere.  I don't imagine anyone but an Ozonista like myself would actually want to watch them all - I simply want to illustrate how widespread forest decline has become that it is being digitally captured, from New Zealand to British Columbia to Virginia to Texas, New Jersey, Florida, Massachusetts, Pennsylvania, Louisiana, England and Holland.  In just this batch.

This first one has a sense of humor!


The above is from England, but the scenes could have easily been filmed around Wit's End - whereas the astonishment in the caption mirrors my own, it says...Are these trees just wintering?  This is just a few of the trees which are dying near my home in the East Midlands (although my photos don't reveal the true picture) but the authorities tell me everything is normal for this time of year.  Could it be that Sudden Oak Death and Sycamore Black Spot are not confined to the South West and Wales?  So many species of tree seem to be affected, Leylandi, Larch, Beech, Ash and Willow, as well as the faithful English Oak trees.  The hedges are disappearing too - privet and box which I thought were evergreen are losing their leaves, and elderflower and even hawthorn are dead and covered in yellow algae/lichen. Is the natural fall of leaves in the winter masking something more sinister? Is anyone else worried about the trees in their area?

The next and another further down are by a fellow who, with the collusion of an attorney, set up a phony "trust" scam, and has managed to convince some townships around Boston that the reason they are losing so many trees is gas leaking underground.

Loggers love to show off their chainsaws, here are a couple:

The following is one of many uploaded by a prolific videographer in British Columbia, who is fond of coarse language, so if you like that sort of thing you can go to YouTube and check out his other forays.

The Monsanto theory (of course, I do think Monsanto is monstrous, I just think the company is probably run by people who are far too stupid and self-centered to plot global domination...I hope...you decide!)