Well, I guess that's insulting to women, so as a feminist, I apologize.  However, I have no regrets about referring to the Tar Sands action in Washington as being devoid of male hormones, for which I have a healthy respect. 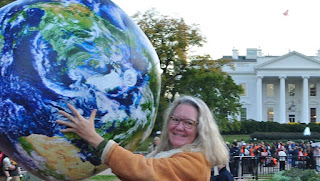 I'm not sorry that I participated in yet another overly and insidiously polite demonstration sponsored by 350.org, because I was able to spend time with other like-minded activists who hailed from Los Angeles, Vermont and everywhere in between...the tiny percentage of people who understand the existential threats we face from rapidly converging catastrophes - the multiple depletions and excesses from peak oil, overpopulation, resource extraction, pollution, climate change, economic exploitation, and war.  We first went to Occupy DC, a movement that the climate change and environmentalists initially disdained, and now embrace.  Hey, welcome!!! 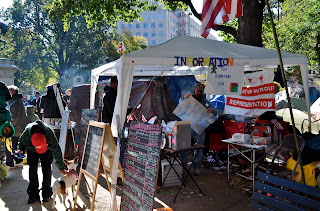 The Great Convulsion is imminent, and it is quite refreshing to meet other people who understand it, and who grapple with the moral qualms of how to respond to the burden of that knowledge.  I am grateful to meet them, and to share our struggles. 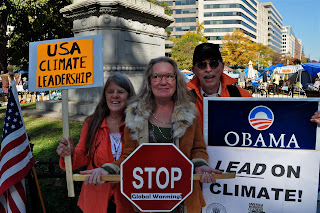 Much to my dismay, the rally at Lafayette Park began, incredibly, with an American patriotic anthem, and ended with an Amen.  Literally, I'm not kidding.  The very bullshit that got us into this mess, American Empirical exceptionalism, the pervasive but wholly unjustified conviction of American entitlement, oh! and religious baloney, began and then ended the program.  How insulting was this to the important participants that are the Native People of Canada who are most directly affected by the destruction of the tar sands, and who appear to worship Mother Earth, not amen to some Christian "god"? 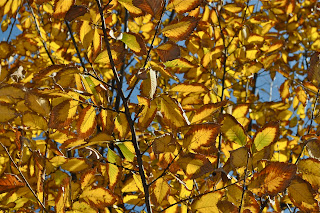 The most inspiring speaker, who I heard speak twice, once last night at an orientation and again today in front of the White House, was Canadian author Naomi Klein.  She's brilliant, and I hereby nominate her to lead these disparate, fragmented efforts into an orchestrated coordinated movement to thwart the corporations from their domination and exploitation of the earth.  How anyone imagines we are going to beat them at their own game by following their rules, I don't know!  The very notion of private property, money and wealth needs to be overturned - not to mention unsustainable growth, especially human population - but I didn't hear any mention of that in the Keystone XL program.

Remember that this blog is primarily about the damage ozone does to trees, a consequence of burning fuel pollution, often resisted by even the most stalwart climate change activists - even though evidence of dying trees is everywhere to be found.
In late September a panel of experts was convened, to discuss Obama's decision to ask the EPA to refrain from passing stricter ozone standards based on the scientific recommendations that had been ignored by the prior administration.  Below is the video of that discussion, which is described on youtube as follows:

"With a weak U.S. economy shadowing his presidency, Barack Obama has announced his request that the Environmental Protection Agency (EPA) withdraw draft air quality standards that would have tightened ozone pollution controls. President Obama cited "the importance of reducing regulatory burdens and regulatory uncertainty" as the economy recovers. Public health experts and environmental advocates howled at the decision, raising concerns about the health impacts of ozone -- a major culprit in smog. In contrast, business groups praised the announcement as a means to prevent job losses and protect employment growth; media have reported that the restrictions could have cost up to $90 billion annually. This Forum webcast examined the scientific and economic arguments around this divisive decision. The event is part of the Andelot Series on Current Science Controversies."


Following are some of the comments by one of the panelists, Douglas Dockery, who is Chair of the Department of Environmental Health, at the Harvard School of Public Health.  Of course, the main focus of Wit's End is the impact of ozone of vegetation, particularly trees, so keep in mind that trees, most species of which live for far longer spans than humans, are therefore exposed to many more years of air pollution absorption.

"There have been remarkable improvements in air quality in the US in the past four decades.  EPA reports a 30% decrease in the national mean maximum daily ozone concentrations between 1980 and 2009.  Nevertheless, the fraction of the population living in regions with high ozone are much more frequent than any of the other criteria pollutants and the American Lung Association reports that 48% of people in the US are exposed to ozone levels above the standard.
...Moreover, while the number of high days has gone down and the number of violations have gone down we see that the background concentrations have been increasing worldwide especially in the cleaner areas, which suggests that the background levels of ozone are increasing around the world."

If you want to raise your blood pressure, watch the whole shabby thing!  But first, remember that bolded quote - background concentrations have been increasing worldwide -  and then think about this picture, inadvertently placed on Jeff Master's Weather Underground.  Notice anything funny about the leaves? 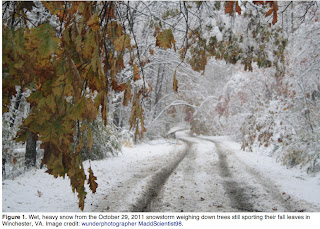