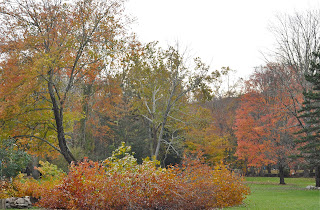 Maybe I should call this a prelude, instead!  The number of trees and branches falling continues to grow, incredibly, six days after the storm hit and almost as many since the snow melted.  This afternoon I took a few representative pictures, the first because I loved the color of this split maple.  I wasn't surprised to see that the interior was already quite rotted.  Despite the tendency of people to blame an early snow, the fact is, the trees are weakened from cumulative exposure to ozone.  They are like dandelions gone to seed, just waiting for a puff of wind to disintegrate. 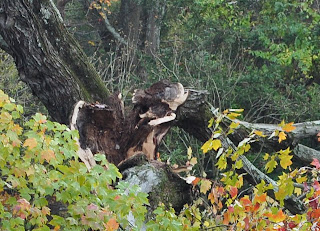 Mosle Road is almost impassable, the cleaning crews are loading trucks with branches and hauling them away. 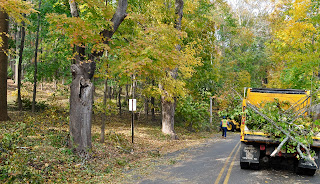 There are two items of significance in this scene, one is that these branches, like an enormous majority, are smothered with lichen.  I don't care how many foresters tell me lichen doesn't harm a tree - this degree of lichen growth is closely associated with breaking branches and dying trees.  It's also only been going on for the past three years, before that, you never saw lichen covering the bark to anything like this extent. 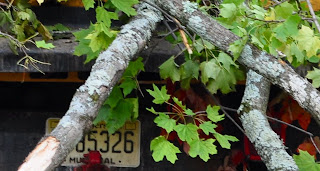 The other important thing to note in this scene is the condition of the standing tree - it has been losing branches for some time, and is full of deep holes.  This tree is perfectly typical. 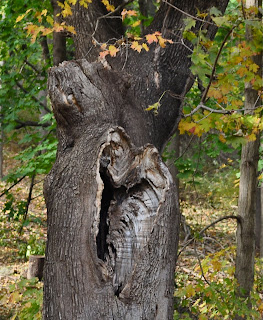 Why should trees be dying now from air pollution?  Perhaps this story, just out today, might explain it!

The global output of heat-trapping carbon dioxide jumped by the biggest amount on record, the U.S.Department of Energy calculated, a sign of how feeble the world's efforts are at slowing man-made global warming.
The new figures for 2010 mean that levels of greenhouse gases are higher than the worst case scenario outlined by climate experts just four years ago.
"The more we talk about the need to control emissions, the more they are growing," said John Reilly, co-director of MIT's Joint Program on the Science and Policy of Global Change.
The world pumped about 564 million more tons (512 million metric tons) of carbon into the air in 2010 than it did in 2009. That's an increase of 6 percent. That amount of extra pollution eclipses the individual emissions of all but three countries — China, the United States and India, the world's top producers of greenhouse gases.
It is a "monster" increase that is unheard of, said Gregg Marland, a professor of geology at Appalachian State University, who has helped calculate Department of Energy figures in the past.
Extra pollution in China and the U.S. account for more than half the increase in emissions last year, Marland said.
"It's a big jump," said Tom Boden, director of the Energy Department's Carbon Dioxide Information Analysis Center at Oak Ridge National Lab. "From an emissions standpoint, the global financial crisis seems to be over."
Boden said that in 2010 people were traveling, and manufacturing was back up worldwide, spurring the use of fossil fuels, the chief contributor of man-made climate change.
India and China are huge users of coal. Burning coal is the biggest carbon source worldwide and emissions from that jumped nearly 8 percent in 2010.
The world is slowly using more coal and less natural gas when it should be doing just the opposite because of climate change, Marland said.
Posted by Gail Zawacki at 4:26 PM