As can be seen in this photo from Occupy Portland taken Thursday, the police have run amuck, using pepperspray against peaceful, nonthreatening citizens for no reason other than intimidation.  Quite frankly, it's disgusting and every American should be outraged.  The fact that the recent raids and ruthless crackdowns seem coordinated at a higher level might be because, um, they're being coordinated at a higher level.  Queen of Snark site, Wonkette, has the story.  Makes you almost think Jesse Ventura has all that conspiracy stuff right, after all. 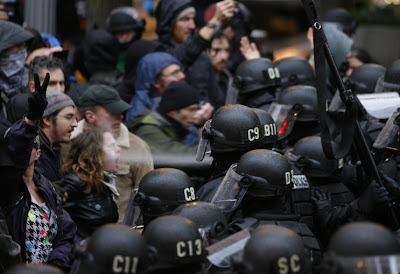