BY ANDY BICHLBAUM ON NOV 9 2011 - 8:21AM
CLOWNS ARRESTED IN NEAR-SUCCESSFUL ATTACK ON WALL STREET BULL
Matador, bull both survive to fight another day. 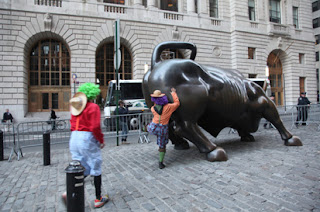 Earlier today, a small group of Occupy Wall Street activists engaged in a near-successful corrida against the Wall Street Bull.


The incident began when two clowns, Hannah Morgan and Louis Jargow, scaled the steel barricades protecting the landmark. The clowns began spanking and climbing the beast, traditional ways of coaxing a bull into anger in preparation for a Castilian corrida, or bullfight.


Within seconds, police officers grabbed both clowns by their colorful shirts and wrestled one of them (Jargow) to the ground. The other (Morgan) continued to play the harmonica until an officer removed it from her mouth. 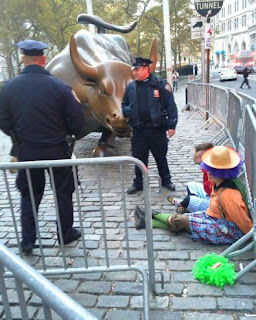 With the officers thus occupied, a matador in full traje de luces leapt onto the hood of the patrol vehicle parked in front of the bull and boldly presented his blood-red cape to the beast.
"I wondered whether I, neophyte matador, could bring down this behemoth, world-famous for charging towards profit while trampling underfoot the average worker," said the OWS activist/torero whose first fight this was. "Come what may, I knew I must try." 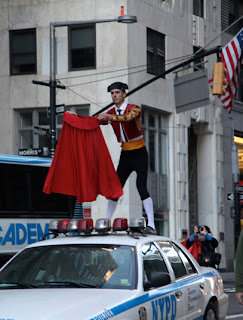 Police officers took no notice of the matador, occupied as they were with the clowns.
"This bull has ruined millions of lives!" wailed clown Jargow as he lay on the ground face-down. "Yet he and his accomplices have been rewarded with billions of our tax dollars—and we, here to put a stop to it all, are thrown to the ground. ¡Un escándalo!" 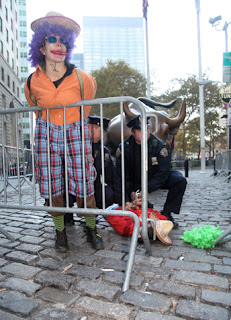 Both clowns were charged with disorderly conduct and released an hour later; they returned to Zuccotti Park to great fanfare. The Wall Street bull continues to rage. 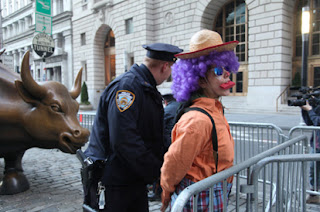