"A Powerful and Obnoxious Odor of Mendacity" - Big Daddy, Cat on a Hot Tin Roof

Grrrr!  Greenman posted a link to the Duke tree study I wrote about yesterday, reporting that trees are not migrating north and up elevations according to climate model predictions.  Of course they aren't, because they're dying from ozone in every direction!

Anyway, it was not a nice thing to wake up to first thing this morning, for several reasons.  As Dorothy Parker was wont to answer the phone whenever it rang, "What fresh hell is this?"  It never ends...

First, was the video he included from the Union of Concerned Scientists promoting urban gardens.  I don't want to denigrate the nice man who is planting trees in Chicago, but he repeats one of the common assertions that annoys me most - that planting trees is beneficial because they absorb our pollution!  And they return good fresh oxygen!  ...without ever wondering what happens to the tree when it absorbs pollution.

That's akin to saying it's nice that little children absorb pollution when they breathe, without ever wondering whether it gives them asthma!  Furthermore, the trees crowns in the video are thin.  You can see by the flowers - cone flower and Joe Pye weed - that it was produced in high summer, so the trees should be fully leafed out.  And yet the crowns are thin, the sun is pouring through them, and the ground is littered with leaves that have fallen off. 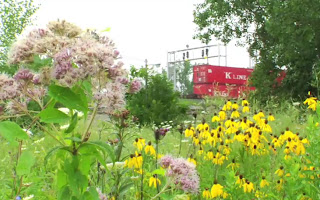 Even worse though were comments left by one daveburton, linking to a study from UMichigan about their FACE program, which claims that ozone damage is offset by increased growth from higher levels of CO2.  The duplicity is so rank that it has rendered me aghast.  Following is the sequence of comments from daveburton and me (so far) with screen shots from the video (which is embedded at the end).


This photo is part of the new release from FACE, linked to by daveburton: 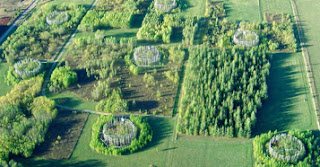 It's attributed to David Karnosky, who must be rolling over in his grave.  Obviously, since he passed away in the fall of 2008, it is showing the FACE experiment before they cut down the trees.  It has always been a source of deep regret for me that I was never able to ask Dr. Karnosky about ozone - he died almost the same time that I realized the trees are dying.  I think he knew how serious the threat of ozone is to forests, and would have been less likely to dissemble as the damage has been increasing, because he published numerous papers about the mechanisms of insects and disease attacks in elevated ozone.  For his colleagues to shamelessly use his photo from several years ago to illustrate their current "research" amounts to a reprehensible calumny of his legacy.  Here's a more accurate, older release:

This video, produced when Dr. Karnosky was still alive, (link in case it doesn't play here) tells you all you need to know about the "...sharks that smell blood in the water."  Notice the speckled and shriveled leaves in the elevated ozone - exactly the way all leaves have been looking, everywhere, this past growing season!

Here is the video from the Union of Concerned Scientists from which the screen shots were taken: