"The Perfidy of Sarah Palin"

I have been following the lies of Sarah Palin mostly because her outlandish escapades afford welcome comic relief from fretting over ecosystem collapse. But there is a serious side to her faked pregnancy and her creepy fundamentalism and vicious exploitation of the environment. The complicity of the press in enabling her to continue the charade - even with the sickening, cynical exposure of her teenage daughter's out-of-wedlock second pregnancy as a diversion from the first - is important. The press is owned by corporations and they refuse to expose the lies by Sarah Palin just as they are promoting lies by energy companies about climate change. Two videos produced on Palingates demonstrate this explicitly, as exemplified by this screenshot from the end of Part II: 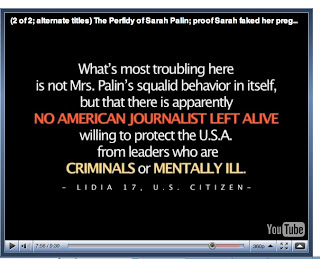 Note: NONE of the many blogger who have accused Sarah Palin of faking the pregnancy have been sued by her - because it's all true! If she sued them, it would be revealed in discovery that she is not the mother of Trig, so she can't.