Rumbles of Collapse - from Ella Fitzgerald and Marilyn Monroe!

Everyone knows the East Coast is having a heat wave - and temperature records are being smashed all of the world. The cognitive dissonance this creates for climate change deniers is making them quite irrational, to a frankly frightening degree.
As chronicled in the UK Guardian, the crazies are coming out, especially in the good ol' USA, where climate scientists are the recipients of truly atrocious hate mail and outright threats.

"The scientists revealed they have been told to "go gargle razor blades" and have been described as "Nazi climate murderers".
"Professor Stephen Schneider, a climatologist based at Stanford University in California, whose name features in the UEA emails, says he has received "hundreds" of violently abusive emails since last November. The peak came in December during the Copenhagen climate change summit, he said, but the number has picked up again in recent days since he co-authored a scientific paper last month which showed that 97%-98% of climate scientists agree that mankind's carbon emissions are causing global temperatures to increase."
"The effect on me has been tremendous," said Schneider. "Some of these people are mentally imbalanced. They are invariably gun-toting rightwingers. What do I do? Learn to shoot a Magnum? Wear a bullet-proof jacket? I have now had extra alarms fitted at my home and my address is unlisted. I get scared that we're now in a new Weimar republic where people are prepared to listen to what amounts to Hitlerian lies about climate scientists."
"Professor Michael Mann, director of the Earth System Science Center at Pennsylvania State University and leading proponent of the "Hockey Stick graph", said his experiences of hate mail were "eerily similar" to those described by Schneider. "I'm not comfortable talking about the details, especially as some of these matters remain under police investigation," he said. "What I can say is that the emails come in bursts, and do seem to be timed with high-profile attack pieces on talk radio and other fringe media outlets."
"Another climate scientist, who wished to remain anonymous, said he had had a dead animal dumped on his doorstep and now travels with bodyguards."

Extreme heat and food shortages are to become the norm, astonishingly quickly, as illustrated by this story - "Yellow Rust Damages Crops in the Middle East," - with maps from NASA , the first March 22 and the next April 6th, a very short period of time. I'm not qualified to inveigh as to whether ozone played a role in this crop failure, but I will say, it's suspicious! Exposure to air pollution increases the damage done by disease, pests, and fungus!

"Yellow rust does more than advance the timing of plant growth. As much as 50 percent of an infected wheat crop can be lost, and in severe cases, the entire crop may be lost, said the U.S. Department of Agriculture’s Foreign Agricultural Service."

I found the maps at this website, a no-nonsence purveyor of doom for anyone so inclined.
That's the land, but what about the sea?
Desdemona links to an article about a report that "brings together dozens of studies that collectively paint a dismal picture of deteriorating ocean health."

"A sobering new report warns that the oceans face a "fundamental and irreversible ecological transformation" not seen in millions of years as greenhouse gases and climate change already have affected temperature, acidity, sea and oxygen levels, the food chain and possibly major currents that could alter global weather.
"This is further evidence we are well on our way to the next great extinction event," said Ove Hoegh-Guldberg, the director of the Global Change Institute at the University of Queensland in Australia and a co-author of the report.

Volcanic activity and large meteorite strikes in the past have "resulted in hostile conditions that have increased extinction rates and driven ecosystem collapse," the report says. "There is now overwhelming evidence human activities are driving rapid changes on a scale similar to these past events.

"Many of these changes are already occurring within the world's oceans with serious consequences likely over the coming years."

On top of which is this other tidbit, that the lobster population has crashed! It really should be perfectly obvious to anyone with even just a pea for a brain 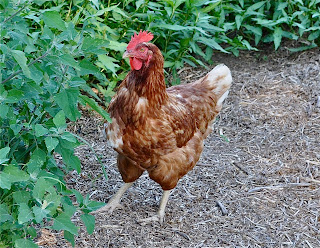 that global heating has begun in earnest - but for those who like to see it proven in charts and graphs and trends and record-smashing events Joe Romm has an excellent roundup at ClimateProgress.
Here's another diverting version of Heat Wave!

On to the rumblings of collapse...On the fourth of July, Significant Other and I went to a favorite seafood restaurant, where we splurge on rare occasions. The prepared food at McCormick & Schmick's is uniformly disgraceful, with gloppy sauces slathered unconscionably on most everything they cook - but they have intimate, cozy wooden booths that remind me of long-ago meals in San Francisco at the bustling, historic Tadich Grill which in hindsight seem magical - actually at the time they were and ALL of the food was incomparably scrumptious...but most importantly, we like it because they have always offered at least 6 varieties of raw oysters and often even more, which are impossible to ruin.
Our routine is to order a Kettle One Martini straight up with extra olives, and the large oyster sampler to share, which has two each of the 6 varieties...and maybe some of the daily specials if we require more.
Well, those days are over. Now, they only carry four kinds, period. For the old price for 12, you now get 8 oysters. I don't want to sound maudlin and self-indulgent, but this made me sad. We speculated that the increase in price and lack of availability might have to do with the ban on fishing in the Gulf. Perhaps the restaurants in New Orleans that specialize in po' boys are siphoning off the oysters from the higher latitudes. Then again, perhaps these delicious mollusks are just dying off, from ocean acidification.
This seemed a depressing line of discussion which led Significant Other to mention helpfully that the price of beef was suddenly ridiculously low, which I had noticed in the grocery store last week but hadn't thought about it. "Ah-ha!" I declared. "When I went to the pet store to buy dog treats, which are byproducts from beef not consumed by humans, they had none - and told me that demand for beef was low because of the depression (oops am I supposed to say recession?) and there were no doggy chews available.
So, all the laid-off workers who used to eat filet mignon are now switching to sausage and chicken, and there is a glut of beef on the market...the producers have lowered the price steeply, maybe to lure sticker-price-shy consumers back to the habit. But of course this won't last, as grain crops fail, and there's nothing to feed the cattle, and they starve or are slaughtered prematurely. Kind of like Argentina last year. And then beef will become incredibly expensive, available to only the very rich, and next people will be forced to turn to the stocks of wild venison and opposom, presuming any survive.
The ecosystem is collapsing at a dizzying rate. It's too bad that it is so hot and dry, because that's enough to kill all the plants, and then people will still be able to blame it on the weather. Sure, the heat and drought and faster evaporation are all going to kill trees and other vegetation eventually. But what's really getting them, and what we could do something about, at least for the short-term to buy some time, if we wanted to - is the pollution in the air.
How do I know that?
Well, I concede that drought could cause leaves to shrivel and go limp and wilted, like my formerly lovely varieagated dogwood overhanging the pond. 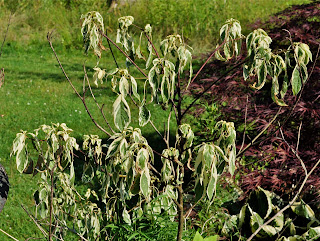 Or this ground cover, which prefers soggy feet: 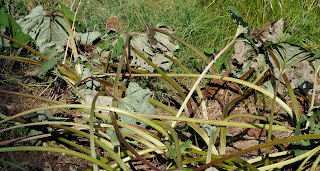 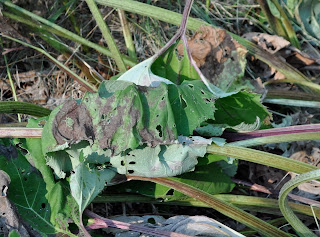 but then I also see so much of this: leaves that are deformed. Ozone will injure individual leaves and render them ultimately brown and dead. Ozone will also over time enter the tissue and cause damage to cells, and what I am seeing in many species is bizarre alterations in shape, size, and texture indicative of genetic, not topical damage. 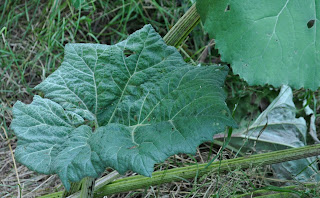 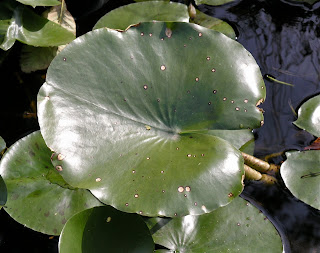 Here is my pond now. The leaves are already in much worse condition than last October. 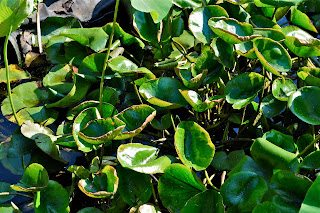 When I say there is an accelerating trend, that is what I am referring to. 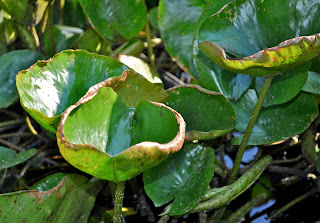 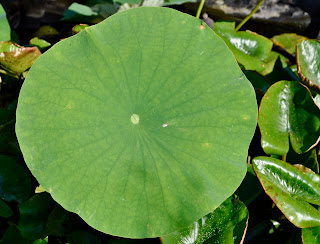 And this one taken in July last year. Both have a loss of color, and prominent veins, from a lack of chlorophyll. 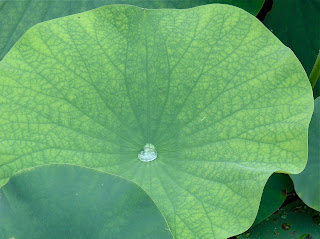 This is how they looked by last October, even though the weather was still warm: 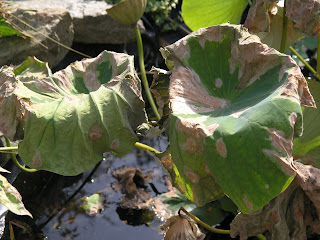 The lilies and lotus are always in water, yet they still exhibit the exact same symptoms of chlorosis, stippling of damaged stomata, singeing of edges, overall stunted size - as this Japanese climbing hydrangea! 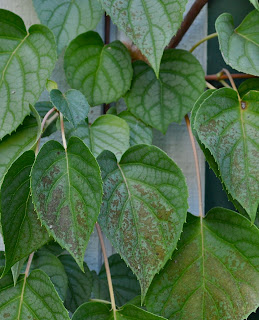 It's also true that plants in pots being watered on a regular basis have the identical symptoms as plants in the ground. So until somebody can explain why that should be, I am going to stick with the theory that something in the air (ethanol emissions?) is having a terrifyingly rapid impact.
It's like the Rutgers professor who said to me in an earlier conversation - "There is no way ozone would make leaves fall off trees...that would take an incredible amount of ozone!"
"Exactly," I agreed.
Latest comment at Climate Progress, to an article about the debate on how to control carbon emissions - through EPA regulation, or legislation:

Of course I agree with this comparison – as it stands. However, I think the use of electricity and gasoline should be rationed. Everybody, rich or poor, gets allotted the same amount, and non-essential use should be banned (driving around aimlessly to look at the trees that your emissions are killing would be high on the list of no-noes, and so would be lawn mowing, and leaving the doors of air-conditioned shops open, etc.) until there is an excess of clean energy, while the energy that pollutes has become obsolete.

Because…this statement in the op-ed:

“Failing to make low-cost emissions cuts today would force us either to make more expensive cuts in the future or to see greenhouse gas concentrations rise to the point where severe damage to human and natural systems would become unavoidable.”

is pure rubbish! Concentrations have ALREADY risen to the point where severe damage to human and natural systems IS unavoidable and in fact, is already well underway. Acidifying oceans anyone?

Who are we kidding? We need to treat this as the emergency it is and prepare people to willingly make sacrifices and adjustments in their lifestyle, because if we don’t, it’s going to happen anyway, in a significantly more unpleasant manner than voluntary.

How are people likely to react when this becomes too obvious to ignore? They already are - out of state gun permits from Utah are skyrocketing:

"In 2004, Utah received about 8,000 applications for the permits. Last year, 73,925 applications were submitted — with nearly 60 percent coming from nonresidents."

This is harrowing! For respite? Check out all the pictures of the glorious Utah vistas here. Just breathtaking...