Susan, a notorious climate activist known to impersonate an evil coal plant when the occasion requires, lives in the Boston area. She is a fellow passionate Nature enthusiast, and as such spends as much of her time as possible at a rudimentary cabin in the fabled New Hampshire woods, where with her husband Roger she hikes, skis, and reads. She sees first hand the forest decline that is the main topic of interest here at Wit's End, and has been documenting the deterioration with photographs. 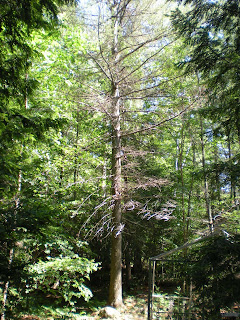 In this post she shares her thoughts upon re-reading the 1989 publication, "The End of Nature" and compares the early thoughts of its author to what she and I now believe is most likely a process of ozone killing trees - at a rapidly accelerating rate.
Thank you Susan for contributing these beautiful and terrifying images from New Hampshire and Massachusetts! What follows are more of her pictures, with her comments and passages she chose from the book: 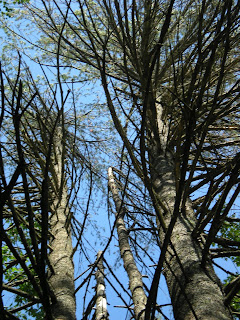 I am rereading Bill McKibben's "The End of Nature," written in 1989, to remind myself what was already known 21 years ago about the consequences of changing our climate faster than ever before in our geologic past. 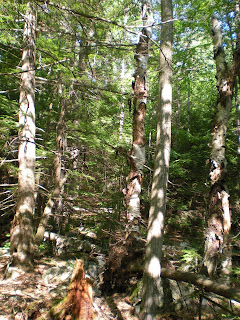 In the 2006 paperback version I have, on page 29, he recommends with acerbic brevity that in contemplating climate change we should think carefully about the ramifications of a world without trees: 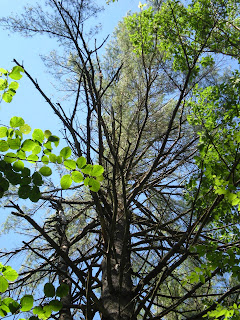 "When I walk outdoors in the morning, instead of the slopes of trees, instead of the craggy white pines on the ridge toward Buck Hill, there may be yellowing and browning leaves and needles, thinning crowns, dead branches, and rotting stumps." 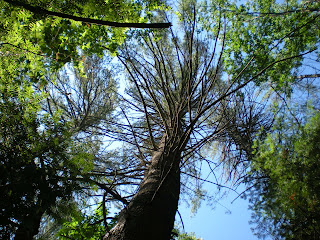 "This vast decline, this forest "dieback,' is not some distant proposition. A report described to a congressional committee last summer found that 'reproductive failure and forest dieback,' is estimated to begin between 2000 and 2050.'" 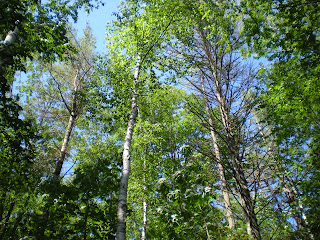 It's now 2010, and the dieback is well underway, and increasingly obvious to anyone who is paying attention to trees in the woods, along the roads, or in gardens or parks. The pictures above and below are birches. Bill quotes Dr. James Hansen next,

"'Things like birch trees and many evergreens (in the Northeast) may have a hard time surviving, even in the next ten to twenty years.'" 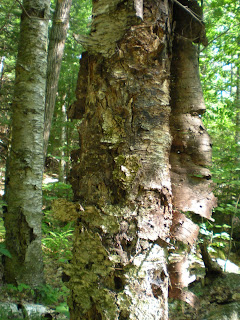 On page 77 he notes bitterly:

"As I walked in the autumn woods, I saw a lot of sick trees. With the conifers, I suspected acid rain. And so who walked with me in the wood..." 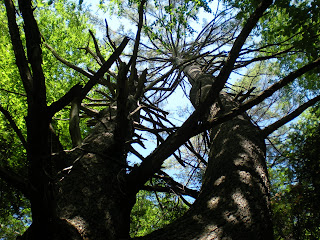 "...Well, there were the presidents of the Midwest utilities who kept explaining why they had to burn coal to make electricity and then there were the congressmen who couldn't bring themselves to do anything about it." 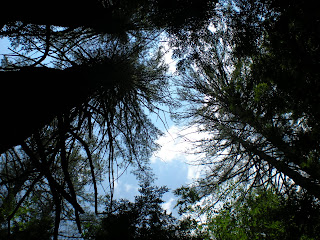 "...The walk along Mill Creek, or any stream, or up any hill, or through any woods, is changed forever...Note the small leaf size on the maples." 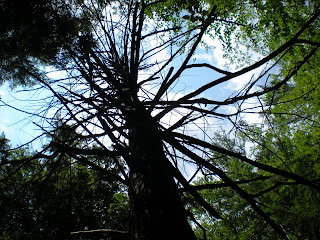 "The increased ultraviolet seems to limit leaf size, cutting the amount of energy the plants could capture from the sun." 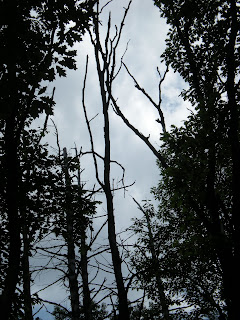 Another disruption for the trees is that, as Bill states (page 109),

"The climate is traveling..."

and trees that have evolved to live for centuries in a given ecological niche can't migrate at the pace required to keep up with the agricultural zones marching towards higher latitudes in mere decades. 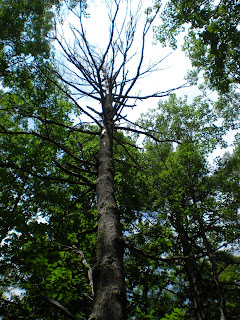 "'We are altering the climate,' says Stephen Schneider of the National Center for Atmospheric Research, 'at a rate ten to sixty times its natural rate of change.'" 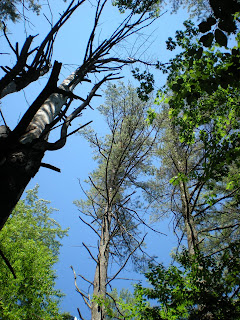 On page 107 Bill opines on the non-linear nature of global warming, 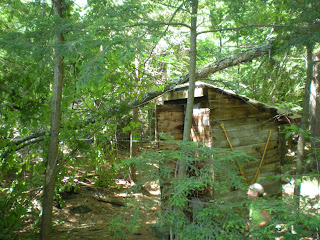 Certainly it was a surprise when a large branch from a gray birch, although it had appeared healthy, smashed onto our outhouse! 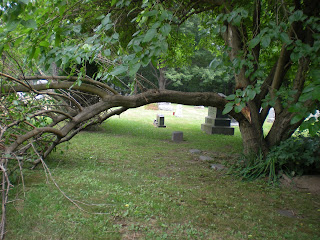 The following section is inspired by a large broken branch on my daily walk through the cemetery near my home in Massachusetts, which was not there the day before. I'm not sure what type of tree it is - it appears to be an exotic, non-native variety, which I can't exactly pinpoint in my reference books.

It is situated between a large stone marked with the surname Gray, and three flush headstones of Gray family members dying between 1915 and 1926 - Mabel, age 15, Anthony, 28, and Ethel Gray Nichols, 27. 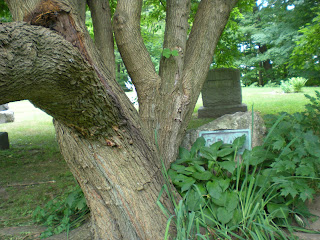 " When trees die, it is always hard, unfortunately, to say just why."

"'It's never going to be obvious that the climate change is doing it,'" said George Woodwell, an ecologist and director of the Woods Hole Research Center.'"

Perhaps this is why whenever I enquire of foresters or naturalists about so many trees dying, they invariably blame insects or fungal disease. Here's a case in point, not of a whole tree dying, but of a large branch that fell, randomly, on a clear, still 100.1 degree day in Bedford, MA. On inspection, it appears to be insect-driven, although it is still curious that the large branch was so weak that it collapsed without even a breeze to instigate the crash. 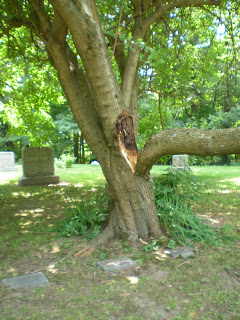 We would have expected a storm to bring this branch down so unexpectedly, with the rotting present inside its depth, but not on a hot but peaceful summer day. 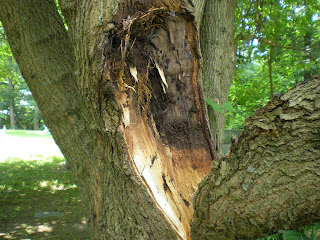 "The new 'nature' ...won't be predictably anything, and therefore it will take us a very long time to work out our relationship with it, if we ever do. The salient characteristic of this new nature is its unpredictability, just as the salient feature of the old nature was its utter dependability. .. virtually all settlement patterns [of people] testify to the dependability of nature.'" 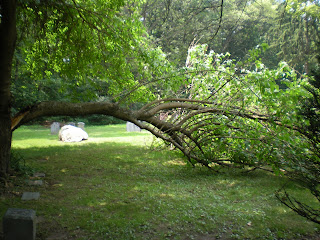 And his ironic corollary conclusion was,

"It is this very predictability that has allowed most of us in the Western world to forget about nature..."

which is, of course, why most of us, even those most alarmed about environmental pollution and climate change, are failing to observe the extent of the decline in our ecosystem, upon which even urban dwellers depend for their very existence...and failing to raise the alarm about the imminent threat it poses to all forms of life on Eaarth. 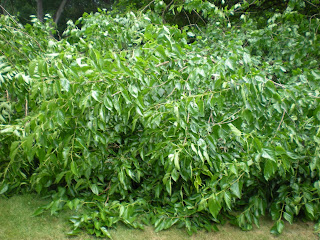 Notes from Wit'sEnd:
I think it's safe to say both Susan and I agree climate change in and of itself is likely to cause tree mortality, which ultimately will destroy the ecosystem as we have known and relied upon it for 10,000 years - if it isn't possible to reverse the trend. However contemporary evidence indicates overwhelmingly that there is more than warming, extreme weather and drought that is impacting vegetation - because brand new plants of all sorts grown from seed in nutrient-rich soil supplied with non-acidified water exhibit the same symptoms of foliar damage as do decades-old trees. Neither of us are scientists, but mere logic dictates that some agent or agents in the composition of the atmosphere - the invisible toxic cocktail of chemicals and their reactions to each other and UV radiation - are at the heart of the current, recent, unprecedentedly swift morbidity.

If only some qualified researcher would isolate the source - and then publicize it! - so that we could stop this insanity guaranteed to result in all the ugliness and violence and anguish that accompany mass famine. I found a sort of loony website, which is fascinating if only for its paranoia...nevertheless this one comment from July 4 gave me pause as it appears to be authentic. Too bad it is posted anonymously, I would love to talk to the author!

"I live in Western Quebec and our plants are dying. Within the last two weeks symptoms have showed across the board: White spots which turn brown/red then black and leave a hole in the leaf. Then the leaf will wither and die. Maple leaves on the ground look like they were bleached. Even milkweed and dandelion leaves turn black, show holes and in some places look like they have been sprayed. I have found the same signs on young soybean and corn crops, but not to the extent as on wild plants,yet I took a pH on rain water here last rain and it showed <5.0.>

Along with the temperatures the level of ozone in the atmosphere is rising. Here in New Jersey and I’m sure elsewhere the DEP has issued “severe weather” alerts, advising people to be cautious due to the toxic effects on human health. What that really means, but they don’t say, is that exposure to ozone causes cancer, emphysema and asthma attacks. And they rarely mention that the levels considered safe are not safe, and due to be revised soon, which will probably also not be really safe…and not enforced to the degree necessary to make them safe.

In the coming days as the leaves fall off the trees and shrubs and the crops shrivel up this will be blamed on the heat and lack of rain, without acknowledgement that aquatic plants in water and plants watered in pots and plants protected from extreme heat in buildings will also be exhibiting symptoms of foliar damage associated with exposure to ozone.

They’re also warning that there is “explosive fire potential” but fail to mention it is not just the hot and dry conditions but the fact that many, many trees are standing dead, ready to be torches.

It’s important to link rising temperatures to the changing climate , but it’s also time to link vegetative dieback to the “other” greenhouse gases so that people can make an informed choice as to whether they prefer their gas-powered toys, or food.