Yesterday I decided to trespass across a corn field to take some pictures. 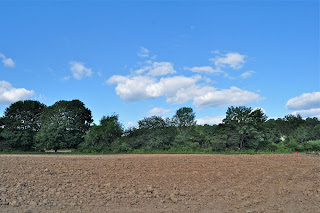 It was a little bit of a thrill - I think of it as a morally responsible act of civil disobedience (recommended by Clive Hamilton, as reported on an earlier post - Cognitive Dissonance in Costa Rica.) 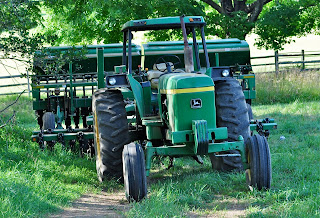 I knew I would find evidence on the foliage that the crops and trees are suffering from exposure to atmospheric toxins. 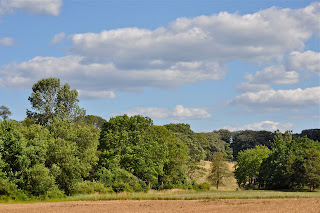 Sure enough, the crowns of trees were thin and the fields were strangely bare. 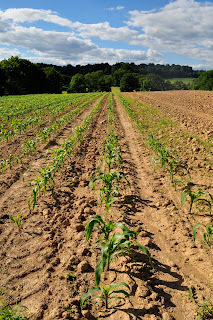 I have become so overwhelmed with the certainty that our ecosystem is collapsing that it wasn't until I was leaving the farm that I had a sudden flash of recognition that it was an incredibly, hauntingly, lovely afternoon, with an azure sky studded with glorious clouds, a balmy, wafting breeze...a day that in the past I would have relished with abandon. 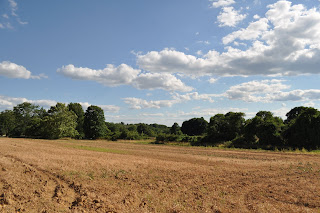 Among the dozens of letters I have sent to foresters, atmospheric physicists, biologists, plus federal, state, and local agencies, complaining about dying trees, I sent one to our newly elected governor, Chris Christie. Lo and behold, I actually just received a two page snailmail response, from Carl P. Schulze, Jr., the Director of the Division of Plant Industry in the state Department of Agriculture. 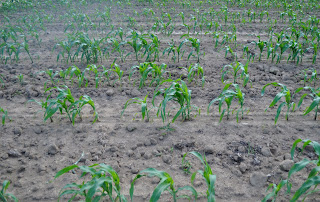 Of course I promptly called him. The first thing I asked him about was his statement in the letter which reads:

"However, the horticultural inspection staff in the Division of Plant Industry has not seen a dramatic increase in damage to vegetation due to air pollution as of late, and trends in plant samples submitted to the Rutgers New Jersey Agricultural Experiment Station Plant Diagnostic Laboratory have not indicated any major increase."

(Although prior to that he did write, "Air pollutants such as nitrous oxides, sulfur dioxide, ozone and nitrogen dioxide are known to damage plants and can reduce yields in susceptible crops"...duh) 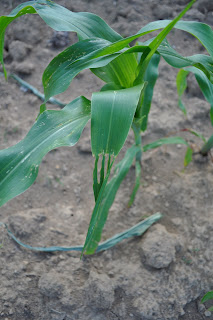 I asked him if Rutgers is using any scientific test for ozone damage, and after some impressive stuttering he acknowledged that any diagnosis must be made from visible symptoms. After a lengthy discussion about the likelihood that trees are dying at an accelerating rate, and whether ozone is causing it after decades of cumulative exposure, his bottom line was this: "I'm not saying you are wrong but we have not seen an increase." Could it be because somebody told them not to look? 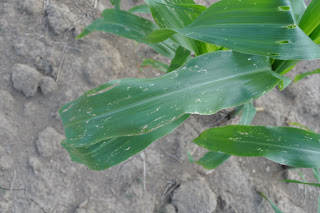 So next I called Richard Buckley, who was the source for his statement that Rutgers had not seen an increase - an increase in the number of samples being submitted for diagnosis, that is. A very rude young woman answered the phone and demanded to know why I wanted to talk to him. "I can help you," she insisted. "We're not even supposed to be here now, it's only because we're so busy." (!) I told her it had to do with a letter I sent to the governor, and that Dr. Buckley was already familiar with it having been consulted by Carl Schulze at the Department of Agriculture, who had referred me to him. "Oh is it about the ozone?" she asked. "Yes," I told her (clearly I had stirred up a bit of discussion in the lab), "can't I please just leave my number for him?" It was weird. Anyway, the phone rang as soon as I put it down even though she told me he was not there, and he informed me that he would examine leaves for $40 PER SAMPLE which they do as a public service - unfortunately, I could bring him millions of samples and I can't afford that. 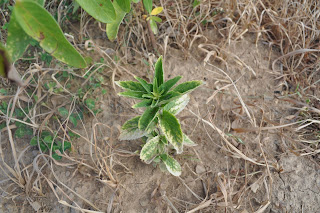 Even the weeds that have survived in the cornfield have chlorosis. True, it's possible that is because the farmer used herbicides. That wouldn't explain the wild berry patch in the hedgerow, however. 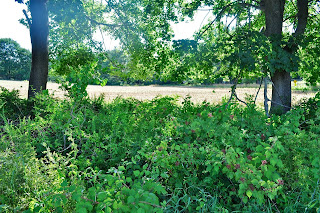 I will have to check but I think it is quite premature in the season for the wineberries to be ripening. 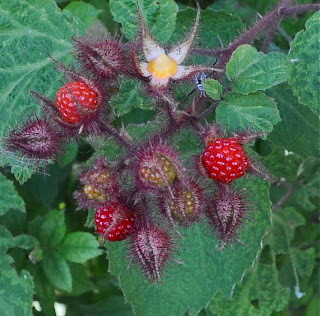 Anyway...the Professor admitted that nobody is surveying vegetation for the purpose of detecting ozone damage, the university lab simply examines specimens that are brought to them. And he seemed to be of the opinion that it has never been a very serious problem and isn't now, and contended that ozone couldn't possibly be responsible for leaves actually falling from trees leaving behind bare branches. 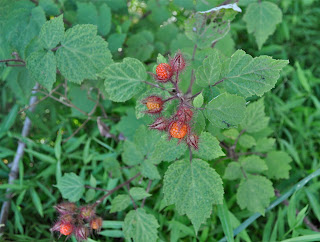 Nevertheless, I went through my usual harangue about the trees dying and every time he would say something like oh, it's gypsy moths then I would say something like no, there aren't any bugs...and he would say oh, it's bacterial scorch blight and I would say but, it's well established that ozone exposure increases susceptibility to disease and fungus and insects...and then he blamed the dying trees on a drought from 1997 - 2002 (not sure I remember the years correctly) but then I said, that aquatic plants growing in water all the time, plus plants in pots in enriched soil have the same necrosis and stippling. 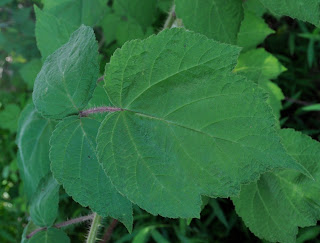 The berry leaves above are relatively normal, but those that follow are crumpling and lacking chlorophyll...By this point in the conversation, he was clearly getting annoyed with me, especially when I started in on my theory that maybe the damage is recently much worse due to ethanol being added to gasoline (since nobody has bothered to study what exactly might happen to vegetation when peroxyacetyl nitrates become widespread in the atmosphere). He finally demanded impatiently, "What's the point?" And I said "Well, my point is that plants are at the bottom of the food chain, and I have three daughters and I don't want them to starve to death." This apparently pushed him beyond annoyance to thoroughly irate. 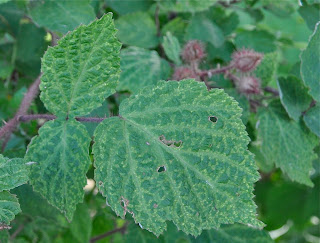 "THE WORLD IS DYING!" He barked. "There are too many people!" At first I thought he was mocking me sarcastically, but then I realized he was serious... "If you want to do something about it don't have children!" (It's a little too late for that.) He added for good measure, "If you want to write the governor, send something about that oil spill in the Gulf!" 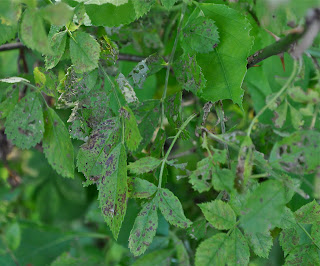 (Notice that the hated invasive multiflora is also stippled. I was glad to see that in spite of the many reports of pollinator demise, there are a couple of humming hives on the edge of the field.) 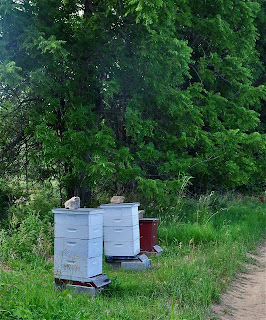 "Interesting analogy," I replied, "because that spill although horrible is minor compared to the pollution we put into the atmosphere every day by burning oil and coal. And besides, even if you got rid of the entire third world population, we would still have a climate change problem because Americans have such huge carbon footprints." That inspired him to segue into an anecdote about Norman Borlaug, a fellow plant pathologist, who according to him said that creating the "green revolution" - an increase in the productivity of crops utilized by the developing nations, for which he won the Nobel prize - was the "worst mistake of his life", because the population grew exponentially, in direct tandem. You won't find a confession like that on his wiki page though! 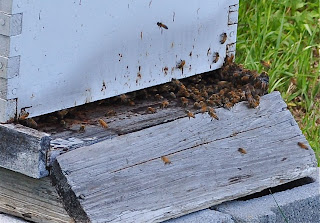 Oh well. Conversations like this sometimes make me feel like I am going insane. But then I remember that I know leaves didn't used to look like they do now, yellowed and brown and burnt...and trees were beautiful and healthy - and it was very odd for one to die, let alone dozens and hundreds. I am going to save the letter, a paradigm of exculpatory bureaucratic obfuscation, which after listing all the wonderful pollution-monitoring programs and hosting of the Biofuels/Bioenergy Working Group, which

"...seeks to further New Jersey's efforts to foster the development of energy sources other than fossil fuels..."

(naturally! the Department of Agriculture LOVES biofuel!), concludes without a touch of irony:

"To report hazardous dead standing timber along roadsides or other safety-related maintenance issues please contact the Department of Transportation at (609) 588-6211."