I was listening to All Things Considered on NPR yesterday when one of their fatuous announcers, I forget which one, announced in a perky aside that apparently, a confused dolphin that was trapped in Brooklyn's Gawanus Canal "didn't get the memo" that the waterway, long contaminated with dumping from manufacturing, has been designated a toxic superfund site, haha.  Isn't that funny??  The dolphin didn't get the memo.  Bwahahah, silly silly dolphin!  This enraged me and I thought immediately, you stupid bitch, don't you know that poor dolphin is going to die?? 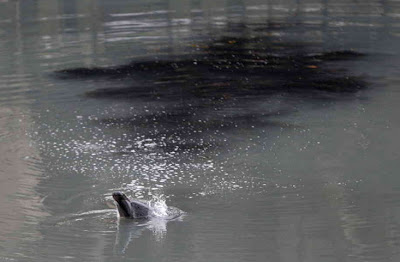 Sure enough, lo and behold, the dolphin has died, choking in visible filth.  Rescuers couldn't help because the water was too poisonous for them to get in.  For hours, people - with the exception of one bicyclist who climbed down to the surface - just watched this creature pathetically gasp and choke.
I tried but couldn't locate a clip to that brief announcement on the radio website - I think they don't preserve the news in their podcast of the longer stories - because I would have liked to post it so everyone could witness exactly how callously the talking heads at NPR are mired in disgraceful anthropomorphic myopia.  But hey, this blurb from an earlier AP account provides the same glibly puerile perspective:

The deep-freeze weather didn't seem to faze a dolphin that was making a splash Friday in New York's Gowanus Canal. According to authorities at the scene, the creature appeared to be adventurous, rather than stranded. (Jan. 25)