And Then There Were Two

Of the original six who were arrested at an Occupy Wall Street planned action across from the New York Stock Exchange on April 27, 2012, finally after five prior appearances and continuences and various dismisssals ("the People" were interminably not prepared), two of us went to trial yesterday.  Here we are with our co-conspirators, OWS jail support, and famous First Amendment pro bono attorney, Martin Stoler, Esq (the distinguished one in the stylish beret). 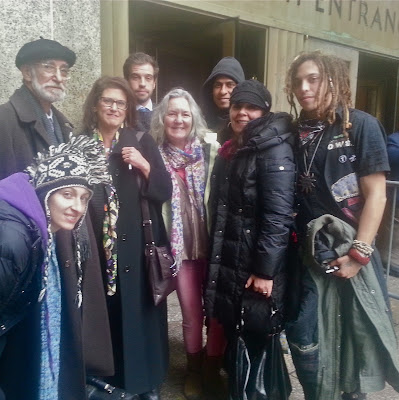 That was outside the courthouse during lunch break, when we still had high confidence we would be aquitted.  After all, the video of the event shown by the prosecutor (I always wanted to be a movie star!) was evidence that our protest had allowed plenty of room for movement along the sidewalk by pedestrians, and none displayed the "alarm" we were accused and then convicted of recklessly inciting. 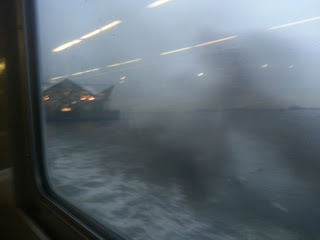 Well, it's one thing to read the newspapers er, alternative media and reach the sorry conclusion that our country  - from academia to government agencies to banks - is utterly corrupted by money.  I can now say though, it's quite another to personally realize that the judiciary is just as hopelessly in thrall of the corporatcracy as politicians.  After a long day in court, I had to go back on the ferry, swathed in black smoke, because the direct PATH line is still closed from Sandy.  I returned to New Jersey feeling curiously different.  I had the sensation of becoming an outsider...an outlaw, even though our sentence was "time served" - the six hours we had already spent jailed.  The only good outcome is that I would venture to guess this is the first time the term "ecopocalypse" has been entered into the record in a US court of law.  "What was that?" asked the judge, when I testified that my sign read "Industrial Civilization = Ecopocalypse".  I had to spell it. 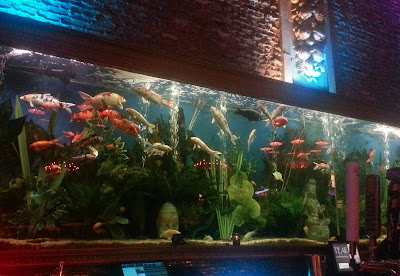 It was an hour until the next train, and freezing sleet had penetrated my rainjacket on the long walk through lower Manhattan, so I waited in this fabulous restaurant across the street in Hoboken and watched the fish.  The waiting room in the station had been padlocked, leaving no place to sit, let alone be warm.  Then on the train, with my cell phone battery fading fast, I got a call from middle daughter and learned through her tears that the house she is renting in Kentucky for her one-year veterinary externship had been robbed.  All but one necklace of the jewelry I have given her had been stolen.  When the battery flickered off I went from car to car, testing outlets to plug in the phone and call her back, but not a single one functioned.  The conductor told me that people had been complaining because the current fried their electronic equipment, so rather than fix it, NJ Transit is just letting the wiring break down and stay broken.  Upon hearing this a woman next to me rolled her eyes skyward towards the fumes.  "Why is this train still diesel?" she asked, "It should be electric".

Maybe NJ Transit is just having to spend so much money clearing tracks of all the trees dying from air pollution, there is nothing left over to repair or modernize.

No matter how you look at it, it was a shitty day.  Signs of systemic breakdown and collapse are already everywhere for those who care to look - which so far is only a very, very few.
Posted by Gail Zawacki at 9:33 AM