Rapper Lupe Fiasco was thrown off the stage of a pre-Inaugural event last night for speaking the truth (video below):

“I really think the war on terror is a bunch of bullshit
Just a poor excuse for you to use up all your bullets
How much money does it take to really make a full clip
9/11 building 7 did they really pull it
Uhh, And a bunch of other cover ups
Your childs future was the first to go with budget cuts
If you think that hurts then, wait here comes the uppercut
The school was garbage in the first place, that's on the up and up
Keep you at the bottom but tease you with the uppercrust
You get it then they move it so you never keeping up enough
If you turn on TV all you see’s a bunch of “what the fucks”
Dude is dating so and so blabbering bout such and such
And that ain't Jersey Shore, homie that's the news
And these the same people that supposed to be telling us the truth
Limbaugh is a racist, Glenn Beck is a racist
Gaza strip was getting bombed, Obama didn’t say shit
That's why I ain't vote for him, next one either
I’m a part of the problem, my problem is I’m peaceful
And I believe in the people."

Contrast that with the corporate money flow to our totally compromised, corrupted President, according to an article by Steve Horn at DeSmogBlog (excerpt below - more at this link):

Today is also the three-year anniversary of Citizens United v. FEC, a U.S. Supreme Court ruling that - in a 5-4 decision - deemed that corporations are "people" under the law. Former U.S. Sen. Russ Feingold (D-WI) - who now runs Progressives United (a rhetorical spin-off of Citizens United) - said in Feb. 2012 that the decision "opened floodgates of corruption" in the U.S. political system.

Unlike for his first Inauguration, Obama has chosen to allow unlimited corporate contributions to fill the fund-raising coffers of the entity legally known as the Presidential Inaugural Committee. Last time around the block, Obama refused corporate contributions for the Inauguration Ceremony as “a commitment to change business as usual in Washington.”

But not this time. With a fundraising goal of $50 million in its sights, the Obama Administration has "opened floodgates" itself for corporate influence-peddling at the 57th Inaugural Ceremony.
A case in point: the Obama Administration's corporate backers for the Inauguration have spent over $283 million on lobbying since 2009, the Center for Public Integrity explained in a recent report.

This has perturbed some.

“It’s a deeply disturbing move, and a reversal from the positive steps they took in 2009,” Robert Weissman, president of Public Citizen told Roll Call. “Corporations make donations to events like the inaugural festivities because they get something back in return." 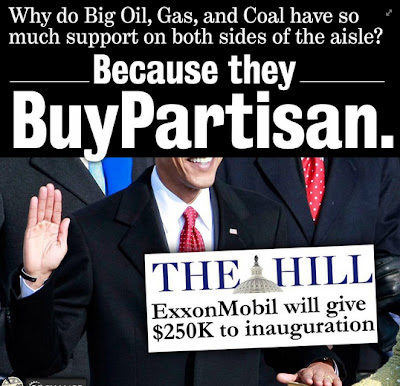