After early January, when I had already written the guest post Whispers From the Ghosting Trees so kindly published today by Greg Laden, several intriguing new studies have since emerged in just these past few weeks.  For any new readers who might stray by from Greg's blog, I thought I would do a quick recap, with links back to the posts that go into more detail on each.

This view is looking out my kitchen window just after sunset, at the steep hill that looms above Wit's End.  When I moved here just about a dozen years ago, the woods were impenetrable.  You could barely walk through without a machete, and you couldn't see through to the sky, even in winter, from the ground up to the tops of the trees.  Since then, so much of the understory has died, and so many trees have fallen, that it has become comparatively barren.  The trees that remain standing have ceased growing and are rotting.  This is absolutely typical of forests everywhere. 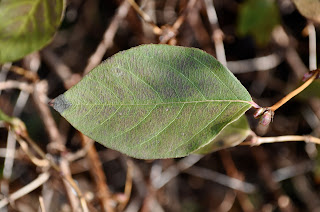 Today I went out and grabbed a few pictures to illustrate this post.  The leaf is from a Chinese honeysuckle.  It has some early buds and blossoms, but the leaves exhibit classic stippled damage to stomates from ozone pollution.  Before I knew that pollution is killing trees, I planted over two hundred, about eight years ago.  Most were just little twigs to start, but I splurged in front of the barn and bought three bigger saplings.  This is the red maple as it looks today. 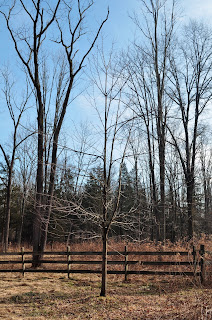 Of the many symptoms of decline, one of the more astonishing is the corrosion of bark.  Everywhere it is splitting and cracking, and on warm days in the winter, like today, it often oozes sap.  All those little round spots are liquid drops. 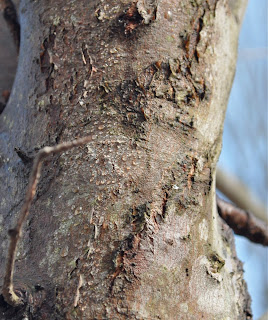 This branch is higher up, and it is seeping as well. 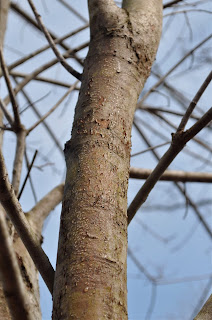 The sheen on the left is from wetness; there is a drop on the right.  Lichen is growing and the bark is breaking off, particularly at the joints where branches protrude from the trunk. 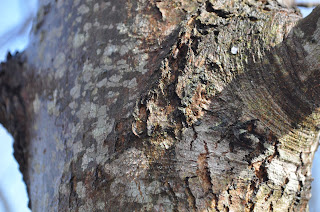 It's not just the maple - below is the willow oak, also oozing and cracking. 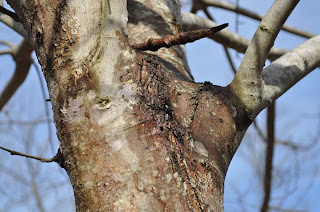 The lower trunk is a fungal disaster. 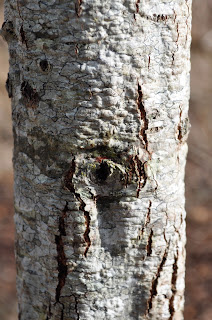 Daffodils are starting to emerge from under the katsura tree, even though it's still January. 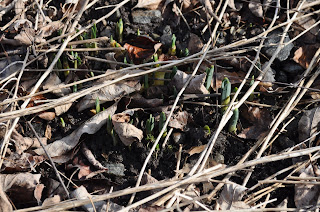 The way the bark is popping off is not normal, at all.  It's easily stripped, and feels spongey and squishy. 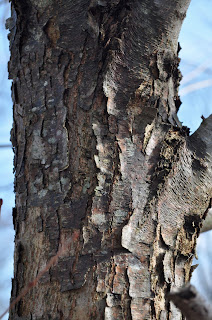 But, on to our links!  The first very interesting paper reveals the discovery that people living in neighborhoods where trees had been removed had significantly more cancers and respiratory disease than people living among trees.  The implications of this important study are discussed in A Travesty of a Mockery of a Sham. 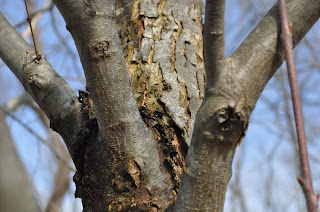 New research has determined that wildflowers in the UK are dying due to low levels of air pollution, which leads to some obvious inferences about trees and other vegetation, posted in Trashed.  Our government released a draft for public review of the National Climate Change Assessment; my commentary on the Forests chapter can be found at The Withering of All Woods is Drawing Near. 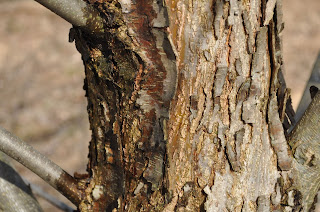 And finally, Naomi Oreskes collaborated on an essay that speculates from the perspective of the future as to why scientists, in the face of overwhelming statistical corrolation, declined to make the link between violent, extreme, unprecedented weather, and climate change from fuel emissions.  The parallels between that and the failure of foresters to make the direct link between ozone and tree death is explored at More Research is Needed...Not.
Posted by Gail Zawacki at 2:03 PM