Why is the tree dying? What's wrong with my plant?

Now that spring is well underway in the Northern hemisphere, a ray of false hope in the fading beauty of the glorious globe we inhabit, I notice there has been a torrent of searches slightly more than the usual trickle of searches that guide googlers to Wit's End, from using queries such as "why are the ash/oak/magnolia/maple/beech/apple trees dying?" or "why are my pepper leaves speckled?".

Rather than explain from scratch, I would refer new readers with such questions to the Basic Premise link at the top of the blog - or for a more recent iteration illustrated with pictures, this post, titled "Rude Awakening" and another with particularly good introductory links, here.

Regular readers are already familiar with the notion that the ability of foliage and needles to photosynthesize becomes impaired following exposure to background tropospheric ozone.  Air pollution is thus the underlying, often hidden cause for a universal and widespread rapid decline of vegetation, whether trees, shrubs or annual agricultural crops.  Damage generally mistaken as due to weather, drought, climate change - or diseases, fungal infection and insects - is thus frequently opportunistic, the so-called "sharks that smell blood in the water" as seen in the video at the end of this post.  But first, below is a hauntingly evocative photograph from the UK Guardian, of caterpillars in the Netherlands...a species historically in harmony with its host, the oak, but which has suddenly run rampant across Northern Europe.  This explosion of population is, like that of the bark beetle in the American and Canadian west, usually myopically attributed solely to rising temperatures from climate change rather than compromised immune functions due to volatile organic compounds traveling across the world, released from ever-increasing fossil and biofuel emissions: 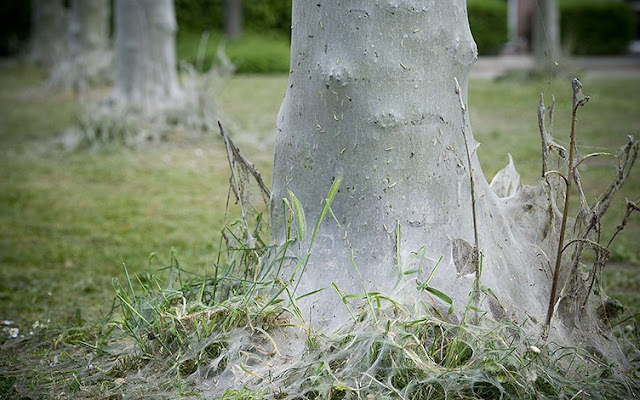 "Oak processionary caterpillars nest on an oak tree in Zoetermeer, the Netherlands. The insects, which eventually transform into moths, produce bristles that break off and become airborne. The bristles can provoke severe irritations such as itchy rashes or conjunctivitis and even respiratory problems. The nests, which can contain many thousands of individual caterpillars, are being increasingly found in northern Europe as temperatures rise due to climate change."