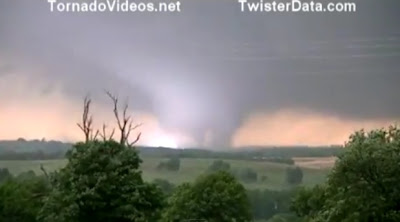 I came across a story in Vanity Fair about the Bugatti Veyron Grand Sport, at $2 million the fastest convertible in the world (electronically limited to slightly over 250 m.p.h. to protect the tires).  Actually, there are so many ongoing disasters, I scarcely know which to post - so this is as good as any.  The point here is that it is possible, in any random current photo or video which happens to incidentally include an image of trees (like the tornado above), to discern evidence of damage being done by toxic greenhouse gas emissions.  It is quite obvious to me, although people unfamiliar with the silent language of trees may need the translation that the bare branches above, and the sparse needles on these unhappy pines below are so thin, it means they are in irreversible decline - in other words...on the verge of death. 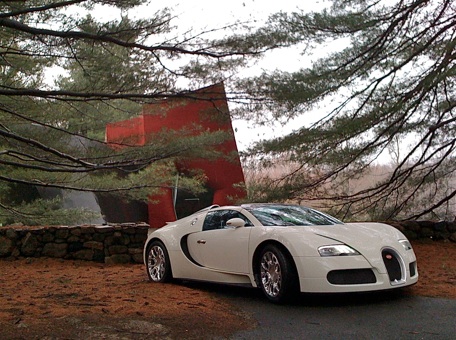 Naturally, such pictures are often drenched in the irony of extolling, say, a machine that burns through 8 miles per gallon, which consequently produces poisonous air pollution far in excess of what could conceivably be necessary solely for transport from one place to another and in fact, represents not merely denial, but defiance, of the catastrophic consequences rapidly overwhelming our climate and ecosystem.
With standards like this absurd vehicle for consumers to aspire to, is it any wonder that despite the worldwide economic recession, carbon emissions (and by extension, other by-products of burning fuel such as ozone) last year rose precipitously by a record amount, astonishing and terrifying the scientific community that had hoped we would achieve at least a temporary respite?  Apparently any reductions in the developed countries are more than offset by importing goods from the developing nations.  So, it was not to be, as reported by an article in the Guardian UK titled: "Worse ever carbon emissions leave climate on the brink."  The brink of what, one might well ask?  It "...means 2C target almost out of reach."
ALMOST?  It actually preserved that ludicrous caveat - what a joke!  It reached over 90 in New Jersey today, and it's not even June.  This is the sort of weather that was once reserved for the dog days of August, when everyone with a penny to spare fled for the cooler coastline.  And what in turn should be the expected consequence, for human and vegetative health, when we have increased heat episodes?  Oh, wait.  Higher temps = more ozone!


Oh well.  Here's a little video about ocean acidification off the Oregon Coast, which I include not only because it is a tremendously important topic, but because this precautionary tale should be applied - urgently - to the concurrent, broadly equivalent, "acidification" of the atmosphere that is killing trees, just as the corrosive waters of the ocean are killing shellfish and coral reefs - NOT in the distant future but right now.

"The researchers found surprisingly acidic water—corrosive enough to begin dissolving the shells and skeletal structures of some marine creatures—at relatively shallow depths all along the West Coast, from British Columbia to the tip of Baja California. Researchers hadn’t expected to see that extent of ocean acidification until the middle to the end of this century."