The New York Times actually ran an article about a video series exposing the outrageous activities of the billionaire Koch Brothers - who are a sinister force behind efforts to use think-tanks, professional lobbyists, lawyers, and outright political campaign donations bribes to control politics, information, and regulations...and also basically eviscerate the social safety nets that have been the foundation of the grandest aspects of American civil society.  This is just the first installment of more movies in production.  The video is embedded below.  Naturally as I watched it I kept a lookout for trees and sure enough, as the screen shots that follow make clear, even the richest won't be spared ecosystem collapse.  And then what good will their extravagant resource-gobbling dwellings do them?  Don't miss the UPDATE at the end! 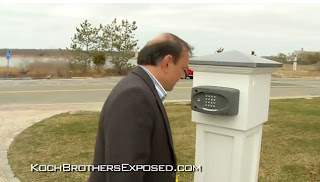 See the pine trees in the background?  They should be a solid wall of green, but thanks to exposure to toxic levels of air pollution, they are thin and dying.  Next check out the elegant tawdry hedge of boxwood leading to the gate.  Why, they are turning yellow!  And that tree on the left has stumpy branches.

Here's the comment I left at the NYT:
Ha! I am one of the sponsors. Here's the funny part...David Koch whined about the criticism and specifically called me, a middle-aged New Jersey house frau, "very, very extreme...and dangerous!" because I went to his conference at Rancho Mirage dressed up like a climate zombie with a banner I painted in my upstairs hallway, proclaiming the very factual observation "Koch Kills." How does Koch kill? By deliberately perpetuating the use of (profitable) dirty fuel that gives people cancer and damages trees.
Pictures of climate zombies here:http://witsendnj.blogspot.com/2011/03/koch-victims-vindicated-in-weekly....

The NYTimes ran this article and when I checked to see if my comment had gone through moderation, there were quite a few before mine in the queue, including mine as quoted.  Then, all the sudden, they all disappeared.

Here are screenshots from my sitemeter monitor:

First, the visit from the NYT admin to allow my comment through moderation, at 9:07 pm: 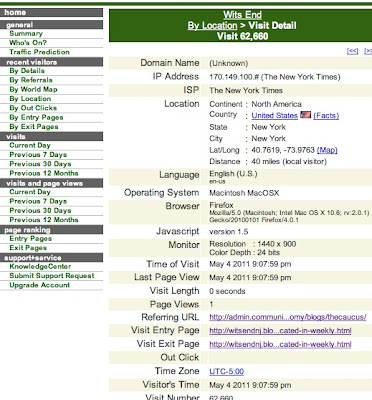 followed by a reader who clicked on my comment and arrived at Wit's End, at 9:29  - so obviously my comment was posted, if only briefly.  And since removed.  Along with many others.  This is just, creepy. 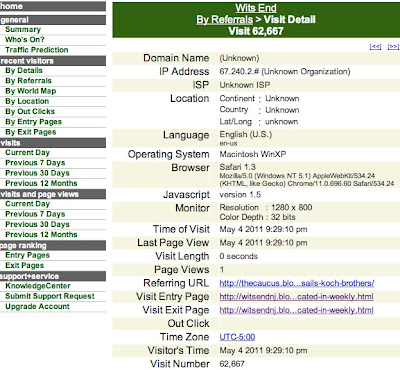