I have only limited time to post a few pictures from a nimbly quick flickr account of the action yesterday, when we shut down a mountaintop coal removal site in West Virginia.  I would have much preferred to take my own camera as the ekphrasis for my verbal impressions...but I was warned it was too risky that it would be lost thrown away or inadvertently damaged deliberately trashed had I been arrested.  For the moment I'll just add brief comments to these images I've borrowed, and hopefully later, I will find time to describe the intense, controversial, and chaotic training that preceded the action.  It's been an adventure, to say the least! 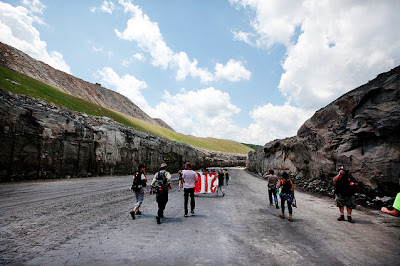 After hours in a tense caravan with several cat-and-mouse games with law enforcement surveillance, we surged deep up onto our secret site almost bewildered by the lack of any interference.  I was incredulous that, despite incessant helicopter inspection of our campsite, the plan to divert the police to another demonstration actually worked - our deployment seemed to have caught them and the mine owners by surprise. 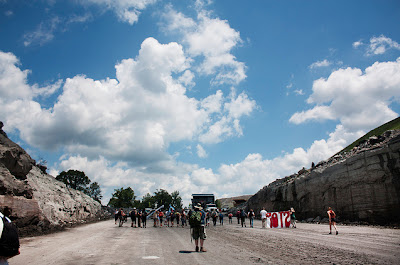 It was a crystalline afternoon, but even with a sunny breeze the incline was a slime of slick deep clay, wetted by trucks and treacherous to run on.  Our legs were all spattered with grey mud as we cautiously hurried up, slipping and sliding.  It's impossible to convey with words how vast the destruction is. 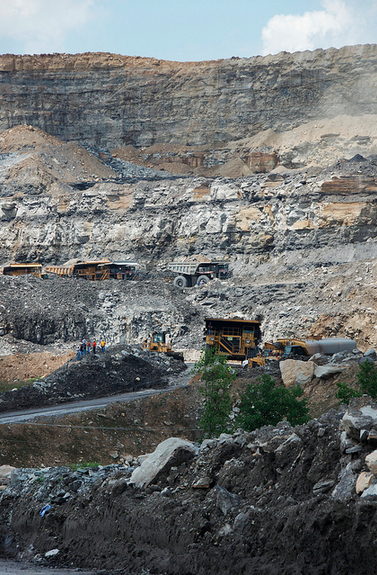 Do you see the tiny figures to the left of the road, above?  The machines are so large the scale is surreal. 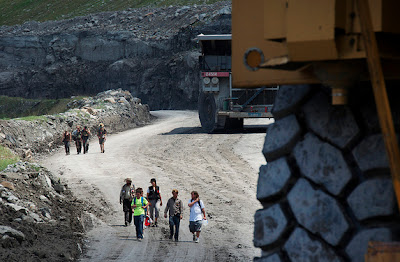 My job with two others was to unfurl a banner and alert the drivers that protesters were on the ground, since the cab is so high that the miners can't detect a mere puny human beneath them.  The entire operation is fraught with hazards, including explosives...being accosted by private security and the police are the least of the physical dangers. 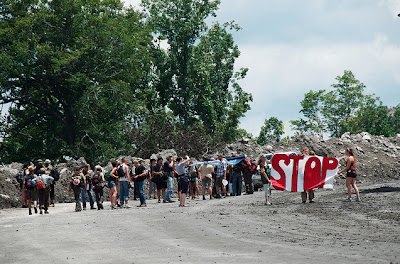 Once we were assured the equipment was stopped, the contingent who had prepared to lock down on the vehicle mounted the ladder with the complicated metal and plastic "jewelry" they had built in the late hours of the night, impediments that would require either hydraulic shears or more likely a buzz saw sizzling sparks, tediously wetted to separate them without scorching injury. 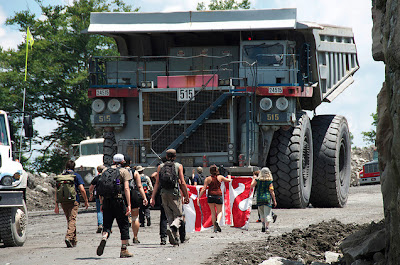 The goal was to stop work on the mine for as long as possible, so many of the participants refused to walk off when ordered, forcing the police to carry their limp bodies. 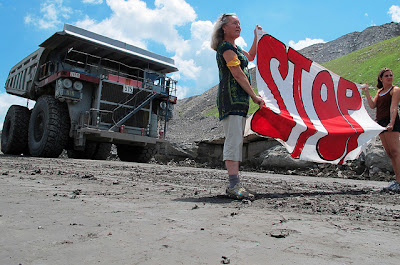 I was so nervous I chewed a hole in my lip. 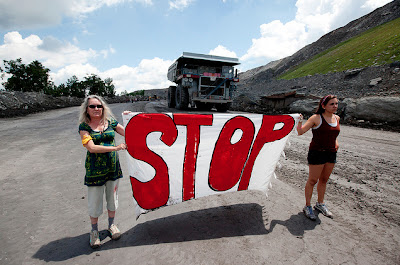 More banners were unfurled and we declared a victory, as the bravest among us remained chained  at the top tier of the machine. 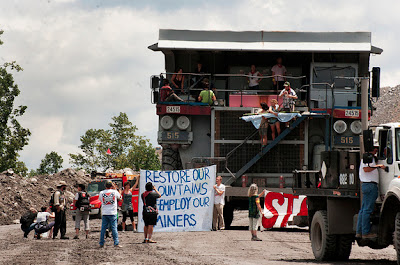 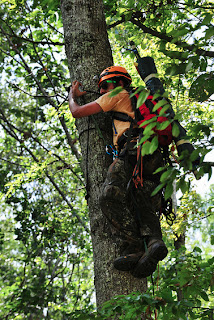 The RAMPS site has video and is maintaining updates.  It will take a day or two for me to convey my thoughts on topics ranging from the virulent, violent, prolonged, and profoundly frightening violent attacks from the "Coal is King" locals, to the negligence of the police in protecting peaceful marchers, to the merits and flaws of the organizational accomplishments of the mountaintop removal activists.  All that and, OH! what it feels like to not shower for several days!
Posted by Gail Zawacki at 6:50 PM