In a story picked up by media outlets around the country, Bloomberg led their report of a demonstration yesterday with this sentence:  "Protesters unfurled a “Koch Kills” banner and shouted “shame on you” as wealthy donors to presumptive Republican presidential nominee Mitt Romney rounded a corner in Range Rovers, Denalis and other luxury vehicles on their way to a fundraiser at the Southampton beach house of David Koch, an energy billionaire."

Yep!  That was yours truly, in my nicest Hamptons summer white linen. 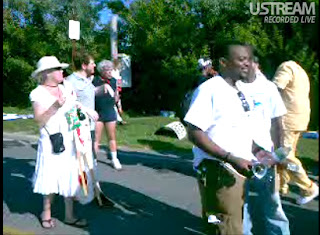 Now my feet are scraped raw because we walked about a mile down the beach to rally at the high-tide mark.  That's the banner, waaaaay in the back by the water. 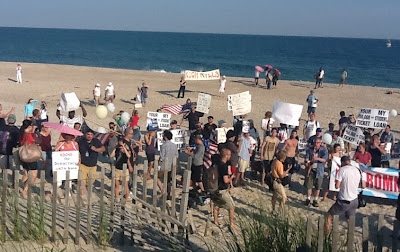 Here's a better picture from the first time it enraged David Koch, in Rancho Mirage, with fellow climate zombie, Mike Roddy.  If any interesting new video or pictures turn up online, I'll update. 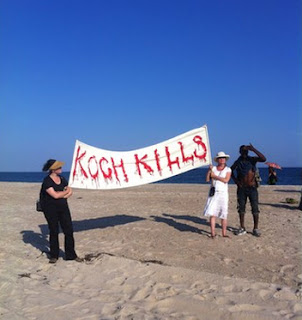 Did I forget to mention that the trees in Southampton are dying, with bare branches protruding above the thinning crowns - and the mansions hidden behind the classic high privet hedges that line the quiet streets are now visible through the transparent shrubs? 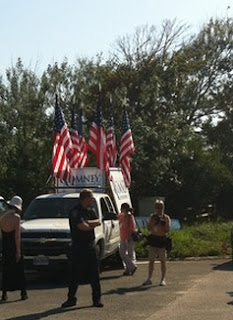 Everyone felt a bit richer after I handed out more of the Koch bucks, but still not quite enough to afford the $50,000 per person that was the requested "donation" from guests the 0.01% plutocrats at the event.

Here is the comment I left at the Forbes article:

I made the banner that says “Koch Kills”. That’s a serious charge, and it’s true. Koch Industries is one of the worst polluters on earth. The Koch brothers have devoted themselves to funding propaganda to perpetuate the idea that less government regulation is good. Government regulation is the only thing that will prevent them from profiting while the rest of us pay the real price of pollution. And the real price, for too many people of all ages, is death by cancer, emphysema, and heart disease. Research links even congenital heart defects to maternal exposure to air pollution.
The Koch brothers and other like-minded ideologues have done a superb job of hiding the fact that air pollution is far more significant than it used to be, with collaboration from the same ruthless exploiters who deliberately lied about the connection between tobacco and illness. The visible part of smog from sulphur dioxide has been reduced in the US, but the invisible part, the nitrogen dioxides that turn into tropospheric ozone, has not. The level of persistent, background ozone is inexorably increasing.
Another thing most people don’t realize is that, as toxic as ozone is to people, it is even more poisonous to vegetation. It’s common to hear the platitude that we should plant more trees – they absorb pollution, and clean the air. That’s true, but how often does anyone wonder, what happens to plants when they absorb ozone through their foliage?
They are all dying from air pollution, everywhere around the world. It’s pretty obvious actually, if you just look at them. Even around David Koch’s house in the Hamptons, their branches are thin and broken, their bark is falling off, they have cankers and holes like tumors, their leaves are small and burnt and shriveled. The same thing is happening around Steve and Christopher Forbes’ homes in Bedminster, NJ, but they probably haven’t noticed.
Naturally as we all know (unless we are obstinately in denial), the weather is violently more extreme because of climate change – but even more important in terms of lost power is that the TREES are different.
The first thing trees do when they absorb ozone is allocate more resources to repairing damage to the leaves or needles. This reduces energy sent to the roots. Shrunken root systems mean the trees are more likely to fall over and also are more vulnerable to drought, which is happening more because of climate change. To top it all off, they lose natural immunity to insects, disease and fungus.
The underlying reason the power is out after every storm, and wildfires are uncontrollable, is air pollution. Did you ever hear of so many trees falling on houses, cars, and people?
The USDA has also been trying for decades to develop crops that are genetically resistant to tropospheric ozone, with no luck, we are losing billions of dollars in yield and nutritive quality annually. Even if they could do it, what good would that do for the trees and other wild vegetation that are dying from absorbing air pollution?
People should realize without forests the ecosystem will collapse. We need to stop burning fuel and treating the air like an open sewer.
***************************

Below is a message from OccupyEverywhere that I saw on Facebook...and here I thought I was the lone voice with this message to climate activists: 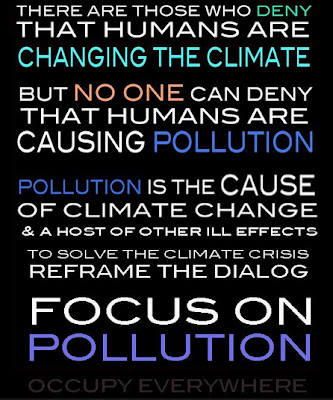 From Occupier Aaron Black, here's a list of men who are eagerly lining up to buy this "election" (and of course, Romney is not alone in buying votes - Obama has a list, too):

1) William Koch, Runs Oxbow Carbon, worth $4 Billion, Donation $2 Million to Romney’s Super PAC,
What He Wants: To pollute for free, Koch’s fortune is tied to some of the nation’s dirtiest industries

2) Harold Simmons (a Swift Boater and corporate raider), Traffics in Toxic Chemicals, worth $9.8 Billion, Donation $800,000 to Romney total giving $16.7 Million
What He Wants: Plans to store radioactive waste in Texas

3) Bob Perry, Owner of Perry Homes, Worth $600 Million, Donation $4 Million to Romney’s Super PAC
What He Wants: Tort reform to limit jury awards on homebuilders who do shoddy work

5) Richard & Bill Marriott, Heir to Marriott Hotel Fortune, Worth $3.3 Billion, Donation $2 Million
to Restore Our Future
What He Wants: A legal pool of foreign born workers to work in their hotels at slave labor rates - Romney served twice on the Marriott Board

7) Edward Conard, Ex Managing Director of Bain Capital, Worth $250 Million, Donation $1 Million to Restore Our Future
What He Wants: To screw taxpayers like Romney does with half the tax rates of others

10) Julian Robertson Jr., Hedge Fund Titan, worth $2.5 Billion, Donation $1.25 Million to Restore Our
Future
What He Wants: lower taxes for the Rich

12) Paul Singer, Hedge Fund Titan, Worth $1 Billion, Donation $1 Million to Romney’s Super PAC What He Wants: He Needs Fed backing in his lawsuit to collect $2 Billion from Argentina

13) Robert Mercer, CEO Renaissance Technologies, made $125 Million in 2011 alone, Donation $ 1 Million to Romney’s Super PAC
What He Wants: To squelch a proposed tax on stock options

17) Donald Trump, Casino Operator
Who knows what he wants??  He is just a delusional birther nut!

This is not a Democracy, that’s a hoax - it’s a Plutocracy
Posted by Gail Zawacki at 11:24 AM