A nest of robins in her hair...

I had been planning to join the Occupy Guitarmy on their march from Philadelphia back to New York, but went to the Koch protest instead.  I've been following their exploits however and was saddened but not surprised to see this picture of an encampment on a facebook page, no doubt an inadvertent commentary on the death of trees from air pollution: 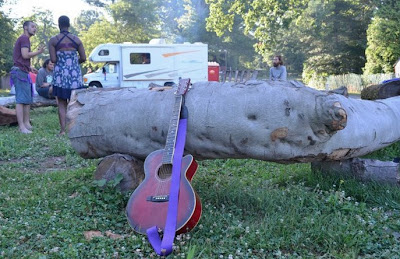 I thank Steven Earl Salmony, a good and respected friend I have met only in the cyber-kingdom, for sending me this video.  It has made me wonder whether perhaps one of my earliest memories - hearing my mother's voice reciting the first poem quoted - had something to do with my abiding love, awe, and respect for trees.  Oh and don't miss the obituary at 22billionenergyslaves, which is eloquent, and timeless.