The One Percent, Slumming It


Time for spoof!  Favorite line:  "Rubbish!  People want to see that they can be like us if they just work hard enough!"

Update:  This video has been removed by the user.  Damn it!  I don't know if that is funny, infuriating or scary.  It wasn't crude or anything like that.  The power of the 1% is absolute, I guess we should get used to our overlords.  The last couple of hundred years of freedom for some was simply an aberration and is over. 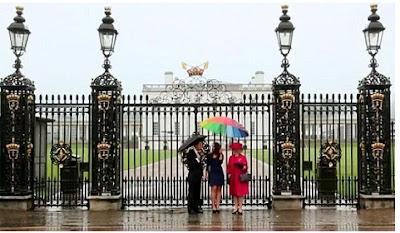 The video, which was created by the Chengdu Association for Cultural Exchange with Foreign Countries to promote tourism and “Panda Cabs” in the city Chengdu, shows Kate, Prince William, and Queen Elizabeth II (played by Colette Mularkey, Simon Watkinson, and Amanda Bellamy) standing out in the rain in London. William and Queen Elizabeth are trying to hail a cab while gold digger Kate Middleton complains that she didn’t marry into the royal family to be taking taxi cabs.
Middleton says:
“I just don’t understand why we cannot take the royal limo. I didn’t marry into royalty to schlep around in a taxi.”
William replies:
“But darling, granny is right. The commoners want to see us tightening our belts and all that.”
But Kate insists:
“Rubbish, people want to see that they can be like us if they just work hard.”
Which draws a mocking insult from the queen: ”Like you did?”
And in case you had any doubts about what the video was trying to portray, Middleton adds: “That’s right, I didn’t even fancy him at first. Don’t you remember? You had to practically beg me for my phone number.”
Several people criticized the ad for painting Kate Middleton as a gold digger but a spokesman for the Chengdu Association called the ad “harmless fun.” Still, the original video on Youtube has been removed (or at least set to private). Here’s a copy uploaded by World Viral News. But don’t be surprised if it gets taken down.