This amazing landslide occurred last May.  From a distance, the mountains look uniformly green, but closer views indicate there are completely dead trees in the woods.  In the screenshot below, in the center at the very bottom, and again at the top, are trees with no needles at all. 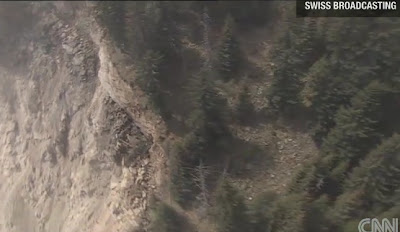 More bare trees are evident below, and there also appears to be little to nothing growing on the ground between the trees. 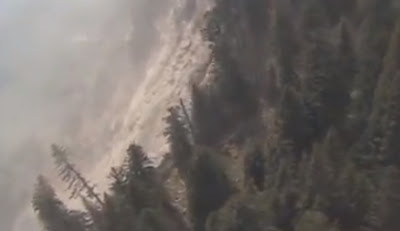 It has long been predicted here at Wit's End that, thanks to a wide-spread, global dieback of vegetation due to the inexorably increasing levels of toxic tropospheric ozone, certain peripheral consequences would result, aside from the obvious direct decline of forest habitat.  One is injuries and even deaths from falling trees and branches; and another, extended power outages, all of which we have certainly seen of late.  Chief among the catastrophic effects, and of even greater concern to humans and wildlife, is uncontrollable fires.  We are witnessing that horror, and more is yet to come.  The dry places are the first to burn, but it will spread more and more to places that are not in drought.

Check out this indispensable interactive map of wildfires linked to in comments by WindSpirit: 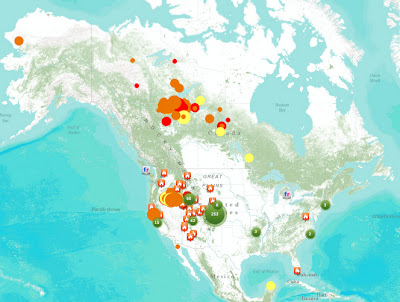 It can't be proven how much burning is from drought and heat versus how much can be attributed to plants dying from pollution.  Similarly, we can't know to what extent landslides should be blamed on ozone - but it is only to be expected that there will be more.

Remember, controlled fumigation experiments have proven that root systems of plants are damaged before any visible symptoms appear...and given that visible symptoms are now everywhere to be found (bare branches, thin crowns, splitting bark, injured foliage and needles) it's a safe bet that something sinister has been going on underground for quite some time.  Not only are impaired roots unable to anchor the earth in place, they aren't soaking up water and returning it to the atmosphere via evapotranspiration from leaves.  The ground becomes saturated more quickly when it rains, creating more run-off, and flooding.

Speaking of dirt, it turns out there is a new study just released from a long-term research project at the Duke FACE facility, which has determined that soil isn't sequestering the carbon they thought it would, and now they are shocked, shocked, shocked!

"Richard P. Phillips, lead author on the paper and an assistant professor of biology in the IU College of Arts and Sciences, said that after nearly two decades of research on forest ecosystem responses to global change, some of the uncertainty has been lifted about how forests are storing carbon in the wake of rising carbon dioxide levels."

"'It's been suggested that as trees take up more carbon dioxide from the atmosphere, a greater amount of carbon will go to roots and fungi to acquire nutrients, but our results show that little of this carbon accumulates in soil because the decomposition of root and fungal detritus is also increased,' he said." 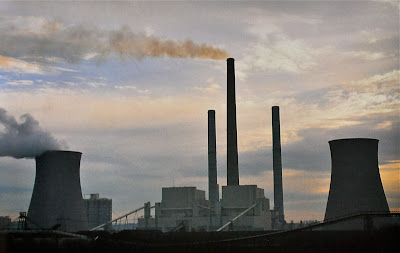 Well, since they only considered elevated CO2 in their study and did nothing to factor in the influence of ambient ozone - which has been detrimental for fifty years in the North Carolina mountains where the study was done, due to upwind coal power plants and other industrial facilities - I guess it's no wonder they conclude:

"The two-fold effects of microbial priming, where microbes are stimulated to decompose old soil organic matter via an increase in new carbon and other energy sources, and the faster turnover of recently fixed root and fungal carbon, are enough to explain the rapid carbon and nitrogen cycling that is occurring at the Duke Forest FACE site."

"'We call it the RAMP hypothesis -- Rhizo-Accelerated Mineralization and Priming -- and it states that root-induced changes in the rates of microbial processing of carbon and nitrogen are key mediators of long-term ecosystem responses to global change,' Phillips added."

They call it RAMP, and I call it ozone poisoning.  I think they forgot to read the definitive book on forest death from air pollution "An Appalachian Tragedy" (the source of that photo above), so let's leave them to their blinding CO2 obsession and get back to our fun topic for today, landslides.

From pursuing this line of inquiry I don't know whether to be gratified or dismayed that a google search reveals a quantity of reports of landslides that may eclipse even that of dying trees.  One from Jakarta had a photo of lichen that looks suspiciously familiar (not just in New Jersey and other places I've been, but also in the video From Florida). 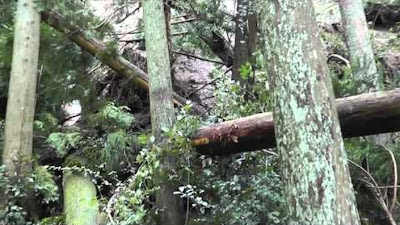 The lichen I attribute to the imbalance of nitrogen from pollution, which, if anyone recalls from the paper by Dr. Karen Rice that created a sensation (a sensation of terror) when first published and was then instantly forgotten, Acidification of the Earth, is also causing eutrophication of the water - leading to algae blooms like this particularly enchanting sample in China (oh, and consequent mass fish die-offs). 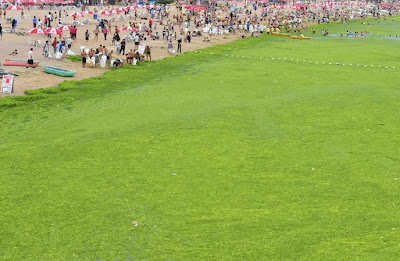 Lest anyone accuse me of unwarranted speculation (being a certified, card-carrying Ozonista), allow me to point out that it's already well known that the risk of landslide increases after other disturbances to vegetation, and so there's no reason not to include forest dieback from ozone as a predisposing factor.  According to a post at Climate Progress:

Interestingly, it was accompanied by this wildfire landscape from the author Michael Kodas, the largest tree of which just which happens to be quite dead. 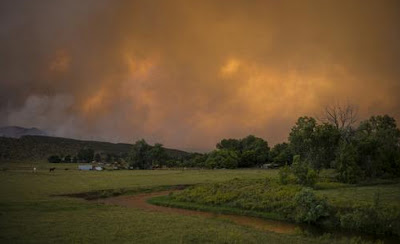 In a story from CNN about an enormous landslide in Uganda the disaster is of course associated with rain, but it also has this to say:


"Torrential downpours regularly cause landslides in the eastern part of the country, particularly in areas where heavy logging has left the land stripped of vegetation."

Since we ARE having unprecedented rainfall due to climate change - and our ever-expanding population builds on more precarious slopes - it will be almost impossible to allocate blame for mudslides like this one that just occurred in Japan on Thursday: 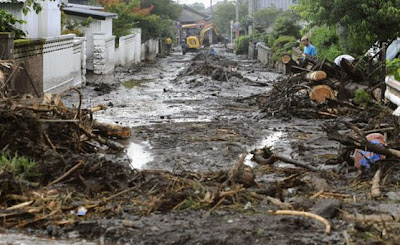 Whereas it's noted of the recent lethal landslide in Canada, "A slightly intriguing aspect of this event is that the weather at the time of the event is reported to have been sunny and warm..."  The source for that observation is, fascinatingly enough, an actual blog about landslides, called, The Landscape Blog.  It is maintained by Dave Petley, who is the Wilson Professor of Hazard and Risk in the Department of Geography at Durham University in the United Kingdom. Who would have thought!?  Every day brings new revelations...

The location of that dramatic slide in a remote area of Eastern British Columbia is indicated in the map, above.  Again, if you look carefully below at the foreground, it is possible to see in either of the two lower corners that there are standing dead trees in this forest.
Some news reports had photos of lower elevations and there, bare branches on the deciduous trees  are visible: 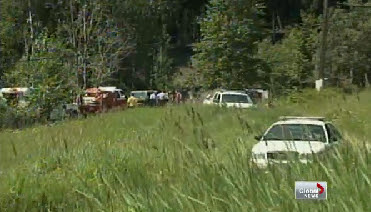 The end of the landslide is in the background of this photo, where the bare branches of a tall tree are plainly visible on the left - and nothing else looks particularly robust: 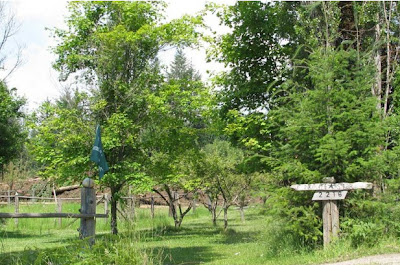 I'm looking forward to reading more at The Landslide Blog.  More research is needed!  Don't miss a new initiative for landslide reporting which been inaugurated, encouraging citizen participation, plus, there's even a regular conference.

The Landslide Blog collects a wealth of illustrations - maps, satellite images...and videos.  The forest debris swept away by the water in this one is enough to give pause:


The "...Zulg River, which runs right through the town of Steffisburg.  The dramatic footage was captured by an onlooker, showing large trees and parts of the river bank being swept downstream.
The river, which is known to swell quickly, rose an additional five metres yesterday afternoon due to the persistent rain."