Recent reader uploads of storm damage at Wunderground attribute tree damage to a microburst, in the first instance:
And a "possible" tornado in this photo, even though these trees are obviously so rotten it wouldn't have taken extraordinary wind to knock them over.

Why are they rotten on the inside?  Simple.  They are all being attacked by pathogens, because they are weak, from absorbing pollution.  I am working on my usual long, rambling post about ecosystem collapse but I had to take a break because today, I am very, very angry about the most recent "freak accident".  First, take a look at two prior recent "freak accidents".  A man camping in Quebec died when a tree fell on his tent on June 26.  Despite the fact that there was a storm at the time, witnesses emphasized that they did not experience a very strong storm and did not expect any trees to fall, let alone several.  I can't embed the video but I urge you to watch it at the link, because that fact comes through very clearly, more so than in the transcript which follows, when you hear them speak. 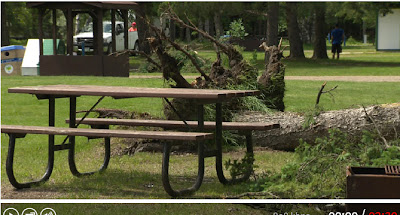 A 45-year-old Quebec man died early Wednesday morning when a tree fell on his tent at Falcon Beach, RCMP say.
Emergency personnel went to the Beach Campground just before 2 a.m. after the tree fell during the severe storm that hit Manitoba overnight.
The visible damage in the campground is almost unnoticeable with just eight to 10 trees downed, according to conservation officials.
But, in what officials calls a ‘one in a million’ type incident, one of the trees fell on a tent while two people, a husband and wife, were inside.
“We heard this terrible noise.” Said Elsie Loewen of Steinbach, who was camping nearby when a neighbour ran up in a panic.
“And she said ‘ there’s a man trapped. A tree has fallen on the tent and this woman cannot speak English, she’s French, and she said we need help’.”
The tree was too large to budge. Loewen called 911. Emergency crews arrived. After fire crews cut apart the tree in pieces small enough to lift off the Montreal man, he was taken to hospital and pronounced dead; his 44-year-old wife, also from Montreal, was treated for minor injuries.
“I’ve been with the department now for 25 years and I have never experienced this kind of an incident, nor heard of one.” said Geoffrey Smith, a Manitoba Conservation Officer at Falcon Lake District Office.
Environment Canada said its nearest weather office, in Sprague, MB, recording peak gusts overnight of 37 knots or 69 km/h. A meteorologist with the weather office, Natalie Hasell, told Global News that is generally not powerful enough to topple trees, unless they are already weakened or dead. It does not necessarily mean that extreme wind gusts were not present, however, according to Hasell.
Campers told Global News they did not realize a severe storm had passed through.
“And that’s why we were so surprised that this big tree was uprooted like that.” Said camper Gerry Klassen of Steinbach.
Conservation officials said what makes the incident even more unusual is the uprooted tree was young and healthy. But a nearby restaurateur of seven years in Falcon Lake Beach Campground said it’s not the first time he’s seen trees falling there due to powerful wind.
“No, that happens in campgrounds all the time when they don’t maintain them properly. I mean, the trees need to be cut down more.” said Michael Walker, co-owner of Bakery Bistro.
Officials said park and maintenance crews routinely eliminate risk before and all throughout the camping season.

Going back to this spring, a young girl was killed when a branch hit her in a "tragic freak accident" absent any storm at all.


Gabriela Hudak was a student at Hamden Middle School in Hamden, Conn. Teachers remember her as someone who 'always had a smile on her face.' 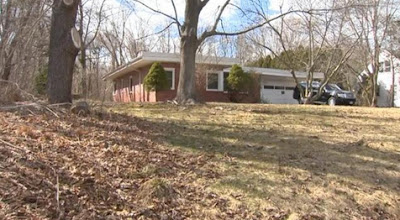 A small Connecticut town has been struck by tragedy after a 12-year-old girl was killed in a freak accident after a tree branch fell down in her own front yard.

Talented musician Gabriela Hudak was hit on the head on Mar. 29 and taken to hospital - but her injuries were so severe she died three days days later on Apr. 1.

I believe I already posted that a woman was seriously injured by a falling branch in Manhattan's Central Park early last month, only one of several incidents that occurred in the past few years having nothing to do with extreme wind.  Citizens often blame the Parks Department for negligence in pruning.  And this is why I am so very very angry today.  In this latest story, the assertion is once again made that the huge oak tree that fell AND KILLED A YOUNG STUDENT looked healthy.  There is only one reason for this.  The condition of trees - all trees, everywhere - is so degraded that specimens that would have been clearly designated hazardous just a few years ago are now regarded as normal.  The symptoms of trees in decline - cracking, peeling bark, holes, broken branches, thin crowns and damaged foliage - are UBIQUITOUS.

If the scientists and foresters had any brains or decency, they would find this phenomena absolutely remarkable and look for the fundamental explanation - the one environmental factor that all trees share in common - the composition of the atmosphere.  But instead they continue prevaricate and blather on about insects and disease and drought and temperature - variables that are insufficient to explain the utterly universal trend of premature mortality.  They also, if they weren't egomaniacal douchebags incapable of an original thought, might wonder why so many people are dying from falling trees when not so long ago that was so rare as to be virtually unheard of.

I admit, this particular "freak accident" which has left several people hospitalized in critical condition has me particularly upset because the victim who died was a student at UC Santa Cruz - where I went to college, and youngest daughter is now a Ph.D. candidate.  In fact I am steaming with fury.  Here's the article (which also has a video I can't embed) as forwarded by Wit's End reader Michele: 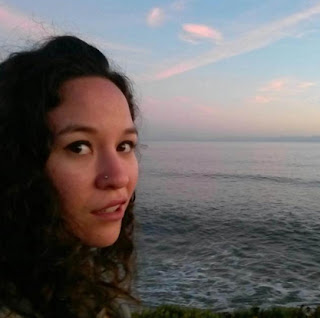 Four other adults were treated at hospitals after tree fell at Camp Towanga near Yosemite National Park. Pacific Gas & Electric Co. had recently inspected tree and found nothing wrong.

A LaGuardia High School graduate who loved nature was killed Wednesday when a giant tree fell on her at a Jewish summer camp near Yosemite National Park in California.

Annais Rittenberg, 21, a second-year counselor at Camp Towanga, was crushed by a tree that “spontaneously” toppled over onto a campfire circle outside the dining hall, said a spokesman for the Toulomne County Sheriff’s Department.

“She loved animals, she loved nature and she loved people. This is a girl who loved life,” Rittenberg’s heartbroken mother, Penny Kreitzer, said.

Kreitzer said that when she first heard of the accident, she hoped her daughter was safe. She spent hours calling the camp and a nearby hospital, finally getting through to an official at 1:15 p.m., only to be told the tragic news. 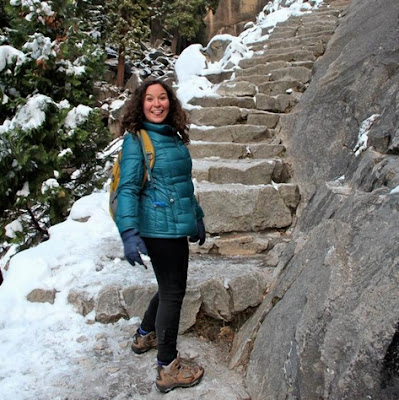 Annais Rittenberg is a student at the University of California in Santa Cruz.

Camp Executive Director Ken Kramarz said four other female camp counselors were injured, two had to be hospitalized. No children were hurt.

In a letter to parents, Kramarz called Rittenberg “a beloved member of the Camp Tawonga staff.”

Pacific Gas & Electric Co. was responsible for annual inspections of the oak tree because of the nearby power lines, according to The Associated Press. Tuolumne County sheriff’s spokesman Sgt. Jim Oliver said PG&E had inspected the tree and found nothing wrong with it, describing this incident as a “freak accident.”

Kreitzer said this was second year her daughter had been a counselor at the camp. She was in charge of teaching art. 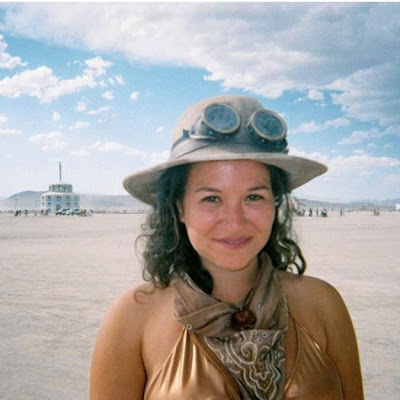 Born in California, Annais lived in New York with her parents, Kreitzer and Mark Rittenberg, for 10 years. She graduated from LaGuardia in 2010 and was a senior at the University of California, Santa Cruz, where she studied environmental conservation and hosted on-air shows for the campus radio station, KZSC.

As a teenager, Annais worked at a wildlife preserve in South Africa, tending to injured animals, and spent time in Soweto teaching kids art.

“I’ve lost a beautiful child through that tree,” Kreitzer said.
Posted by Gail Zawacki at 12:06 PM