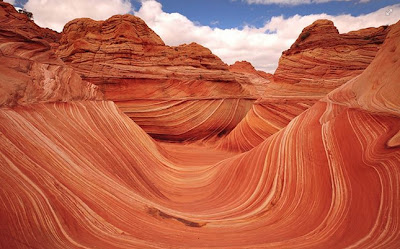 On Wednesday, an elderly couple (ages 70 and 69) won the lottery, restricted to 20 applicants daily, to hike to the famous rock formation in Arizona called The Wave.  In order to protect the remote site, there is only a 10% chance of gaining access - out of 48,000 people last year, there were 7,300 allowed to make the treck.

The pair were found dead the next day, the wife huddled under one of the few juniper trees.  Naturally, the news article blames the heat, which reached 106 degrees - but, typical for deaths attributed to heat, doesn't mention the level of air pollution.  This is what the AirNow site posted for Wednesday's air quality in Arizona. 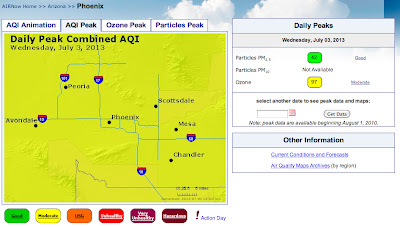 The level for ozone is a whopping 97 ppb - a mere 4 ppb shy of shading into the orange zone (101 - 150).  Below are the descriptions of the alert levels and keep in mind, like every other regulatory rule issued by US agencies, they are wholly inadequate to protect human health...and elderly = "sensitive".

Air quality is acceptable; however, for some pollutants there may be a moderate health concern for a very small number of people who are unusually sensitive to air pollution.

Members of sensitive groups may experience health effects. The general public is not likely to be affected.

Oh well.  Following are part of the comments and links I left this morning at Nature Bats Last, which, considered with the video that follows, explains why it hardly matters that ozone is killing not only people but trees as well:


If you want a really good, simple, gripping video explanation for your denier friends, try "Extreme Weather" from the Australian Broadcasting Commission.  Presuming you can persuade them to even watch it, if they're not rocking back and forth, sniveling with terror and and abject remorse by the end, then you can just count them as some sort of religious fundamentalists who will NEVER get it.

As usual, a commenter brought up the ubiquitous hydra-headed idea that if only it weren't for our culture derived from the ownership of land/growing of crops/corporations/detachment from nature/add your own, we would be able to live sustainably.  This time the proof was in the novel, Ishmael.  Sigh...I tried again:

The basic concept of Ishmael is fiction.

“…that mankind lived for a few million years as hunter gatherer (“leavers”), taking what was actually needed and leaving the rest. The past six thousand years, as agriculturalists, we have become (“takers”), taking everything whether needed or not, and destroying everything that we don’t recognize the need for in the process.”

Hunter-gatherers, contrary to popular belief, were not “leavers”. Typically, tribes went into population and then ecological overshoot, and warred with their neighbors. In fact they warred with their neighbors even when they weren’t in overshoot, raiding for women, just like apes. Hunter-gatherers swiftly drove the most easily obtainable, high protein edible species – megafauna, birds, shellfish – into extinction wherever they migrated with no more thought of what future generations would eat than our contemporary society exhibits.

This is all well-established in archaeological and fossil records, in first-contact historical tracts, and in observations of contemporary tribes who have not changed their ways such as the Yanomami. Most people prefer to think that the human capacity for empathy, cooperation and harmony with nature supersedes our tendency to be violent and greedy. So go ahead, anyone who feels better about it, pretend!

However, for those who take the time to actually read and learn, that vision unfortunately simply isn’t born out in the facts – facts like ancient weaponry, art, skeletons with physical trauma or signs of famine, mass graves, torture, cannibalism, defensive architecture, oral legends of warfare, protective armor and on and on (for instance the ongoing debate about the disappearance of the Neanderthals, whose genetic traces are still found today in Europeans and have recently been traced only to females, meaning – oops – raids and genocide) – really, a wealth of evidence that contradicts the idealized noble savage myth.

Since we are already doomed anyway by overshoot and climate change, it probably no longer matters. But it’s a dangerous fantasy, because it misplaces the cause of overshoot onto an external enemy – capitalism or corporatism or agriculture or stratified society – thus guaranteeing we will never recognize the enemy in the mirror. If we can’t confront the true source of our predicament, we absolutely guarantee we will never overcome it, mired in dreams of our better natures coming to the fore – as is perfectly demonstrated in Kevin Anderson’s otherwise remarkably realistic assessment (interview and links here).  He is the only climate scientist I know of who takes climate change as enough of an emergency and existential threat to openly call for researchers to stop flying in his post, Hypocrites in the air: should climate change academics lead by example? , and so I greatly admire him for that...but yeah, he too adds the hopium at the end.

The difference between the idealized hunter-gatherer lifestyle and capitalism is one of scale. HUGE scale, granted - take a look at this powerpoint presentation!


I received that link in email and below is a response to it that I also received, which I thought everyone would like to see.

"What is obvious to a disembodied observer, is painfully unacceptable to the embodied self with which we customarily identify.  40 years ago, during my visit to India, I ranted about the unfortunate appropriateness of massive nuclear warfare capabilities facing massive human population growth.  One of my Indian friends smiled kindly at me and asked, 'Now that you know God’s plan, what’s your problem?'"

And now to Sam Carana's wonderful video, Cruising for Methane, which he posted at the Arctic News website.  With his choice of music I can only guess at his state of mind as he created it, rather a sort of bemused meloncholy, a detached regret, I tend to imagine.