Another xenophobic article, this time from the Economist with the above title, once again blames the blighted UK forests on invasive species from Europe and beyond.  It's quite comical because at least in this instance it is finally admitted that spores travel across the Channel on the wind, meaning the virulent fungal attacks aren't due, as generally posited, to increased nursery trade and lax regulation.  Of course they still don't understand that pollution is the fundamental cause of tree decline, even though it's amply illustrated in the picture at the top of the story!  A truly staggering variety of trees are spectacularly failing - perhaps no more than here in the US, but the English are rabid gardeners and arborists by long tradition, and more likely to take note than the oblivious consumers that populate this country.  Below is my comment, followed by the text. 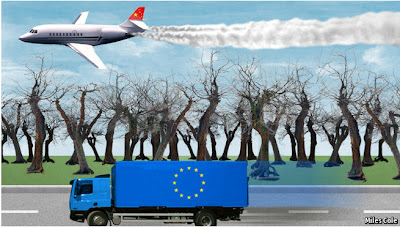 The picture illustrating the article is more accurate than the article itself. What actually underlies widespread premature mortality of trees is the toxic emissions from burning fuel.

The biotic pathogens, whether invasive or native fungus, insects and disease, are proliferating primarily because trees have weakened immunity to attacks. This result has been demonstrated in decades of scientific research investigating the damage done when plants absorb tropospheric ozone through their stomates, not to mention of course the poisoned rain and soil.

Here's the text of the article:

IN HIGH summer, it should be possible to wander freely through a stand of mature ash trees. Their rustling green boughs should form a dense canopy, blocking out the sun’s rays and making it hard for nettles and other weeds to grow below. But outside the Norfolk village of Cawston, sunlight is streaming through the wilted and partial canopy of a 20-acre ash wood; and the nettles are chest-high and nasty. Almost every other tree has leafless branches, streaked with necrotic lesions. Many are dead. According to Bagehot’s guide, Steve Scott of the Forestry Commission, “This whole plantation’s completely knackered.”

It is a sickening illustration of how fast ash dieback, C halara fraxinea, is attacking one of Britain’s most elegant, ubiquitous and commercially useful trees. Signs of the fungus, which has already infected and will probably kill over 90% of ash trees in continental Europe, were first noticed in British woods only eight months ago. This sparked an ugly row. Because Chalara was known to advance at around 30km (19 miles) a year, it was thought unlikely to leap the English Channel, which suggested that imported ash stocks—allowed into the country through lax regulation or shoddy customs—were to blame for the infestation.

A remarkable survey of British woods, carried out over a long weekend, put paid to that theory. The Chalara infection, it turned out, was far more advanced and widespread than anyone had imagined, and heavily concentrated on the east coast—all the way from Kent to Aberdeen. The Channel was no defence after all. The deadly spores were being blown across it.

Seven months later, as surging summer temperatures cause the fungus to multiply rapidly, the horrifying scale of the infestation is becoming plain. There is a small hope that unique British races of the species—isolated from continental Europe 8,500 years ago—may prove unusually resistant to the blight. But, if the stand at Cawston is any guide, the outlook for Britain’s 80m ash trees is dreadful, with manifold consequences. A fast-growing hardwood, ash is important for hedging and the fuel-wood and furniture industries. In upland woodlands, it is often the climax species. Losing it from the landscape would be as calamitous as the virtual eradication of Britain’s magnificent elms by another fungal blight, Dutch elm disease, in the 1970s.

Finger-pointing has turned to dismay. Many Britons are deeply attached to their trees—as the Tory-led government learned after it tried unsuccessfully to flog off the state-owned forest estate in 2010. The plan met with furious resistance. “In Britain’s conception of itself,” opined the Times, “the myth of the wooded island looms large. William Shakespeare put his fairies in the forests. It was forestry that sheltered Robin Hood from tyranny. Oaks built our navies, which sailed the globe.”

Such rousing sentiment is not completely ludicrous. Britain’s wet and warm climate makes it an unusually good place for trees to grow. Undisturbed by wars, its parklands house some fine specimens, especially of oaks. Yet, by European standards, Britain’s woods are unexceptional. Only 12% of Britain is covered by trees, around a quarter of the European average.

The forestry industry is small; few British farmers practise the small-scale forestry common in Sweden and Germany. Aside from a handful of ancient ash coppices, whichChalara may be about to see off, little remains of traditional British woodsmanship. The silviculture practised in Britain is essentially German. That British woods turn out, so far as ash dieback is concerned, to be extensions of continental ones is therefore appropriate. It is also consistent with a gripping history of arboreal blights.

The spread of such pests and pathogens is no more natural than a Sitka spruce thicket. It is synonymous with trade, which spreads infections as well as prosperity. Pathogens that are controlled in their natural habitats by co-evolved host species or predators cause havoc elsewhere. That is the case with Dutch elm disease and Chalara, both of which may have originated in Asia.
During the 19th century, as global trade increased exponentially, so did the incidence of tree blights. In the early 20th century, after rich countries instituted biosecurity regimes, the growth rates slowed, and in America, at least until recently, remained fairly linear. But in Europe, around 1960, the infection rate picked up, very likely due to the trade-boosting effect of economic integration. This not only spread diseases around the continent itself. It also made the law-abiding countries of northern Europe, such as Britain, susceptible to the sloppier customs regimes of the continent’s southern fringe.

Written in the trees
Global warming has probably made matters worse. In any event, over the past decade a new blight has been identified in Britain’s woods almost every year, with larch, pines, sweet chestnuts and oaks all affected. A short drive from Cawston, in the grounds of a splendid Jacobean mansion, Blickling Hall, by repute the most haunted house in Britain, 400-year-old oaks are dead and dying. Smudged with sappy lesions and peppered with tiny holes, their trunks show signs of acute oak decline, a syndrome associated with boring beetles and bacteria, but nonetheless mysterious.

There is, inevitably, a political dimension to these arboreal plagues. Eurosceptics are quick to blame them on cumbersome EU regulation, and they have a point. It takes longer for an EU member state to seal its borders to an infected product than it should. But where infections can be carried on the breeze that is no solution. To protect its woods, Britain needs to work far beyond them, by helping to improve border security across the EU.

That was one of the recommendations of a high-level task force, commissioned by Britain’s Eurosceptic environment secretary, Owen Paterson, to report on Britain’s endangered woods. It is also an approach that Britain should adopt more widely in its dealings with the EU, a source of both canker and wealth.
Posted by Gail Zawacki at 10:53 AM