Honey, Who Shrunk the Trees?

Once upon a time - long, long ago - there was a government program called NCLAN - the National Crop Loss Assessment Network.  This was an ongoing series of studies and experiments that investigated the impacts of air pollution on vegetation - almost exclusively from absorbing ozone, as that has by far the most impact.  You might think, since the background levels of ozone are inexorably rising, that such information would be even more relevant today.  But the results of the research apparently were so frightening, that the program was abandoned two decades ago, in 1987.  Here's a photograph from one published study, "Determining Crop Yield Losses from Air Pollutants" with its sinister caption: 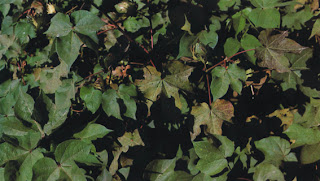 "Visible signs of pollutant injury to leaves of some crops are not a reliable measure of yield loss, because growth effects may occur in the absence of visible damage."
Jesus H. Christ!  You mean "growth effects" - diminished yield (size) and decreased nutritional quality - can happen BEFORE you can see damage to foliage?  Yikes...ALL foliage looked identically damaged this summer and fall - so for how long have "growth effects" been happening before now?

Amazingly enough, the New York Times reports that research indicates numerous species are literally shrinking, which is something that I have noticed is certainly true for the size of leaves, and flowers:

"...the shrinking among species in general is noticeable, Dr. Sheridan said — at least to scientists studying them. And in the long run, she suggests, changes in species sizes could have major implications for crop production and the availability of protein sources like fish.

Judging from the fossil record, creatures like beetles, spiders and pocket gophers shrank during periods of warming in the past like the Paleocene-Eocene Thermal Maximum about 55.8 million years ago, the researchers write. Scientists are increasingly relying on fossils to predict what the planet might anticipate over the next century.
Although climate change is now unfolding at a much faster rate than in past periods of warming, the researchers write, the basic message is the same: warmer temperatures equals smaller animals.
Yet the research community over all has been less than enthusiastic about embracing the idea. 'The scientific community is really hesitant to publish things that are potentially inflammatory,' said David Bickford, an evolutionary ecologist at the University of Singapore and a co-author of the paper. 'People don’t want to think that this is a new reality, everything shrinking.'” 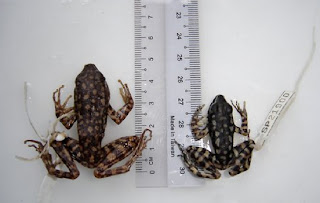 Whoooah!  That entire paragraph is worth repeating:
"Yet the research community over all has been less than enthusiastic about embracing the idea. “The scientific community is really hesitant to publish things that are potentially inflammatory,” said David Bickford, an evolutionary ecologist at the University of Singapore and a co-author of the paper. “People don’t want to think that this is a new reality, everything shrinking.'"
The article includes this prediction:
“'I don’t think that organisms will shrink to the degree that you’ll walk outside and see that trees are suddenly half the size that they used to be,' said Jennifer Sheridan, a conservation biologist at the University of Alabama and a co-author of a paper describing the phenomenon in Monday’s issue of the journal Nature Climate Change."

Maybe not.  Maybe they'll just be...gone!  Let's return to the USDA webpage that describes the NCLAN, which has been linked to here at Wit's End before, but deserves another visit.  All of the following in this font is taken verbatim from that page, as are the illustrations; my own added comments will be in blue.

Before we go one step further, a few critical points should be kept in mind when reading this.


1.  This long-term study focussed on annual agricultural crops, so when you consider that long-lived trees and other perennials are exposed to cumulative damage from ozone, season after season, you'd have to be an idiot not to understand that eventually, it's going to kill them.


2.  EVERY SINGLE LEAF now shows the symptoms pictured here, to one degree or another...and damage is done to trees BEFORE visual symptoms appear.


3.  What was that quote in the NYTimes?  Oh, yeah:  "The scientific community is really hesitant to publish things that are potentially inflammatory"  THAT is why practically nobody but me, certainly nobody in the "scientific community" is publicly connecting these dots...in case you wondered.

Tropospheric Ozone Pollution
Ozone is formed in the troposphere when sunlight causes complex photochemical reactions involving oxides of nitrogen (NOx), volatile organic hydrocarbons (VOC) and carbon monoxide that originate chiefly from gasoline engines and burning of other fossil fuels.  Woody vegetation is another major source of VOCs.  NOx and VOCs can be transported long distances by regional weather patterns before they react to create ozone in the atmosphere, where it can persist for several weeks.
Let's be clear.  The VOC from woody vegetation wouldn't be a problem (as Ronald Reagan famously claimed that air pollution is caused by trees), because it wouldn't chemically turn into ozone in the absence of NOx, which is only there because WE PUT IT THERE.  NOx emissions are currently referred to as a CASCADE, because they are out of control and there is no regulation of them whatsoever. 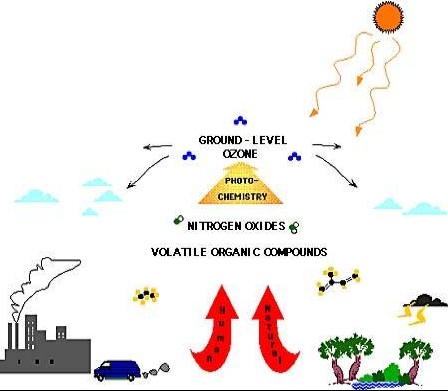 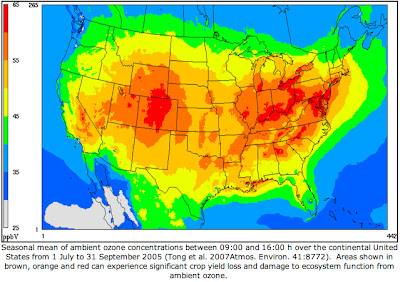 Notice the map above is dated 2005, so you can be sure the problem is now considerably worse.  The caption says, "Areas shown in brown orange and red [which corresponds to 50 to 65 ppbv] can experience significant crop yield loss and damage to ecosystem function [which refers to dying trees and the consequences therefrom I assume] from ambient ozone.  Keep in mind also, that even at levels lower than 50, plants are damaged, because the natural level of ozone they evolved to absorb is approximately, ZERO.


Also notice the high levels SMACK IN THE MIDDLE of the bark beetle epidemic.  Despite many studies indicating that insects, disease and fungus attacks are exacerbated when trees lose their natural defenses from absorbing ozone, certain foresters continue to deny that ozone is playing any role in the Rockies - even though the aspen are dying too, and bark beetles don't colonize aspen.


Ozone enters leaves through stomata during normal gas exchange.  As a strong oxidant, ozone (or secondary products resulting from oxidation by ozone such as reactive oxygen species) causes several types of symptoms including chlorosis and necrosis. It is almost impossible to tell whether foliar chlorosis or necrosis in the field is caused by ozone or normal senescence. [Unless of course the plant or tree is dying prematurely!] Several additional symptom types are commonly associated with ozone exposure, however.  These include flecks (tiny light-tan irregular spots less than 1 mm diameter), stipples (small darkly pigmented areas approximately 2-4 mm diameter), bronzing, and reddening. 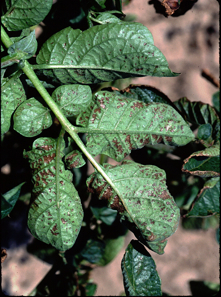 Ozone symptoms usually occur between the veins on the upper leaf surface of older and middle-aged leaves, but may also involve both leaf surfaces (bifacial) for some species. The type and severity of injury is dependent on several factors including duration and concentration of ozone exposure, weather conditions and plant genetics.  One or all of these symptoms can occur on some species under some conditions, and specific symptoms on one species can differ from symptoms on another. With continuing daily ozone exposure, classical symptoms (stippling, flecking, bronzing, and reddening) are gradually obscured by chlorosis and necrosis.  That gradual obscuring by chlorosis and necrosis is what is making leaves turn brown and fall off the trees early this fall, without ever turning glorious autumn colors. 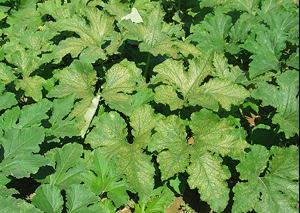 Studies in open-top field chambers have repeatedly verified that flecking,stippling, bronzing and reddening on plant leaves are classical responses to ambient levels of ozone. Plants grown in chambers receiving air filtered with activated charcoal (CF) to reduce ozone concentrations do not develop symptoms that occur on plants grown in nonfiltered air (NF) at ambient ozone concentrations. Foliar symptoms shown on this web site mainly occurred on plants exposed to ambient concentrations of ozone (either in NF chambers or in ambient air).

Field research to measure effects of seasonal exposure to ozone on crop yield has been in progress for more than 40 years. Most of this research utilized open-top field chambers in which growth conditions are similar to outside conditions. The most extensive research on crop loss was performed from 1980 to 1987 at five locations in the USA as part of the National Crop Loss Assessment Network (NCLAN).  At each location, numerous chambers were used to expose plants to ozone treatments spanning the range of concentrations that occur in different areas of the world.  The NCLAN focused on the most important agronomic crops nationally.  If you can stand the tin foil hats plainly in evidence, watch this video about farmers in Hawaii, whose plants are dying with symptoms just as described on this webpage...but they think it is from contrails. 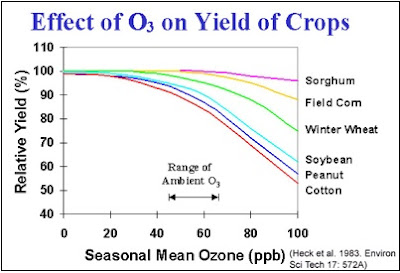 The strongest evidence for significant effects of ozone on crop yield comes from NCLAN studies (Heagle 1989).  The results show that dicot species (soybean, cotton and peanut) are more sensitive to yield loss caused by ozone than monocot species (sorghum, field corn and winter wheat).  That chart should be enough to make people really think about what is going to happen to our source of food if we continue to burn fuel, including biomass.

Finally, I will leave you with this link to an excellent exploration of climate change by, of all entities, MSNBC.  Don't miss the fantastic movies at the bottom.  I can't embed the video about trees, unfortunately, because it's fascinating.  The forester talks about how the trees normally can fight off the bark beetles but now can't - because they're old and/or unhealthy!  His exhibit says "Age and Stress take their toll".  What stress?  Of course, older trees have spent more time in polluted air.  Anyway, he doesn't even mention temperature!  Here's a screenshot - if I ever finish editing my film from California, you will be shocked to see that's not far from how it looks there...but the residents, of course, are oblivious. 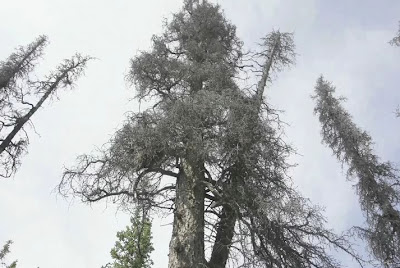