Compare this photo from last year, October 29, 2010.  I was so thrilled with this pond scene, because it was proving difficult to find vestiges of the sorts of glorious autumn foliage we used to expect. 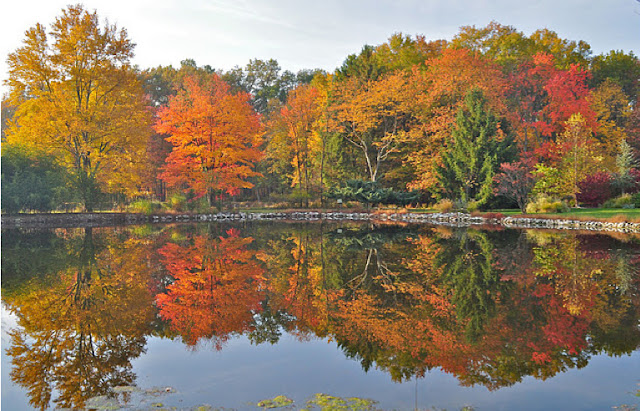 The view below was taken today, the 25th.  Aside from the diminished number of leaves and their muted color, the pond is turgid and full of scum.  It's not surprising then, to read of all the "unexplained" fish kills occurring around the world.  This is reactive nitrogen at work in the water, part of the Acidification of the World, a research paper mentioned in Monday's post.  The full pdf is on GoogleDocs here. 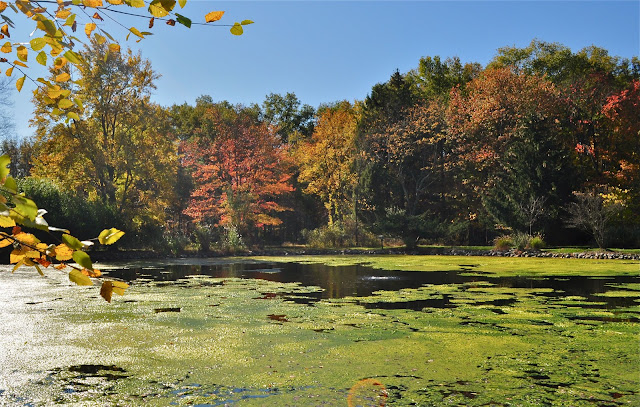 Here are a few excerpts (I had to take out some of the chemical formulas because blogger doesn't recognize the notations when copied) which read like an epitaph for Earth.  I italicized the parts that should be carved on the tombstone:
Emissions of SO2 and NOx in industrialized countries have been and will continue to be reduced, but not eliminated, region by region. Meanwhile, other parts of the world will continue to con- tribute to acidic atmospheric deposition, at a magnitude even larger than occurred during the 20th century. Thus, there is a ‘‘wave’’ of acidic atmospheric deposition-induced acidification moving across the landscape, leaving behind a ‘‘wake’’ of ecological damage that can linger for 2–6 decades (e.g., Cosby et al., 1985; Alewell et al., 2000), even centuries (Blake et al., 1999). Acidic atmospheric deposition is a common regional problem and will continue to be until Earth’s fossil-fuel resources have been depleted or until humankind develops alternate methods to produce sufficient energy for its ‘‘energy hungry’’ population.

Water in equilibrium with an unpolluted atmosphere containing CO2 and natural organic acids has a pH of about 5.66, which is slightly acidic. Atmospheric deposition with a pH of less than 5 is considered acidic atmospheric deposition, commonly referred to as acid rain (Drever, 1997). The primary cause of acid rain is emission of SO2 and NOx to the atmosphere during the combustion of fossil fuels. The S and N compounds undergo oxidation and hydration in the atmosphere in the reactions (Langmuir, 1997)
to form strong acids, H2SO4 and HNO3, which return to Earth  through ‘‘atmospheric deposition,’’ i.e., rain, snow, fog, cloud water, gases, as well as dry deposition. Schemenauer (1986) presents a summary of the pH of fog and cloud waters, measured at Earth’s surface and by aircraft at locations around the world, indicating that pH values range from 2.1 to 7.5. The higher pH values likely are influenced by the marine environment. Because cloud water/fog almost always has a lower pH than precipitation and is in contact with vegetation for greater lengths of time, it has the potential to do more harm to the terrestrial ecosystem than precipitation alone. One of the lowest fog–water pH values ever measured, 1.69, was in southern California (Schemenauer, 1986).
Deleterious effects of acid rain on plants, animals, and humans were observed as long ago as the middle of the 17th century in England, when the atmospheric transport of pollutants between England and France was recognized (Bricker and Rice, 1993). By increasing the height of chimneys, pollution was displaced down-wind of the source of emissions. The average height of industrial smokestacks in the USA has tripled since 1950 (Patrick et al., 1981). Comparable height increases in most industrialized countries in the 20th century has transformed acid rain from a local urban problem into one of global scale. Indeed, monitoring of wet-deposition chemistry during the 1980s and 1990s at remote locations indicates that even Mt. Fuji, Japan (Dokiya et al., 1995), the eastern shore of the Baltic Sea (Milukaite et al., 1995), and Torres del Paine National Park, Chile (Galloway et al., 1996) are affected by regional- to long-range transport of anthropogenic pollutants. Because the sources of atmospheric acids are widely distributed across the landscape, even the short atmospheric residence times of hours to days for the pollutants is adequate to support world-wide occurrence of acidic aerosols and compounds.