One of these days (maybe) people will be forced to reach the conclusion that trees and other plants are injured and dying from exposure to ozone pollution...and that consequently, the ecosystem is collapsing.  So far though, for most it is still possible to postpone that soul-crushing realization.

I could find the evidence all day!  I'm a bit pressed for time though, so quickly, here are three minor but indicative glimmerings:

1.  "Riddle of the Fallen Giant Sequoias - 245 foot Giants Come Crashing Down in National Forest!" from the Daily Mail:

Mystery:  Forest service officials are now trying to work out why the beasts fell

Standing up to 245 feet tall and with diameters of 18 feet, the sequoia is one of the hugest trees on the planet.


And when they come down, it's best that nothing gets in their way.


Happily, no visitors were in the Trail Of 100 Giants in Sequoia National Forest, in California, when two of the towering trees fell side by side.


A firefighter is dwarfed in pictures taken of the crash scene which show mighty root wads that are three times the size of him. 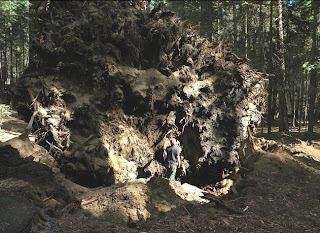 Mighty: A firefighter stands next to one of two fallen trees that temporarily closed the popular Trail of 100 Giants in Sequoia National Forest, California (Note:  Look carefully to see the firefighter) 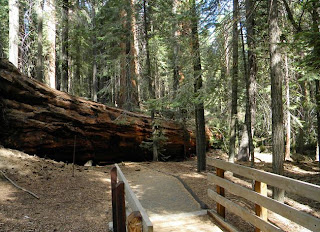 The Forest Service has been forced to close the trail after the downed monsters (monsters?) were spotted for the first time.


Officials are still working to determine the ages of the trees and why they fell. 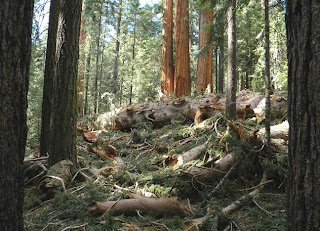 Clearly there is no way the tourist spot can be reopened with even the remote possibility that another of the trees will come down.
2.  And now for that "freak accident":


A 52-year-old resident of Chicago's Streeterville neighborhood has died in a freak accident on a New Buffalo golf course.
The Berrien County sheriff’s office said the victim was walking between the course’s first and second holes about 8:30 a.m. Friday when a large tree toppled and struck his head.
His body was found by other club members at the Dunes Club and Golf Course, about 100 miles southwest of Grand Rapids.
3.  Of course, I am following the spread of Occupy Wall Street events across the nation, and so I came across a youtube of Occupy Kansas City.   Following are some screen shots from their video, which was uploaded September 30 and is embedded below.  The trees are losing their leaves ahead of turning fall color there too...just imagine! 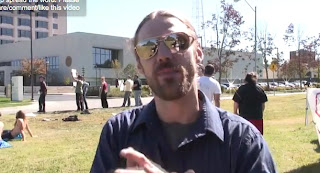 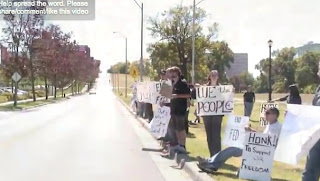 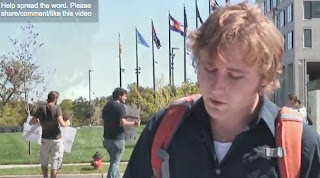 There are lots more dying trees in the background of the video, which is kind of fun to watch anyway.  Don't forget to follow the livestream of today's march in NYC, which is going to be HUGE!  OccupyTogether has links to demonstrations in other locations.
Posted by Gail Zawacki at 12:28 PM