Bioremediation of Acid Earth - a Farce in Three Acts (Air, Water and Soil)

Remember that word - bioremediation - because it will be encountered towards the end of this post.  It refers to the preposterous notion that Nature can be further exploited to clean itself of the filth that humans have created.  It's reminiscent of the fairytale that plants are good because they absorb ozone, and we should therefore plant more trees...without ever asking, what happens to the leaves that absorb air pollution?  That's about as clever as observing that human lungs are wonderful, because they absorb ozone too!  Never mind that it causes cancer and heart disease...

This study, one of the few I can find that investigates emissions of biofuels (which I suspect is causing the recently accelerating and widespread tree decline), is titled "Fuel Properties and Nitrogen Oxide Levels of Biodiesel Produced from Animal Fats".  Published in 2005 and funded by the USDA, it compares the emissions of NOx from burning soy-based and various animal fat-based biofuels, concluding that animal fats have potential to release less NOx than vegetable-based biofuels.  Why might this matter?

Note, that the two studies upon which that first statement is based were published in 1998 and 1994 - so our government has known - and ignored, while pushing for mandated use - for years that biofuels increase emissions of NOx.  What does "negatively impact the use" mean?  "even this relatively small increase in NOx can negatively impact the use of biodiesel."


I think it means, that biodiesel shouldn't be used because it increases NOx, and even a "relatively small increase" in NOx is enough reason NOT TO USE biodiesel!  Just how bad is NOx?

One study, published in 2005 in the Journal of Geophysical Research by scientists from Harvard, uses satellite data to look at the ozone resulting from burning biomass, and states at the outset, in the introduction:


Nitrogen oxide radicals (NOx = �NO + NO2) originating from combustion, lightning, and soils largely control tropospheric ozone production [Kasibhatla et al., 1991; Penner et al., 1991; Murphy et al., 1993; Jacob et al., 1996]. Tropospheric ozone plays a key role in determining the oxidizing power of the atmosphere, is an important greenhouse gas, and is toxic to biota.
Oh my, toxic to biota??  All the collective living flora and fauna?  So how come I got raked over the coals at Real Climate for saying ozone is toxic to life?


Even the biodiesel industry's own website admits that NOx admissions increase, which they then attempt to hedge with some completely hypothetical technological mitigations that aren't being employed:

They base their estimates on an EPA document, a "Comprehensive Analysis of Biodiesel Impacts on Exhaust Emissions" which, while predicting a net loss in efficiency (how's that cleaner energy?), also includes the following chart red-lining NOx emissions - and, parenthetically, this comical caveat: 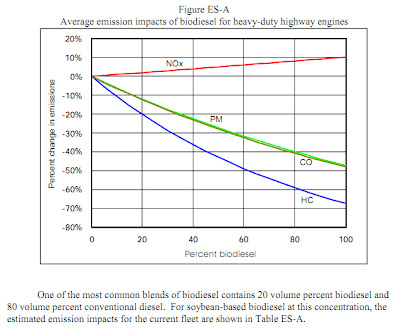 But getting back to reactive nitrogen, The Bangor Daily News reports that up in Maine, they already have what shellfish harvesters call "Dead Mud".  Following is the article, which begins with CO2 acidification, and then moves on to NOx - that other, "biggest environmental disaster you've never heard of": 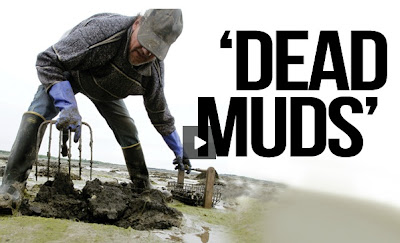 “There may be controversy surrounding global warming, but there’s no debate about the fact that the ocean is becoming more acidic,” said Paul Dobbins, former oyster farmer and co-founder of the Portland-based kelp grower Ocean Approved LLC. “It doesn’t receive all that much coverage, because it’s not controversial, but [the ocean's acidity is] what has all of us who are working with ocean organisms and shellfish worried.”

Casco Baykeeper Joe Payne said the pH of coastal ocean waters has decreased by 0.02 over the past few decades.
“I’ve had people say to me, ‘Well, that’s just .02, that’s tiny,’” Payne said. “Your blood and seawater are 98 percent the same. If your blood pH changed by .02, you’d be comatose. That’s what it does to the ocean.”
What Payne described as a “major problem” in the form of worldwide ocean acidification, though, isn’t the only problem for Maine’s shellfish flats.

There are no limits now on how much nitrogen can be discharged into Maine waterways.
“If you have a very productive ecosystem, which the Gulf of Maine is, and you add a little nitrogen, it gets even more productive,” said Salisbury.
The environmental advocacy group Friends of Casco Bay, to which Payne belongs, has launched a campaign urging Mainers to keep an eye out for “green slime” — thick carpets of algae covering shallow coastal waters. The green slime is a sign of excess nitrogen, Friends of Casco Bay warns, and excess nitrogen carries a host of consequences for an ecosystem aside from bad aesthetics.
The same nitrogen that causes a freakish bloom in algae causes an explosion in the microscopic phytoplankton populations. Those massive numbers of phytoplankton then die, fall to the mud at the base of the water and decompose, releasing more concentrated carbon dioxide to the fragile mud ecosystem and driving the pH further into acidic territory.
“Only now are we considering the effects on shelled organisms,” Salisbury said. “This is a big concern, and it’s only recently been studied. People have always known about the chemistry, but the effects on the organisms [are just being researched].
“There may be adaptations that some organisms can make, but we do know that things are changing probably faster than most organisms can keep up with,” he continued. “It could be that these factors are conspiring to make survival difficult for commercially valuable shellfish, but really the jury is out.”

A 2008 resolution of the Legislature, promoted by Friends of Casco Bay, directed the Maine Department of Environmental Protection to develop limits for the amount of nitrogen allowable in Maine waters.
Angela DuBois, who works in the department’s Bureau of Land and Water Quality, is in charge of drafting those numeric limits in time to meet a July 2012 deadline, after which the Legislature will review and consider implementing them.
DuBois said setting those limits is “the first step” in a longer process to control nitrogen pollution. When the numbers are set, the DEP will try to maintain them by regulating the amount of nitrogen discharged by identifiable sources, such as sewage treatment plants.
The department also has programs set up to educate the public about controlling “nonpoint sources” of nitrogen pollution, such as residential and farm fertilizers and road runoff. But DuBois acknowledged the nonpoint sources will be “more difficult” to control.
That could leave dischargers such as factories or sewage treatment plants shouldering much of the burden of curbing nitrogen levels.
“Plants our size are looking at [$500,000 to $750,000] to build tertiary treatment chains,” said Christopher Higgins, head of the Boothbay Harbor Sewer District. “That’s going to make an impact on sewer fees, especially when [the cost is spread out] over 1,200 users.”
For his part, Higgins is partnering with Dobbins to experiment using kelp to control nitrogen. The saltwater vegetation absorbs nitrogen from the water, and Higgins has a Department of Marine Resources permit for two kelp beds, one near the the district’s primary treatment plant and another near Bayville.
“A nice benefit of this is that kelp eats nitrogen, and there are places on the Maine coast where there’s excess nitrogen because of runoff and other pollution,” Dobbins said of the sea plant, which is popular in many parts of the world as a food and fuel source. “He’s looking to use nature to take excess nitrogen out of the water — it’s called ‘bioremediation,’ using nature to help clean itself.”

As usual, both of these videos conclude with a token happy "there is a solution" ending, which, whether wedge reductions or bioremediation, is entirely unfounded in reality (since emissions AND population are rising with no reduction in sight) and far out of scale with the scope of the problems they describe.  One paper, newly released by two researchers from the University of Virginia, which assesses the sources and impacts of anthropogenic emissions leading to the global degradation of air, water and soil, calls the results, "Acidification of Earth".  We are starting to understand.

Every now and then it's possible to find a more realistic assessment of how this will be resolved.  Following is background commentary by the creators about their South Park episode "Smug Alert", the full hilarious episode of which can be seen by clicking at that link to South Park Studios.