I shall be sorely grieved when the inevitable occurs and the publicity vortex subsides forever.  News Corpse had the most lucid analysis as to why we can expect to lose her when she can no longer pretend to be a presidential contender, which will be a tragic loss.  For so long, her trashy antics epitomized what galgenhumor can be gleaned from the deepening murk of our failing capitalist empire.  In another post at that blog, this fabulous derision is to be found:

One doesn’t need a Harvard Law degree to figure this out!

Oh, doesn’t one? How about a Harvard Economics degree? Palin seems to think that the legal curriculum is the path to financial expertise. Her dig at Obama’s education is kind of like saying that one doesn’t need a degree in architecture to figure out marine biology. Technically, it’s true. There is a Dadaist elegance to her pseudo-logic....And by the way, Obama, who graduated from Harvard Magna Cum Laude, minored in economics."
So, let's enjoy while we can, and cling to the hope that the preposterous dementia of Michele Bachman will be a worthy replacement for our macabre scorn.  She's certainly as contemptible!

The Daily Show
Get More: Daily Show Full Episodes,Political Humor & Satire Blog,The Daily Show on Facebook
Now, just so's we don't forget that this blog is mostly about trees fatally damaged from exposure to toxic air pollution, a funny thing happened when I was looking at the online video - which is that I had to watch a couple of Allstate insurance advertisements and surprise, surprise, in the background were...dying trees!  Following are screenshots: 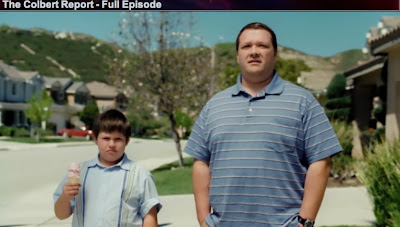 The tree behind the pair above has almost no leaves, as is the condition of those behind the motorcyclist below.  This illustrates two important things, neither or which are new, but are worth repeating.  One is, that trees are dying so universally from inexorably rising levels of tropospheric ozone that obvious, incontrovertible evidence can be found everywhere. 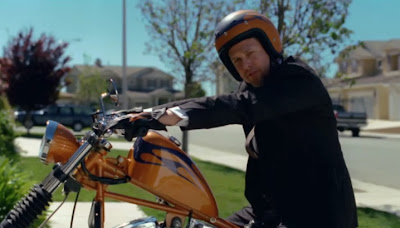 The second thing is, people are becoming so inured to visible decay - like the director of these ads - that they don't even notice the extreme abnormality these symptoms of decline represent.  Below, the motorcycle has crashed and you can see that the two trees on the right, at the far end of the block, are also dying, as are the shrubs on the far left in the foreground. 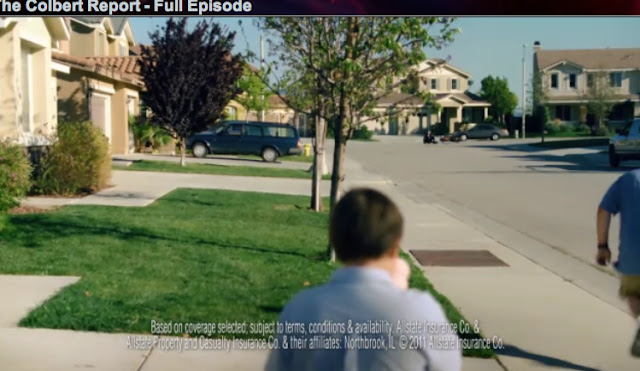 This ad is for homeowner's insurance, warning of raccoons in the attic.  The trees in front of this house are dying too.  It is as though we are all passing through a barren dreamscape of death, oblivious to the stench of cadavers decomposing all around us. 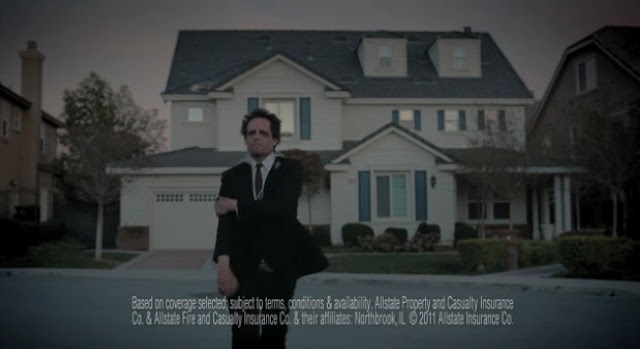