You Too can be "Rich and Successful" in a Mass Die-Off! by Tim Murray

A Sequel to Still Positive After All These Years! 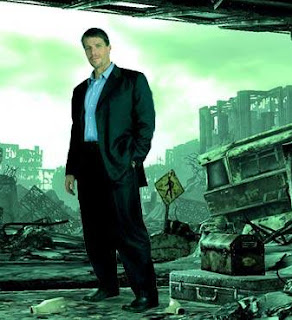 Tony Robbins’ message of hope is just as relevant now in 2025 as it was then in the days of phoney debt-fuelled, energy-cheap prosperity, when as a young man he taught a generation of Americans how to exploit their inner strength and climb the ladder of success “one little bit at a time”.  It was a message that found resonance among environmentalists who were led to believe, as Al Gore promised them, that the sum total of each “little” lifestyle change would add up to societal sustainability. Well, Tony’s outward appearance (below) may have taken a beating from the collapse, but not his indomitable confidence in the power of positive thinking.  He has now updated his original approach to match the mood of the new, emaciated, post-digital generation of scavengers who scrape and scramble for what little sustenance our post-carbon age can offer.
Now New Society Publishers is pleased to announce the release of Tony’s new book:
“Be Rich and Successful In Our Extinction Event”
Be sure to pre-order your copy before  stocks run out!
This is a book that could well change your short, desperate and miserable life!
Maniacal  Positivity In The Teeth of Nuclear, Biological, Chemical and Ecological Desolation!
The Post-Apocalyptic  Never-Say-Die Tony Robbins of 2025 (above)
Those of us who survived the apocalypse and have dim memories of better days in the Age of Exuberance may recall the motivational gospel of the vibrant Tony Robbins, the motivational speaker who assured us, to refer to his website of 2011, that we could achieve financial abundance independent of any hostile environment by focusing on our inner potential. By establishing an “invincible psychology” that focuses on what we can do rather than would we can’t, we can develop a “precise” plan to succeed in finance and business, “a plan that allows you not only to survive any changes in the economy, but prosper regardless of the external environment.”  Well, Tony’s words were true then--- before the collapse--- and they are still true today even amidst the rubble of war, ecocide and ruin. If you are not convinced, then read what Tony has to say now, some 15 years later. Read his new best-seller, “Be Rich and Successful In Our Extinction Event”, available now from New Society Publishers of Gabriola Island, British Columbia.
As we state on their home page http://dev.newsociety.com  ,  NSP publishes books that are “tools to build the new society”, books that offer “inspiration for the daily struggle, and “practical tools to change the world.” If all you have is an air-tight analysis resting on an impeccably solid empirical foundation of math and logic leading to the inescapable conclusion that we’re fucked---- sorry, but we’re not interested. The facts must not be allowed to impede our mission---- which is to raise morale and rally the troops toward the achievement of a New Society!  So what if oil and the 69 non-renewable resources which our industrial economy  was critically dependent upon are never going to be affordably accessible again?   So what if the notion that we can find substitutes is a cornucopian pipe-dream too far-fetched even for science fiction? So what if only a fraction of us can survive on renewables? So what if we are dying in our billions! We are going to relocalize to harmonious rural collectives who celebrate community and family values and a higher quality of life on 700 calories a day---  finally rid of the vices of greed, competition, hierarchy and patriarchy that drove the hateful capitalist system that once enslaved us.  Forget Mad Max, think Woodstock! “All ya need is love, love---love is all you really need.”
New Society Publishers welcomes doomsday books that have a happy Hollywood ending.  If you have written the draft of a book which says that "Growth Must End", “Capitalism Must Go”, or “Rich People Must Quit Consuming So Much” or demonstrated that this civilization is not sustainable, please send in the manuscript, but be sure to leave readers with false hope! Be sure to connect all the dots except the last one! NSP does not do science. We are not interested in the brutal, unvarnished truth. Our mission is to motivate readers to work toward that New Jersualem  which your analysis indicates is impossible. So your conclusion must not follow from the body of your text but from your unsubstantiated metaphysical convictions! We are a “solutions-oriented” publishing house.  If you haven’t got a solution, if you conclude that civilization can’t be fixed, then please, STFU.
As you know, the real purpose of environmentalism is to Feel Good About Yourself! That is the point of the exercise.  And only the belief in a POSITIVE outcome can generate those POSITIVE FEELINGS that even while they won’t actually change the laws of physics and eliminate the scarcity that is killing us, will nonetheless generate the ENDORPHINS which we are all looking for!
Now sing after me, “Give me that old time religion, give me that old time religion, give me that old time religion, it ‘s good enough for me! If it was good enough for Rob Hopkins, if it was good enough Amory Lovins, if it was good enough for Carl Pope then it is good enough for me.....”
Elmer Gantry
Marketing, NSP
August 7, 2025
Tim Murray is an environmental writer in British Columbia. He can be reached at
gloomndoom@telus.net    falsehope@telus.net  or luddite1@telus.net
Posted by Gail Zawacki at 5:00 PM