At least two similar stories I have seen on the news this past year - one, a jogger in Philadelphia and another, an entire family in a car on the Garden State Parkway. We can expect much more, especially when we get a strong storm.
Here is the text that accompanied this video, which ends with this sentence: "Police said it appears that strong wind conditions caused the tree to fall and they do not expect to press any criminal charges."
Now this is really wrong. First of all, they say the tree was rotted. So it's not the wind - it's the rot - and the cause of the rot. Second, we SHOULD be pressing criminal changes, against the coal, oil and ethanol lobbies, and the elected officials who take their money and sell out our children's future. Okay and all the drill baby drill Republicans who are obstructing clean energy legislation too.
And then, there is an absolutely riveting account in this story, from the Boston Globe, about scientists trying to figure out why so many oaks and pines are dying on Cape Cod and Martha's Vineyard. I don't think they've got the causative agent right, but at least they are noticing that trees are dying. Soon the story of mass tree extinction will be huge and as the implications start to sink in, then it will be very interesting to see how people react. Probably not particularly graciously, is my prediction.
Many many thanks to friends Nancy and Susan in Massachusetts for sending me tips and encouragement!

Anyone remember the story about Sudden Aspen Death? This photo, from here, depicts aspen leaves. Look familiar?
So let's see...we've got wholesale death of: Aspens in the Rockies, Pines from the pine bark beetle out West, Sudden Oak Death syndrome in California, a little problem with birch in New Hampshire, Dead pines and oaks on Cape Cod and Martha's Vineyard, and everything dead or dying in New Jersey. Hmmm....what do you suppose those trees might have in common? Maybe...air???
Sunday, November 1st, I decided to head for the hills for pictures, and take some panoramic views of the fields and woods. But on the way out, I had to take some more pictures of the Japanese Maple. 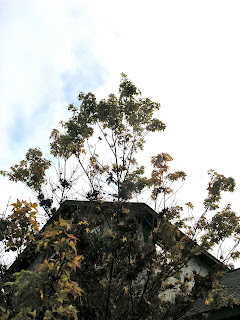 I've written before that this tree and many others exhibit a bizarre pattern of older foliage turning color and falling off, and the newer leaves hanging on to their color and their branches. This can be clearly seen in this silhouette. This photo was taken October 29, just four days earlier than the current series - as was the picture below where you can see the difference between the light green leaves and the browned older, inner layers. 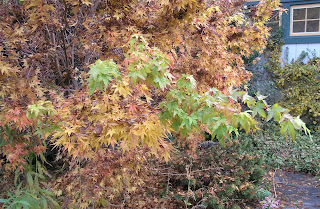 Now look at the difference in 4 days! Those inner layers have completely shriveled up. 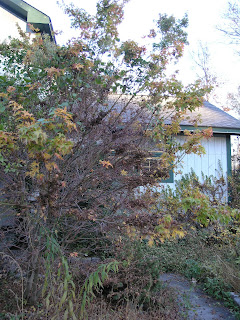 But the more recent leaves are still green. 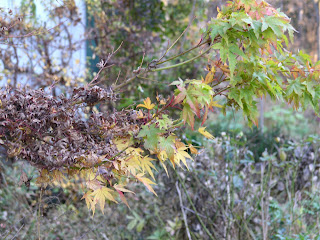 So the hideously shriveled older leaves, seen at the bottom of this picture, aren't in this condition from frost, or the time of year. 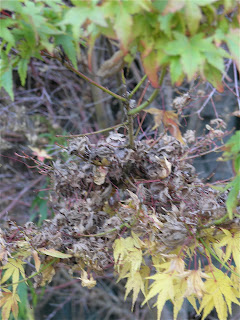 I think they were exposed to more cumulative and higher levels of toxic chemicals in the atmosphere, in the middle of the summer, when UV radiation is more intense; and the most recent growth was spared the worst. 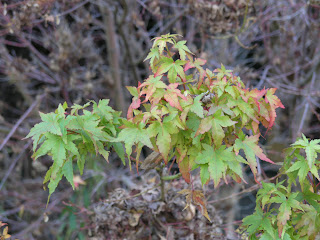 This I believe is an ornamental pear, in typical condition at the moment, which demonstrates that even with some damaged leaves, it's quite abnormal for virtually every other species to be bare or brown. 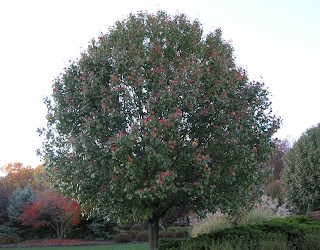 The leaves do show characteristic stippling and spotting. 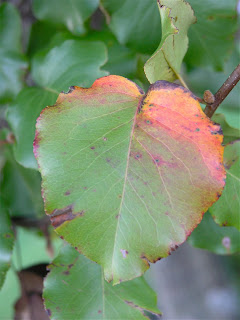 Now oh, check out the landscape. I passed this combine on the way up the hill. 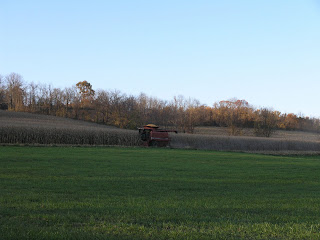 And then shot in various directions from the top. 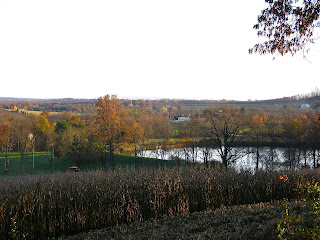 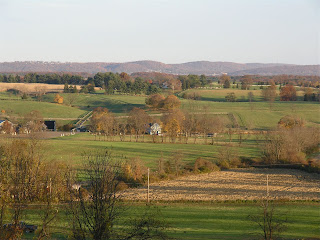 Clicking on the photos will enlarge them, and it becomes more obvious how many leaves are brown. 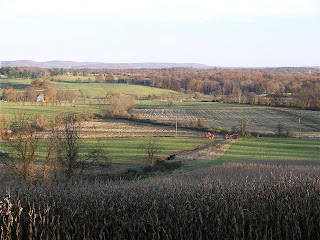 It's still a beautiful vista. 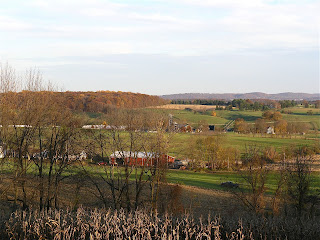