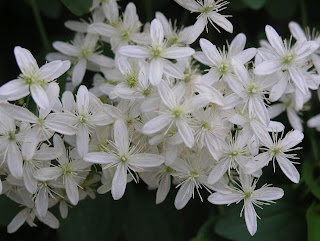 Why is autumn clematis blooming in August? 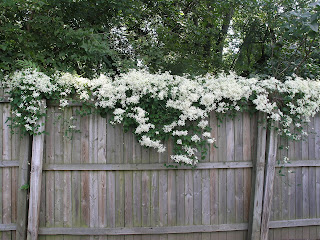 The leaf is showing a loss of chlorophyl. 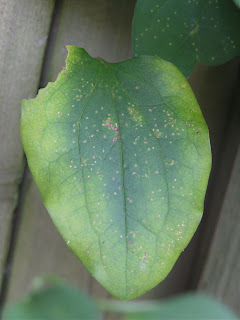 This description is from http://www.extension.umn.edu/yardandgarden/YGLNews/YGLN-July1501.html#ozone which was written in 2001. I'm reprinting it in full because it's so interesting.

Different species, even cultivars, have differing susceptibility to ozone damage.
White pine is most sensitive to ozone damage. It's an indicator species. Silvering is characteristic of ozone damage. The last week of June brought warm temperatures, high humidity and a somewhat unusual phenomenon, at least to Minnesota: Ozone. In the upper atmosphere, ozone (O3) actually serves as a beneficial UV filter. However, when it's produced at ground level due to the spontaneous interaction of heat and pollution, the effects on plants (and humans!) can be serious. Average ozone levels across the state are approximately 30 parts per billion (ppb). During the last week of June, we reached levels as high as 120 ppb!

Ozone is the probably the most common and most damaging form of air pollution. It is a highly reactive form of oxygen that causes a variety of symptoms. Foliar symptoms include flecking (silver or bleached-out spots), tissue death between the veins, stipple (numerous tiny spots of yellow, light tan, red-brown, dark brown, red, black, or purple pigment), mottling (irregular blotches of green, light green, and yellow), yellowing, bronzing, or bleaching. Plant growth may be stunted if foliar symptoms are severe. Flowering and bud formation can be depressed or aborted.

Of course, some plants are more susceptible than others. Conifers, particularly white (Pinus strobus) and jack (P. banksiana) pine frequently show a silvering of the foliage. Other conifers, such as red and Austrian pine, which are more resistant to ozone damage, may develop yellow to brown mottling and tipburn or a yellow to brown or orange-red flecking and banding of the needles. Ozone-killed tissues are readily infected by certain fungi, which may lead to the misdiagnosis of needlecast.

Upon diagnosis of ozone damage, we're confronted with the question of what to do? Every day, each of us inhales about 20,000 liters of air. Every time we breathe, we risk inhaling dangerous chemicals that have found their way into the air. Maybe our plants are trying to tell us something? 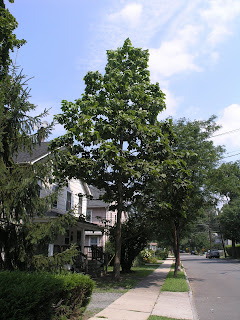 This catalpa tree has droopy leaves. 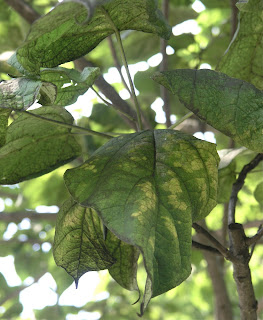 And the leaves up close are covered with aphids, which thrive in high levels of CO2.
Oh sure, not EVERY tree is obviously dead. But let's think of it this way. If you threw 100 people into the deep ocean with no flotation devices, would they all drown at the exact same minute? NOOO. But would they all eventually drown? Of course! (Unless a shark ate them first.)
On to a more cheerful subject, temporarily. I made a stop at our local farmstand, where they have fields of colorful zinnias and other flowers you can pick yourself. 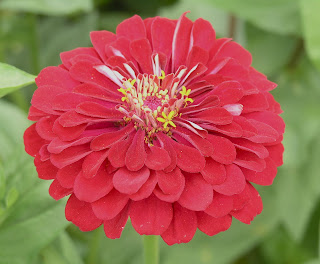 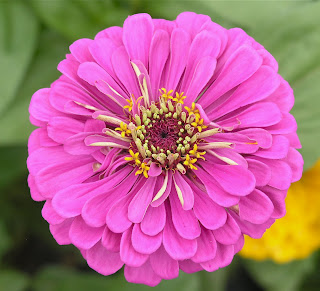 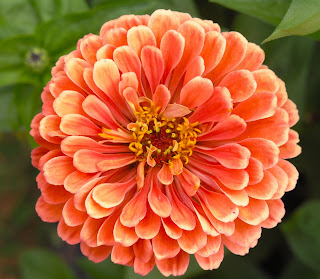 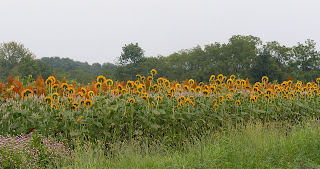 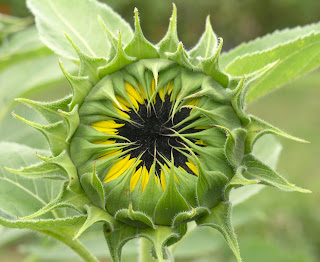 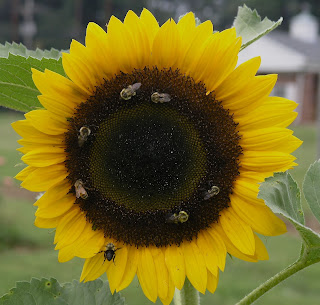 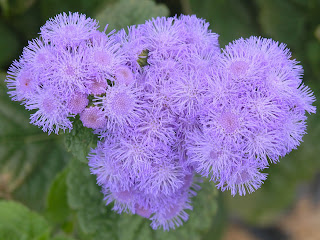 Across the road from the farmstand is a nursery, which recently had to remove some large trees because they were dead. 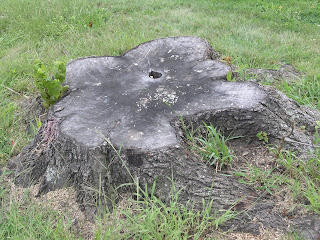 They replaced them with small maples and oaks and this is what their leaves look like. 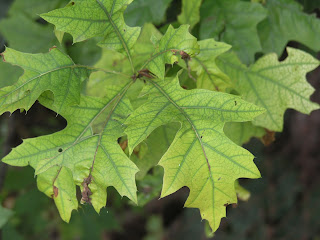 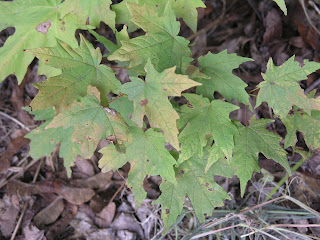 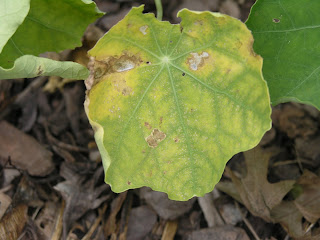 And the tall established trees will soon have to be removed as well. 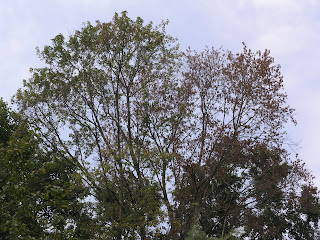 From there I stopped at the Oldwick playground, which is surrounded by orchards. It is shocking to me how the treeline on the far hills is so obviously full of dying trees. 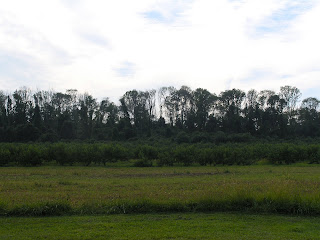 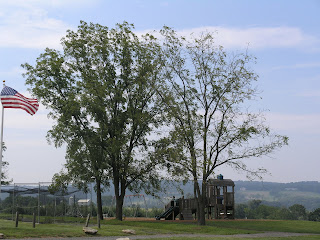 Here is the town library. 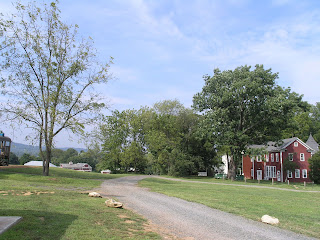 Should apples be falling on the ground in August? I don't know. 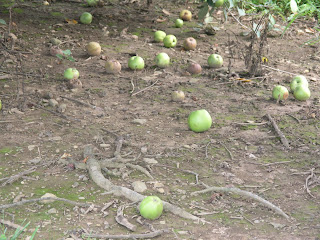 There are so many apples on some of the trees, I have to wonder if it's normal or a phenomena like the pine trees covered with cone, trying to reproduce while they still have a chance. I have seen pear and cherry trees blooming in the last week as well! 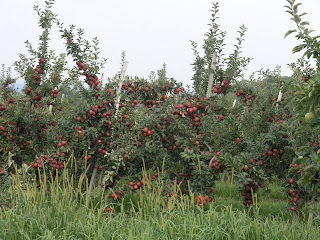 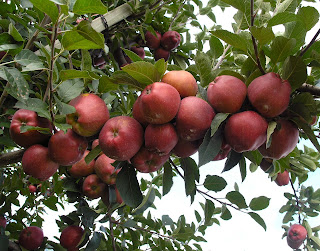 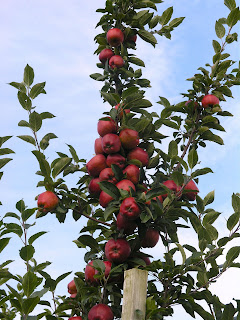 Well, when the crisis hits I hope we humans will share as willingly as Danny and Pipsqueak. 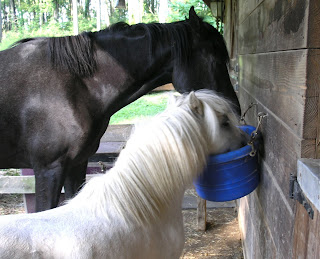 Below is the text of the most recent letter I sent to the lead scientists at the Nasa Jet Propulsion Laboratory, amended according to Paul Kelly's recommendations - let's see if they respond! Skip it, if you've read prior versions!

I apologize for this rather long message but I am hoping you will wade through it and reply or perhaps direct my inquiry to the appropriate department at the Tropospheric Emission Spectrometer Team.

I am not a scientist but I have become very concerned about ozone since last summer, when I started to notice that the deciduous trees in New Jersey where I live were looking sick. Their leaves were turning yellow, some were falling off, and they all looked wilted.

I am a lifelong tree hugger so I pay attention to them, and this didn't seem at all normal to me, particularly because (and this is important!) every single species and specimens of all ages in all circumstances (planted landscapes and wild woodlands) were exhibiting the same damage, which means it can't be due to an individual insect, fungus, or disease.

So I started reading and trying to figure out, with the limited knowledge of science I possess, what might be causing this to occur, because it seemed logical to me that absent any reversal in whatever agent was causing the symptoms of irreversible decline, it was only going to progress and ultimately kill the trees.

I became even more alarmed last fall and winter when the coniferous trees began dropping needles, and in the limited amount of travel I do, it was obvious to me that trees from Massachusetts to Virginia shared the same condition. Since then the rapidity of decay is simply shocking. The trees are smothered by lichens, dropping branches and leaves and needles, and many are completely bare, and the same is true for shrubs.

I have considered and discarded several potential causes, including long term climate change induced lessening of precipitation or patterns of precipitation, and/or snowpack. I eliminated this possibility (although it is still deleterious) because plants in ponds started to show the same inability to process chlorophyll even though they are in water all the time - and potted plants in nurseries and others that are irrigated are also dying. I also eliminated acid rain causing depleted nutrients in soil, since potted fertilized saplings at nurseries appear no healthier.

In short, by process of elimination I have come to believe that it can only be something in the atmosphere, quite likely ozone, since ozone is known to be toxic to vegetation.

So, either we have reached a critical threshold where the ozone level is intolerable to vegetation, or there is another, more recently released agent at work in the atmosphere. This is the most interesting possibility, since ozone has been around for many years whereas the widespread and rapid decay I am seeing is, relatively speaking, quite dramatic and sudden.

I have learned that burning ethanol, which is now being added to gasoline in varying proportions, creates acetaldehyde, which when reacting to sunlight makes peroxyacetyl which in turn, causes extensive damage to vegetation.

So what I am trying to do now is find out if anyone is monitoring the concentration of peroxyacetyl, and its precursor acetaldehyde, on the chance that ethanol is the primary reason plants are suffering. There is also the possibility that stratospheric ozone reduction is allowing increased UV radiation to cause more intense reactions with the emissions of oil products and coal in the troposphere.

It's proving quite difficult for me to find anyone who is specializing in both atmospheric chemistry and botany, and the foresters I have contacted so far have been uniformly dismissive of the evidence that is quite plain to see.

This is all repeated in tedious monotony on my blog, with pictures, if you are interested to take a look at witsendnj.blogspot.com.

I am particularly interested to find out if you know of any monitoring projects for acetaldehyde, or other volatile organic compounds reacting to sunlight, and/or studies about their effects on plants. I might add that to a certain extent I am seeing damage to annual plants recently, as well as to the long-lived trees and shrubs, which is quite frightening to think about in terms of crops.

Thank you so much for your attention,