One of the earliest exchanges I had with most cherished Significant Other was this, from me to him, 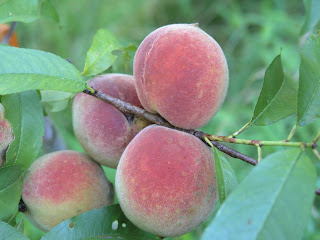 In a heartbeat he replied, "Speaking of Michelangelo..."

Now, THAT is how to fall - exquisitely, tumultuously, and irrevocably - in love.

Peaches are among the most luscious of fruits. There are others that rival its superiority - black raspberries and figs, for example. All fruit, when you come to think of it, are delightful.

But peaches are particularly fragrant, delicately multi-colored, and irresistibly textured. Oh that sweet fuzz, and the silky flesh inside it!

The Oldwick orchards are incomparable. This year, I have for the first time grown my very own, pictured above. Which is naturally breaking my heart, as I expect this will be remembered as the last year any peach trees produce a full crop. 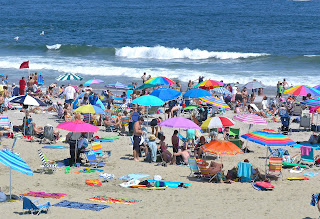 On Friday, I left the Jersey shore and drove to the Morris Arboretum of the University of Pennsylvania, north of Philadelphia, to meet with Marcus Bellet-Travers. He's the representative of the infrared camera being used in the UK that I read about, and he's touring the states to train and present demonstrations. The camera can detect the heat flow from the ground through a tree, and distinguish areas of health...and those of obstructed flow indicating rot, fungus, or other damage. Kind of like a CAT scan, for people, to detect a problem before it manifests itself in symptoms, and is too late to treat. 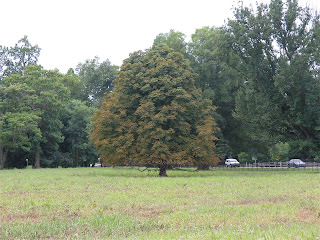 I could see as soon as I neared the entrance that the arboretum was going to yield many terrible and sad examples of compromised trees. 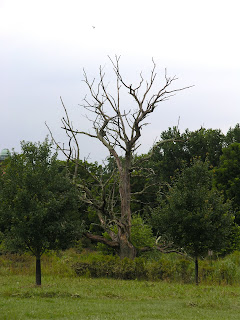 Of course, I couldn't have predicted that I would be unable to go up the main drive, which it turned out, was obstructed by this fallen willow oak, having fallen the night before. I had to drive quite a distance around, and sneak through a back gate, to gain entry. 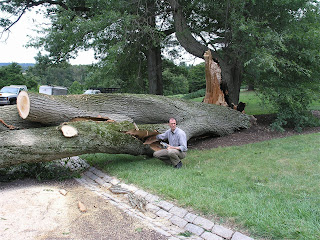 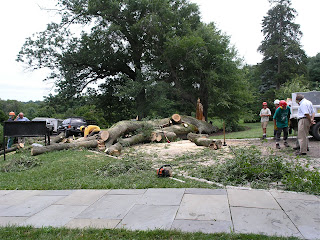 On the part of the tree left standing, this is what the leaves looked like: 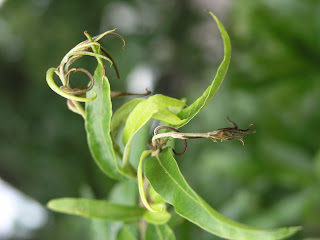 From that bit of carnage we moved on so that Marcus could demonstrate his camera using this gigantic oak as a sample. The camera is an invaluable and revolutionary technology that can diagnose tree pathology before symptoms appear. Usually, by the time symptoms of decline are visible, whether they be scorched or wilted or dropped leaves, fungus and lichens, thin crowns, and/or bare or falling branches, the damage is irreversible - and although there may be methods to provide temporary relief ultimately there is no cure. 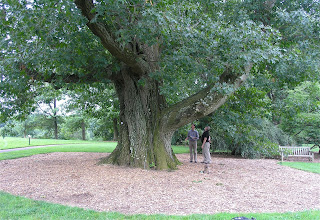 As foresters, Marcus and his host at the arboretum look upon the camera as a tool to save trees by pruning or treating disease or other malfuctions due to environmental stress such as poor drainage perhaps, or nearby paving. Kind of like surgery to keep a cancer tumor from spreading, I suppose.
While they looked through the bark, I looked at the leaves: 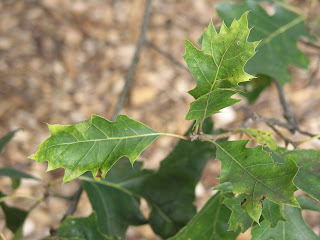 Unlike the arborists, I harbor scant hope any trees in this region can be saved. The value of the camera to me frankly lies in proving this is true. Of course, it is possible that the damage from ozone might be reversible for those specimens where it is not too advanced (a rapidly diminishing proportion) but even if so, that would only be the case if the ozone exposure were to diminish - and we are certainly far, far from that occurring any time soon. Au contraire.

So I would predict that all the trees and shrubs will be dead in very short order, and the question becomes, how quickly can citizens and policy makers be convinced of that, so that the EPA will invoke the clean air act to halt production of ozone-producing emissions, so that we can preserve an atmosphere that will allow annual crops to produce food.

The alternative is famine.

Once I get a package together I am going to search for an academic or government agency who will undertake a scientific study to demonstrate the degree of damage to trees. Perhaps this will spur recourse through the Clean Air Act, which regulates ozone. Scant hope, I know. 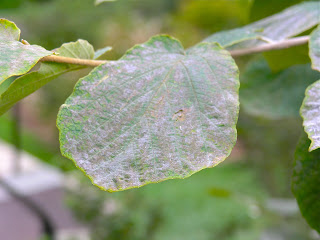 When Marcus asked me my interest in the camera I explained that I believe ozone is killing trees and hope the camera could be used in a study to expose their condition. I pointed to this shrub, I think it's a vibernum, and said "There's a perfect example of leaf damage."
"That has a fungus!" he and our host Rob exclaimed in unison.
Foresters always want to point to fungus, bugs, disease, or acid rain. Those are all treatable. Tropospheric ozone can only be dealt with by stopping emissions from petroleum products and coal, period. And that means a radical re-engineering of the way our society functions. 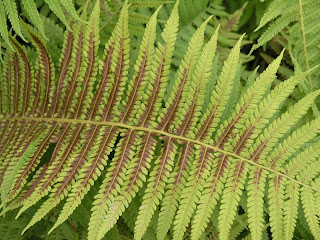 The fern and the basil in the garden next to the cafeteria show the same sort of symptoms. 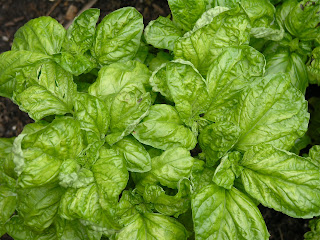 By then it was past one, so I said goodbye to Marcus, who has promised to email me promotional materials, and Rob, a member of the Arboretum staff. I can't remember his exact title and full name, although he did offer me his business card, because I ate it for lunch on the two-hour drive home. It could have used a squirt of lemon and some salt, perhaps a splash of tabasco; but it was a nice chewy source of fiber nonetheless.

But before I left I took just a few minutes to take the usual pictures of trees, followed by a close up of their leaves. 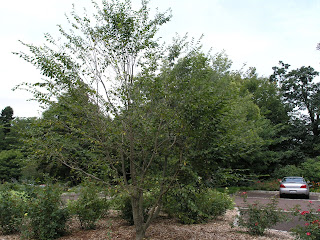 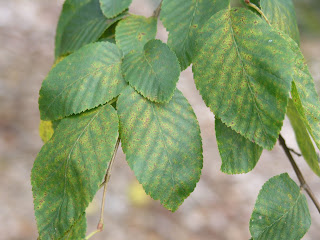 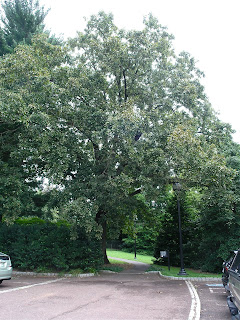 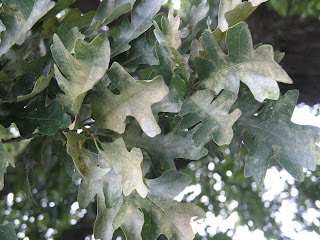 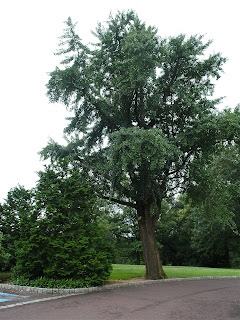 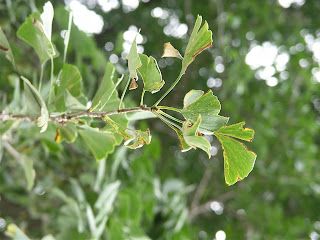 When I got home another lotus was blooming. 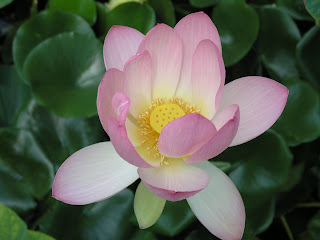 The tell-tale leaves are deteriorating. 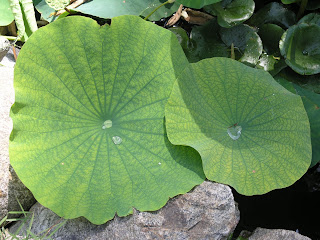 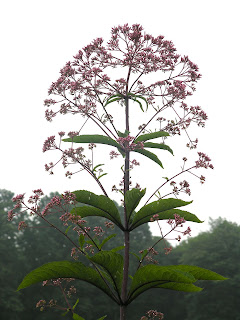 Thanks to Richard Pauli for this link:

We will be seeing many more stories like this one: