I took the train and then the Metro to go to the Earth Day Demonstration at the White House. The first sight that greeted me at the top of the escalator was shocking to this country mouse. 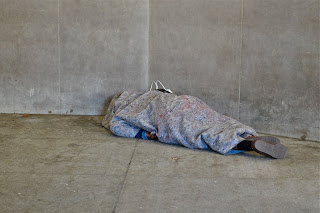 Perhaps he is a veteran. I have read that most homeless people are. 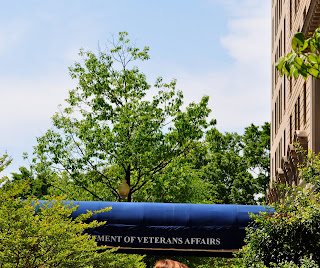 The Department of Veterans Affairs has trees in front that are dying. 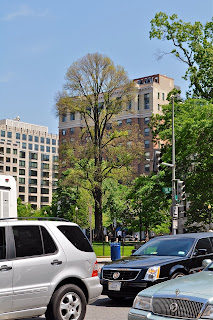 Everywhere I walked in the city, dying trees lined the streets. 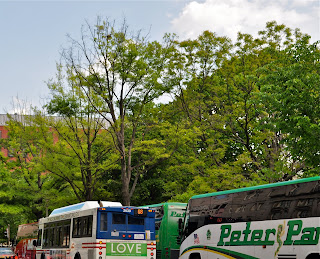 Geneva, who at 18 was our youngest participant, told me she thought this is how trees are supposed to look. 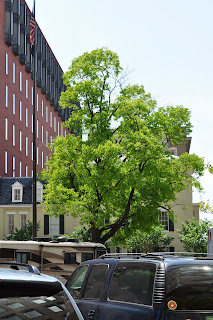 So I explained that trees aren't supposed to have bare branches, and when they do, it means they are in "decline." 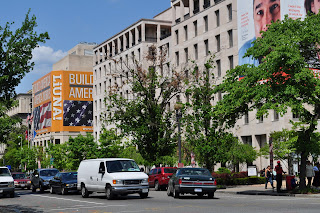 Which is a euphemism for dying. 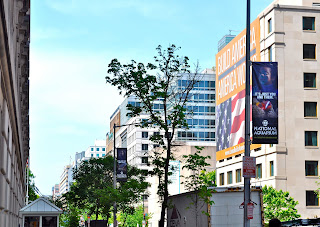 Just like if your fingers and toes fell off, it means something terminal is going on. Better to focus on colorful, cheery vibrancy like this kiosk... 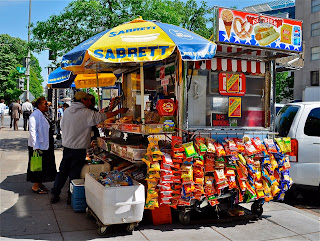 ...and this clever method of transport. 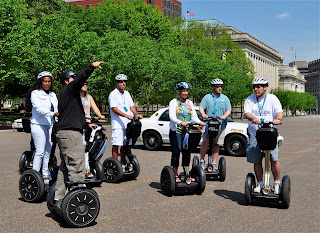 When I entered Lafayette Park, bare branches were silhouetted against the sky behind the statue of General Kosciuszko, 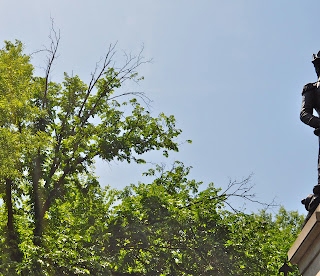 and this Southern Magnolia, which should be dense and lush green, is skeletal. 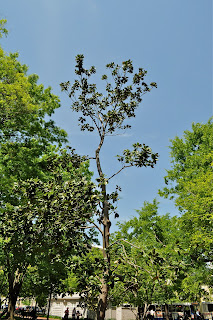 The purpose of our effort was to exhort President Obama to educate the American public on the need to transition to clean energy. The subject is enormous and intimidating, the implications are deeply frightening, so most people prefer to ignore it. That must change. 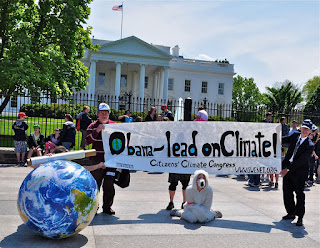 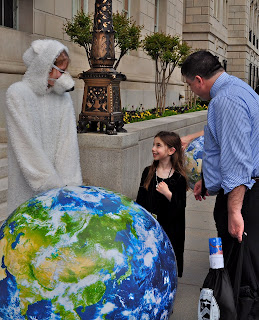 This tree on the White House lawn has plenty of leaves, 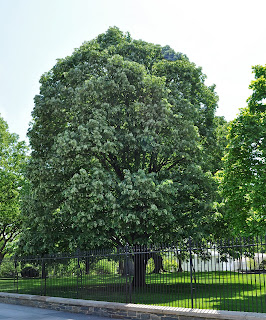 but the degree to which they are limp and wilted is alarming. 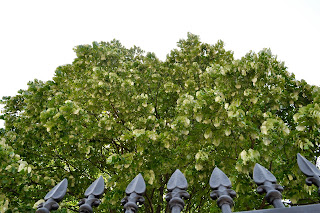 This is true for much of the foliage that has emerged so far this spring. 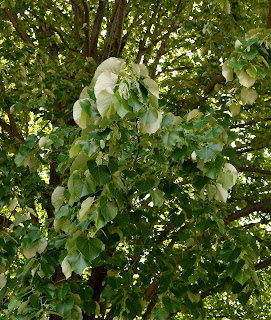 Here is another review of Bill McKibbon's new book, Eaarth, in the UK Guardian. A long-time climate activist and the founder of 350.org, in his book he

"...argues that although they will 'keep battling' for drastic emission reductions to lessen the impacts of climate change, they have 'lost the fight, insofar as our goal was to preserve the world we were born into.'

For that reason, McKibben offers some guidance for living on planet Eaarth: The thing it will require of us, above all, is to leave behind the idea infinite growth will solve all our problems and start thinking about scaling down, relocalising much of our economic life to make it more resilient and less vulnerable to the kind of disruptive change we're now seeing.'"

Following is a comment from a review of the book at climateprogress.org, and following that, my response to the comment:

"Dean Grodzins says:
April 23, 2010 at 12:28 pm
Joe and I are cousins; I’ve known him since we were kids. Bill and I went to high school together and remain friends.

Bill and Joe are very different in style and approach. Bill is spiritual, Protestant, Harvard, rural. He is an essayist and moral crusader who loves Nature (capital N). Joe is secular, Jewish, MIT, urban. He is a scientist and policy guy who, as he says (only half-jokingly), thinks love of nature is misdirected and unrequited.

Yet Bill and Joe agree on the facts. They recognize the immediate, dire threat of climate change–how we are already in a disastrous situation and are facing a catastrophic one. They are fundamentally agreed on what has to be done, and that it has to be done NOW. I’m glad their books came out at the same time. Together, they will spread their urgent, critical message to a wide, diverse audience and inspire many to action."

"Wit's End says:
April 23, 2010 at 2:07 pm
Dean Grodzins, thank you for neatly crystallizing the divergence between the “environmentalist” approach and the “scientific”, CO2-centric viewpoint, as exemplified by these two authors. To me, it is a distinction without a difference, but it appears to have real impacts of policy strategies.

Right now as I write I am riding over the Bay Bridge from Annapolis, on the way home to New Jersey after a rally for Earth Day in front of the White House yesterday. (And dinner with Joe Romm and founding members of the Romm’n'Legions, thank you JR for spending time with us and autographing my copy of Straight Up!)

This bridge is so huge. It is a symbol of how much humans can disrupt and alter the landscape and ecosystem, and simultaneously an impressive reminder what wonders of engineering people are capable of constructing.

One of the convictions that was reinforced in all the discussions yesterday amongst climate activists was, if we are to alter this path to disaster we currently follow, it is really essential for all the thousands of groups, organizations, foundations, and individuals to get together and demand action, with one, united voice."
And lastly tada!!! Here is our picture following dinner with the famous Joe Romm. 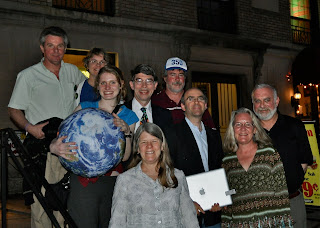